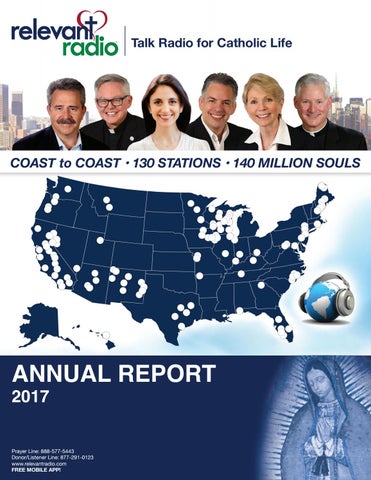 March For Life During this month of prayer for the most vulnerable members of society, Relevant Radio and Immaculate Heart Radio attended and aired special broadcasts from pro-life marches across the country!

History was made on July 3rd. In addition to updating our logo, the merger between Relevant Radio and Immaculate Heart Radio became official. Thank you for all your prayers and support!

On this day, Relevant Radio held a special broadcast of Pope Francis’ Mass in Fatima and the canonization of Saints Francisco and Jacinta.

Relevant Radio took part in the 21-mile walking pilgrimage to the National Shrine of Our Lady of Good Help in Champion, WI.

This month we added 97.3 FM in Madison, WI. This translator will boost signal strength and reach more souls.

Father Rocky celebrates 25 years as a priest On June 14, we gathered to celebrate Father Rocky’s 25th Anniversary of Ordination. It was an evening full of memories and joy.

O CO AST Merging Databases The IT and Accounting Departments were successful in implementing new phone, database, and computer systems.

We were pleased to honor The Men of Christ and Women of Christ Organizations at the 25th Christ Brings Hope Award Dinner in Milwaukee, WI!

Historic Pledge Drive This month, we held our first combined pledge drive, bringing in 9,600 donations totaling over $2.3 Million. Thank you for helping us reach this historical milestone!

Relevant Radio by the Numbers

For every $1 Relevant Radio receives:

5 cents is spent on Fundraising

Brand New Program Schedule! The brand new line-up of shows airing on Relevant Radio began on October 16. This day also marks the launch of the brand new website and app; a historic day for us!

nt programming through media platforms to help people bridge the gap between faith and everyday life.

A MESSAGE FROM FATHER ROCKY

The primary purpose of the merger has been achieved: long-term financial sustainability. Together we set out to raise $30 million in order to reduce long-term debt by 75%. Our supporters enthusiastically supported our dream of creating a national Catholic radio network and allowed us to raise the funds in seven months. Already Relevant Radio is in position to reinvest resources in the critical areas of programming, marketing, digital and social media, and station acquisition. But our greatest joy at Relevant Radio is the knowledge that our programs sparked hope in millions of listeners reaching close to one million individual prayer requests, and countless heartfelt testimonials of lives changed for the better. The response to the Divine Mercy Chaplet is truly encouraging, and the tens of millions of views of our posts on social media and digital platforms, as well

as the millions of sessions of live and podcast listening to our shows is remarkable. I wanted to share all of this information with you and also take this opportunity to remind you that this work goes forward based on prayer, sacrifice, and frequenting the sacraments; the same way the first Christians responded to Our Lord’s call to evangelize. Since the merger, we have continued to grow in many ways and we have goals to reach ever more souls, always with the hope that our programs will help the faithful to be much more active in their faith, so they can live it, love it, and never leave it. Thanks be to God for your generous support! With prayers and best wishes,

On May 24, 2017, the Federal Communications Commission in Washington DC approved the merger of Relevant Radio and Immaculate Heart Radio. Five weeks later, on July 3, the legal part was completed and the sensitive work of brand and program integration began. Starboard Media Foundation, Inc., a Wisconsin not for profit, changed its name to Immaculate Heart Media, Inc., broadcasting as Relevant Radio. Thanks to the extraordinary cooperation and ingenuity of our associates across the country,

on October 16, the one year anniversary of our announcement of the merger, Relevant Radio achieved national brand and program integration and launched a brand new app and website.

2017 was an extraordinary year in the brief but promising history of Catholic radio in the United States of America. After many years of discussion, Relevant Radio® and Immaculate Heart Radio successfully completed the merger of the two largest owned and operated Catholic radio networks in America, thereby assisting the Church in the New Evangelization by broadcasting to 140 million souls across 39 states on over 130 AM/FM stations. Certainly Our Lady, St. Joseph, and the Guardian Angels can be credited with an ‘assist’ on the play. 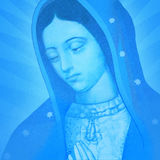 Read all the greatest highlights of 2017 including the merger, Christ Brings Hope award dinners, and more!

Read all the greatest highlights of 2017 including the merger, Christ Brings Hope award dinners, and more!