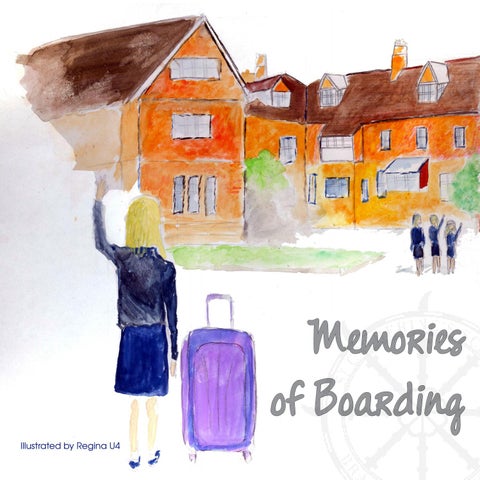 Memories of Boarding Illustrated by Regina U4

I remember Mrs Lowe promising to swim with us in the open air (unheated?) pool if it ever got to 90 degrees in the shade and the wonderful day she made good on her promise, floral swimming cap and all.

I remember always feeling secure at school and being valued for who I was right from the start. I also remember the matterof-fact kindness of the older girls in particular, and how they looked after me if things weren't going well.

The fantastic trust and understanding that Mrs Brown afforded us despite our inability to make toast without burning it and regularly setting off the alarm in the kitchen in the cupboard, bringing the poor housekeeper out in her curlers!

Rushing down to Mrs Leitner's living room for open house every Wednesday evening after roll call. We would just sit around eating and chatting. Eventually it would usually descend into us turning up the music and creating dance routines, some of which we can still crack out today.

You feel as if you have one big family.

The teachers, boarding staff, other girls, and even the cleaners become like your second family, and the school a home away from home like no other.

Large dorms and the snoring (probably me too).

Fried bread and marmalade on Sundays - a combination never bettered!

I remember meals in the dining hall before the self-service came in and the tradition of the youngest being served last and having to clear all the crockery and it being a matter of honour that you had to do it in one go - 10 large china plates, 10 side plates, 10 saucers, 10 bowls, sugar, butter and marmalade on the top and a cup on each digit.

I remember trips to the garage and village for contraband and being soundly told off for being seen walking down the High Street eating in public!

I remember the tuck cupboard under the stairs where you could just about reach into without being seen after lights out if you had left your tuck tin open on the top shelf, not, of course, that I was ever brave enough!

Having a point system for tuck, which was only allowed on a Wednesday evening and Friday evening!

I also remember us all being served a fair amount of “Pimms” at a cocktail party with the teachers to practice our social skills!

I miss those Sundaysâ&#x20AC;&#x2122; breakfasts and roast dinners!

Two baths a week in five inches of water.

I remember people doing illegal hairwashes so that they had clean hair for exeats and hoping no one would notice the wet hair on a day that Mr Goldring, the hairdresser, was not there.

I remember the dreaded drought when we were “hosed down” in a line standing in the baths to save water.

Only changing knickers twice a week - this really stressed me at the time (whites changed twice, navy blues once a week).

Chapel - seven times a week when I first arrived.

We were allowed to have a fair amount of freedom and make our own mistakes.

I remember McWhirter the pig that lived in the School grounds.

Miss Stoner, the Head, invited us for hot chocolate and a film on the television, in her house, one evening.

Spending hours removing a screw from a window so we could get down on to the arches to annoy the U5 who had a dance. Unfortunately we got caught on the test run!

Playing games after lights out and mostly getting caught and told off. Life run by bells.

I remember the endless black and white films that we watched or making reading dens in the piano practice rooms on a Sunday afternoon if it was wet outside.

At the end of Upper 6 – on our last morning waking the boarding house up to chaos loo roll strewn across from Keller to Bronte and running riot for an hour - it seemed like a rite of passage!” (St Cat’s Muck Up Day – a new tradition from the 80’s on!)

Watching Starsky and Hutch in the common room, ‘square bashing’ and film club in the assembly hall on Saturday night.

Lacrosse in the cold, scaring opposition teams with our gum shields as we were one of the first schools to introduce them, cross country up Chinthurst Hill in completely inappropriate footwear (awful!), sneaking out of school for bike rides to Winkworth Arboretum on a summer weekend, tennis in the summer after supper.

Illustrated by Regina U4

Do send us your memories: association@stcatherines.info 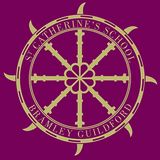