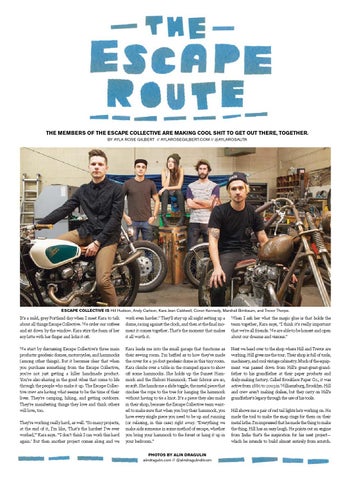 THE MEMBERS OF THE ESCAPE COLLECTIVE ARE MAKING COOL SHIT TO GET OUT THERE, TOGETHER. BY AYLA ROSE GILBERT // AYLAROSEGILBERT.COM // @AYLAROSALITA

ESCAPE COLLECTIVE IS Hill Hudson, Andy Carlson, Kara Jean Caldwell, Conor Kennedy, Marshall Birnbaum, and Trevor Thorpe. It’s a mild, grey Portland day when I meet Kara to talk about all things Escape Collective. We order our coffees and sit down by the window. Kara stirs the foam of her soy latte with her finger and licks it off.

work even harder.” They’ll stay up all night setting up a dome, racing against the clock, and then at the final moment it comes together. That’s the moment that makes it all worth it.

When I ask her what the magic glue is that holds the team together, Kara says, “I think it’s really important that we’re all friends. We are able to be honest and open about our dreams and visions.”

We start by discussing Escape Collective’s three main products: geodesic domes, motorcycles, and hammocks (among other things). But it becomes clear that when you purchase something from the Escape Collective, you’re not just getting a killer handmade product. You’re also sharing in the good vibes that come to life through the people who make it up. The Escape Collective crew are having what seems to be the time of their lives. They’re camping, hiking, and getting outdoors. They’re manifesting things they love and think others will love, too.

Kara leads me into the small garage that functions as their sewing room. I’m baffled as to how they’ve made the cover for a 36-foot geodesic dome in this tiny room. Kara climbs over a table in the cramped space to show off some hammocks. She holds up the Sunset Hammock and the Shibori Hammock. Their fabrics are so, so soft. She hands me a slide toggle, the metal piece that cinches the rope to the tree for hanging the hammock without having to tie a knot. It’s a piece they also make in their shop, because the Escape Collective team wanted to make sure that when you buy their hammock, you have every single piece you need to be up and running (or relaxing, in this case) right away. “Everything we make aids someone in some method of escape, whether you bring your hammock to the forest or hang it up in your bedroom.”

Next we head over to the shop where Hill and Trevor are working. Hill gives me the tour. Their shop is full of tools, machinery, and cool vintage cabinetry. Much of the equipment was passed down from Hill’s great-great-grandfather to his grandfather at their paper products and doily-making factory. Called Brooklace Paper Co., it was active from 1886 to 2003 in Williamsburg, Brooklyn. Hill and crew aren’t making doilies, but they carry on Hill’s grandfather’s legacy through the use of his tools.

They’re working really hard, as well. “So many projects, at the end of it, I’m like, ‘That’s the hardest I’ve ever worked,’” Kara says. “‘I don’t think I can work this hard again.’ But then another project comes along and we

Hill shows me a pair of red tail lights he’s working on. He made the tool to make the snap rings for them on their metal lathe. I’m impressed that he made the thing to make the thing. Hill has an easy laugh. He points out an engine from India that’s the inspiration for his next project— which he intends to build almost entirely from scratch. 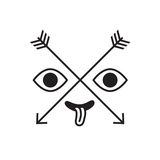