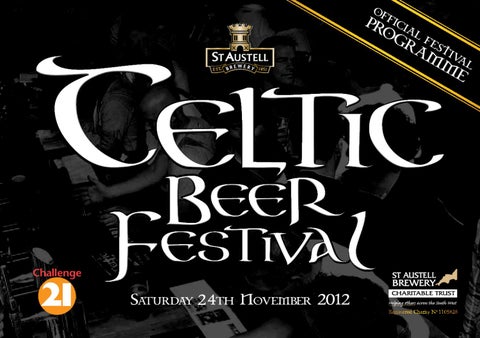 Welcome From James Staughton Welcome From Roger Ryman A Guide To The Cellars &amp; Bars The Top Bar Beers 1 to 76 The Bottom Bar Beers 77 to 126 The Old Rum Store Beers 127 to 166 The Food Bar Food served from 12noon to 9.30pm Live Music From 12noon to 10.30pm Visitor Centre Shop From 11.00am to 5.00pm St Austell Brewery Charitable Trust Our Sponsors £6 off When you spend £30 or more on food in a St Austell Brewery pub.

Welcome to the St Austell Brewery Celtic Beer Festival 2012 On behalf of my colleagues at the Brewery I would like to extend a warm welcome to you to our 14th Festival and my 14th year working behind the Top Bar on the 11am to 2pm shift pulling pints for thirsty customers. Well what a summer! The Diamond Jubilee, the European Football Championships and the Olympics all taking place during the wettest summer for 100 years. Although we had much to celebrate during the Olympics, trade was disappointing but sales of our ales led by Tribute continued to blaze a trail that is bucking the national sales trend of cask ales for yet another year. Exports to over fifteen countries around the world together with sales to supermarkets are now starting to make a significant contribution which is also encouraging. Following the spectacular Olympics we were proud to host eleven of the Team GB ladies rowing team including Cornish girls Helen Glover (Gold medallist) and Annie Vernon. As you can imagine that was another tough day in the office. I keep telling everyone I’m lucky enough to have the best job in the world – now there’s no doubt! Meanwhile on the pub front we have successfully completed major refurbishments at The Globe, Topsham and The Three Crowns, Chagford. We also bought five pubs from Enterprise Inns including our first pub in Bristol – The Albion in Clifton. The other four sites which we are delighted to welcome to our estate are The Blue Ball, Exeter; The Cornish Arms, Tavistock; The George, Plympton and The Rose and Crown, Yealmpton.

During the last few months we have started delivering direct to customers in Bristol and Bath and this is presenting us with some very exciting opportunities. Tribute is being well received by trade customers and consumers alike but, as importantly, so are all our other permanent ales – Dartmoor, Trelawny, Proper Job and HSD. If you believe in strength in numbers today’s Festival illustrates what a wealth of ales we have at our disposal. Congratulations to Roger and his team for brewing up such an amazing line-up of over thirty-five ales! All proceeds from the Festival will go towards the St. Austell Brewery Charitable Trust and this figure is typically in the region of £10,000. I am pleased to announce that our nominated charities for 2013 will be Macmillan Cancer Support and the Phoenix Stroke Appeal. Thank you as always for your generous support. Enjoy yourselves (responsibly) and best wishes for a Happy Christmas and prosperous 2013.

...is available on draught

Welcome back to the Brewery cellars and the 14th annual Celtic Beer Festival. 2012 has been a year of celebrations for Britain, what with the Queen’s Diamond Jubilee, the first ever British win at the Tour de France and outstanding sporting success at the London Olympics and we are pleased to welcome you back to the Brewery cellars to celebrate another great British tradition – BEER!

for their outstanding efforts. More recently and a bit closer to home, both Admiral’s Ale and Proper Job won Gold medals in the beer category at the Taste of the West’s Product Awards 2012. Once again the last six weeks have seen a flurry of activity in our micro brewery and over 20 new recipes have been developed for your enjoyment. As I said before, today’s festival is about celebrating beer and whether you choose to try one of our new special brews or stick with your tried and tested Tribute, please enjoy the day and celebrate sensibly!

We launched Korev as the main lager at last year’s festival and sales have increased by more than 1600% since this time last year! Whilst we are justifiable proud of Korev’s success, cask ale production remains the priority of the brewing team and we are proud to feature Tribute as our lead beer of this year’s festival. In order to meet the ongoing popularity of Tribute and our other beers, we have now installed a new Cask Operations Plant (with improved cold cellar storage) which will allow the racking team to fill a firkin (9 gallon cask) in just 12 seconds, increasing our cask racking capabilities from 120 firkins to 300 firkins an hour. The facility has been designed around optimum energy efficiency, including solar panels which have generated over 45,000kW hours since they were installed one year ago, and is currently one of the largest and most efficient racking plants in the country.

This year has also seen several awards being added to our already overflowing trophy cabinet, but two awards are of particular note. Back in March Tribute was named Regional Cask Ale of the Year 2012 at the Publican’s Supplier Awards in London, the biggest event in the pub industry’s calendar where the best suppliers to the pub trade are recognised

The smoking area is accessed from in front of the Top Bar.

A Guide To The Bars

The Food Bar Available from 12noon to 9.30pm

VIP Ticket Holders Only (Until 6pm)

• We cannot refund any unused beers tokens. • If you require a new glass, please see the upstairs ticket desk. A £1 donation will be required. • Bottled water is available at all bars for 1 token.

A Guide To The Bars

5.8% abv St Austell Brewery Some neck-oil from our Engineering department!

St Austell Brewery Crafted each year for Christmas, this special brew of Tribute is full and malty with a fruity aroma.

4.4% abv St Austell Brewery A golden, fruity and hoppy ale, with just a hint of sweetness.

1913 Original Stout 4.5% abv St Austell Brewery Recreated from our brewing journal of 1913 it has dark roast and a hint of smokiness. Hop Harvest Pale Ale

St Austell Brewery A beer of this strength and character will stand up to being served chilled and lightly carbonated. St Austell Brewery Brewed with Trappist yeast; a rich and complex monastic brew in the style of Belgian monks.

Hell Up Alt Bier 5.6% abv St Austell Brewery Alt beers are dark lager style beers that originate from Düsseldorf. This one has been brewed by Dean Kitley and Rob Orton. Dean is an army child who also holds a German passport. Draught Korev Lager 4.8% abv St Austell Brewery It’s taken us 160 years to create the perfect Cornish lager, but we think you’ll agree it’s been worth the wait. Korev simply means ‘beer’ in Cornish.

Roast chicken, marinated in tandoori sauce with a cooling raita. or Roast leg of pork with homemade apple and cider sauce. A classic hot dog with caramelised onions. Specially made with our award winning ale. Made with mature Cheddar cheese. Specially made for the beer festival.

With Thanks To All Our Food Sponsors

Available In The Old Rum Store

*Please note stated times are approximate and may vary during the day.

In The Old Bond

SHOP ONLINE and Visit our new website to buy online r door. have it all delivered direct to you o.uk p.c sho www.staustellbrewery

SHOP, BAR &amp; TOURS Our Brewery shop and warehouse stocks a great range of wines, spirits, clothin g, gifts and of course all our St Austell bot tled beers - all at special prices.

We are open six days a week all year round with guided tours running every two hours. Monday to Friday: 10am to 5:30pm

Please note there are steep staircases and low ceilings in the brewery, so the tour is not suitable for people with some disabilities. However all visitors are welcome to come into the museum, shop and Hicks Bar.

Open In The Foyer From 11am to 5pm

The Trust supports charities, good causes and individuals in need in our communities. Here are just a few thank yous we have received... “Thank you very much for supporting our Lifeline to the Word project with your generous grant of £620. Your grant will enable 2 people in Cornwall to benefit from one of our specially adapted Sonata sets.” British Wireless for the Blind Fund “Thank you for the cheque your Charitable Trust so kindly donated to Headway, Cornwall for the sum of £500. This will help towards our continuing running costs of the service we provide to brain injured and stroke survivors in Cornwall.” Headway, Cornwall

“To everyone at the Brewery, thank you for helping me to have my rain cover and basket for my pushchair. It keeps me nice and dry and helps Mummy to put her shopping in the basket.” Joel Godfrey – aged 3, disabled since birth

If you would like to nominate a good cause or charity, or would like further information about the trust, please contact us at St Austell Brewery Charitable Trust, 63 Trevarthian Road, St Austell, PL25 4BY or on trust@staustellbrewery.co.uk.

“I’d like to express my gratitude for the generous support CLIC Sargent has received from St Austell Brewery Charitable Trust. Thanks to your support, last year we were able to help two of every three children and young people with cancer who needed us.” CLIC Sargent

Helping Others Across The South West

Thank You To All Our Sponsors

Who Kindly Donated To The Charitable Trust This Year

Terms &amp; Conditions: Offer closes 28th February 2013. Excludes Christmas Eve, New Year’s Eve, Bank Holidays and Valentine’s Day. Only available during normal food service hours. £30 must be spent on food in any one sitting to claim £6 off. No photocopies accepted. Not to be used in conjunction with other offers. Cash value £0.001p. May only be redeemed in any of the outlets listed. Promoter reserves the right to amend or withdraw the offer without prior notice. Promoter: St Austell Brewery, 63 Trevarthian Road, St Austell, PL25 4BY. www.staustellbrewery.co.uk

St Austell Brewery Charitable Trust Every penny of profit from the Beer Festival goes to help local charities. Thank you for coming and thank you for your continued support.

on our app Find it in your smartphone app store.

Please drink sensibly, enjoy the day and please be considerate of our neighbours when you leave.

If you require first aid, please contact a member of the security team or bar staff. 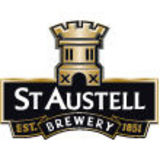