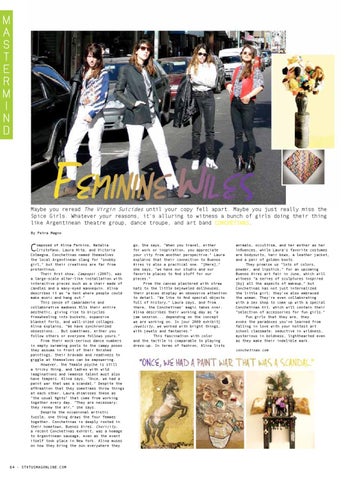 Maybe you reread The Virgin Suicides until your copy fell apart. Maybe you just really miss the Spice Girls. Whatever your reasons, it’s alluring to witness a bunch of girls doing their thing like Argentinean theatre group, dance troupe, and art band CONCHETINAS. By Petra Magno

omposed of Alina Perkins, Natalia Cristofano, Laura Hita, and Victoria Colmegna, Conchetinas named themselves the local Argentinean slang for “snobby girl,” but their creations are far from pretentious. Their first show, Campopsi (2007), was a large-scale altar-like installation with interactive pieces such as a chair made of candles and a many-eyed mannequin. Alina describes it as “a tent where people could make music and hang out.” This sense of camaraderie and collaborative madness fills their entire aesthetic, giving rise to bicycles freewheeling into buckets, expansive blanket forts, and wall-sized collages. Alina explains, “We have synchronized obsessions... But sometimes, either you follow others or everyone follows yours.” From their mock-serious dance numbers in empty swimming pools to the campy poses they assume in front of their finished paintings, their bravado and readiness to giggle at themselves can be empowering. However, the female psyche is still a tricky thing, and ladies with wild imaginations and immense talent must also have tempers. Alina says, “Once, we had a paint war that was a scandal.” Despite the affirmation that they sometimes throw things at each other, Laura dismisses these as “the usual fights” that come from working together every day. “They are necessary; they renew the air,” she says. Despite the occasional artistic tussle, one thing draws the four femmes together. Conchetinas is deeply rooted in their hometown, Buenos Aires. Choricity, a recent Conchetinas exhibit, was a homage to Argentinean sausage, even as the event itself took place in New York. Alina muses on how they bring the sun everywhere they

go. She says, “When you travel, either for work or inspiration, you appreciate your city from another perspective.” Laura explains that their connection to Buenos Aires is also a practical one. “[Here],” she says, “we have our studio and our favorite places to find stuff for our pieces.” From the canvas plastered with straw hats to the little bejeweled dollhouses, their pieces display an obsessive attention to detail. “We like to find special objects full of history,” Laura says, and from there, the Conchetinas’ magic takes over. Alina describes their working day as “a jam session... depending on the concept we are working on. In [our 2009 exhibit] Jewelcity, we worked with bright things, with jewels and fantasies.” This fascination with color and the tactile is comparable to playing dress-up. In terms of fashion, Alina lists

animals, occultism, and her mother as her influences, while Laura’s favorite costumes are bodysuits, hair bows, a leather jacket, and a pair of golden boots. They promise us “lots of colors, powder, and lipstick,” for an upcoming Buenos Aires art fair in June, which will witness “a series of sculptures inspired [by] all the aspects of makeup,” but Conchetinas has not just internalized the little girl; they’ve also embraced the woman. They’re even collaborating with a sex shop to come up with a special Conchetinas Kit, which will contain their “selection of accessories for fun girls.” Fun girls that they are, they evoke the paradoxes you’ve learned from falling in love with your hottest art school classmate: seductive in wildness, mysterious in boldness, lighthearted even as they make their indelible mark. 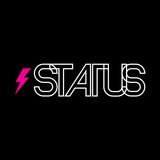