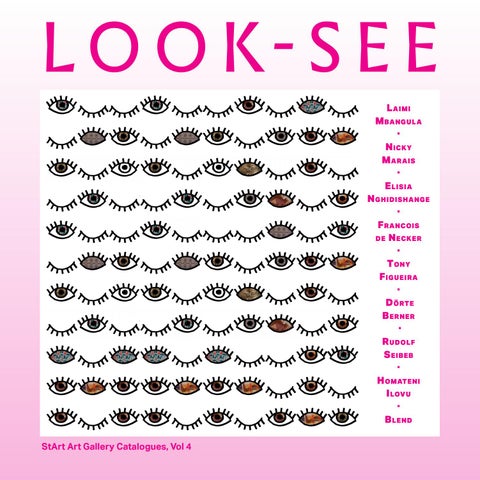 ‘Look-See’ combines the works of

Repetition is a tool used in many of the artworks in ‘Look-See’. Psychoanalyst Jacques Lacan writes about “The Unconscious and Repetition” and describes the concept of tuché, in which specific repetition opens the possibility for our usual, mechanical and sterile ‘automated’ repetitive processes to be challenged. In the work of Laimi Mbangula we see motifs in their distilled form; abstracted patterns drawn from baskets and other everyday traditional items. Similarly, repetition comes into the work of Nicky Marais. The biomorphic shapes in her works create multi-layered groupings. The term biomorph is used to describe a form that suggests a living organism, as was common in the works of Joan Miro (the 20th century Spanish painter). Through the layered use of flattened symbolic images, Mbangula and Marais transform the patterns found in various aspects of life into new and stimulating compositions.

eight visual and two performing artists, whose works are drawn together because of their explicit or indirect relation to abstraction. Playing on the idea of the English idiom ‘to have a look-see’, this exhibition draws attention to the act of looking, seeing and interacting with artworks. To ‘have a look-see’ generally describes the act of briefly looking at something to determine its status, to see if it is working or not. In a world where we are inundated with visual cues, we often adopt this ‘quick look’ as we literally and metaphorically scroll from one picture, advertisement, news story, etc to the next. Abstraction complicates this looking process. How do we look at something that has been consciously manipulated to show something other than a direct depiction of something worldly? Abstraction can invite looking that stems from a deeper level of interaction, that asks the viewer to identify with the artwork beyond relating to the purely representational. Discussions around abstraction in the artistic process can quickly move beyond a simple dichotomy of representation and nonrepresentation. In the works on display this dichotomy is complicated in various ways.

Abstraction often comes into play when artists are confronted with depicting the intangible world of thoughts, dreams or spiritual experiences. Dörte Berner carves carefully into stone to create and reveal human figures. These figures do not fight the form of the rock but rather appear to have always been rooted in the structure of 1

toward and even beyond its limits. Both Nghidishange and Figueira offer a specific and partial view of the world and in so doing suggest a the starting point of a larger narrative.

the material itself. In the “Devotion” series these dense and heavy forms are presented in the act of worship, linking the ethereal with the physical plane. Similarly Rudolf Seibeb’s artworks largely focus on the human form, often drawing on the world of dreams, lingering in the space between abstraction and representation. Homateni Ilovu’s artworks, like the works of Berner and Seibeb, draw from the non-physical world of thoughts and perception. His surreal collages bring together moments of abstraction, figurative drawing and text that express specific, sometimes activist stances.

While abstraction in visual art dominates this exhibition it is worth recalling the inherent abstraction present in other artforms. The sublime qualities in the works “Criss-Cross” and “Palimpsest” by Francois de Necker signify an imagined landscape in which the viewer is invited into a personal relationship of understanding the artist’s visual world. Perhaps this work can be likened to that of music and listeners, where relatability may not necessarily come from a shared spoken language, but from an invitation to occupy and interact in an alternative shared soundscape. The music by Blend is created from the duo bringing out aspects of their individuality to create a new, shared flow of sound.

Abstraction offers interesting opportunities for different kinds of storytelling and narration. Elisia Nghidishange repeats the motif of ostrich egg-shell beads and other symbols of wealth in her prints, offering an interruption and critique of older narratives of what is means to be wealthy. Nghidishange’s prints often depict a closely cut portion of a scene in which human action takes place. This careful cropping is also evident in the photography of Tony Figueira. In his exploration of macro photography Figueira’s work highlights the photographer’s mission to push the medium of photography

Moving away from passive looking to active and open engagement is what ‘Look-See’ invites viewers to attempt. As the repetitive automaton movement of our eyes blinking open and shut, looks and sees, perhaps it can also tuché; interrupt and offer new perceptions and insights. 2

Elisia Nghidishange was born in Eenhana in northern Namibia. This printmaker, sculptor and mixed media artist graduated from the College of the Arts in Windhoek in 2016. Nghidishange has taken part in various group exhibitions locally, and last year opened her first solo exhibition titled The Cost of Wealth at the Goethe Institut. Nghidishangeâ&amp;#x20AC;&amp;#x2122;s work explores the relationship between the pursuit of wealth and the place of tradition in a contemporary and cosmopolitan society.

Rudolf Seibeb lives and works in Okahandja. Seibeb was selftaught before studying at the John Muafangejo Art Centre in the 1990s. Often working as a painter with conventional materials, Seibeb also explores diverse materials such as wood, sand, iron, animal skins, concrete, tree roots and clay. Seibebâ&amp;#x20AC;&amp;#x2122;s content largely focuses on the human form. Seibebâ&amp;#x20AC;&amp;#x2122;s works reflect a dreamlike quality, and linger in the space between abstraction and representation, showcasing the ambiguity of such a dichotomy.

DÓ§rte Berner has worked as a stone sculptor in Namibia for over 50 years. With over 40 solo exhibitions locally and internationally, Bernerâ&amp;#x20AC;&amp;#x2122;s work has become well-known for its distinct style and character. Bernerâ&amp;#x20AC;&amp;#x2122;s works have been collected privately and are held in public collections across four continents. The artist carves carefully into stone to create and reveal human and abstract figures rooted in a personal or communal narrative.

Late photographer Tony Figueira was born in Huambo, Angola but moved to Windhoek, in his early childhood. Figueiraâ&amp;#x20AC;&amp;#x2122;s interest in photography took off after completing a degree in journalism from Rhodes University in Grahamstown, South Africa, in 1984. Figueiraâ&amp;#x20AC;&amp;#x2122;s photojournalist approach to photography is distinctive in his work and forms a large part of his oeuvre. However, Figueira also experimented with the abstract potential of photography.

Windhoekbased painter Francois De Necker is best known for his non-figurative paintings that are inspired in large part by his private environment and the Namibian landscape. Often taking on an allegorical atmosphere, his artworks are a reflection on urban and rural Namibia. He has had numerous exhibitions and private commissions and his work can be found in both public and private collections.

Having graduated from the College of the Arts in 2016, Laimi Mbangula is currently furthering her studies at the University of Namibia. Mbangula was born in Eenhana in northern Namibia. She has participated in a number of group exhibitions since 2013 and held her first solo exhibition titled Inside the Room at StArt Art Gallery lin 2017. Laimi Mbangula works primarily in fibre arts, producing largescale textiles which are often hand-dyed and stenciled with a repeat pattern.

Homateni Ilovu is a multidisciplinary artist living and working in Windhoek. Often working with themes of poverty and consumerism, Ilovu has described his process as â&amp;#x20AC;&amp;#x153;an exploration of found objects and discarded materials... These artworks cover aspects of consumerism and popular culture in which the status of poor and rich people of Katutura are identifiedâ&amp;#x20AC;?. Ilovu studied at the College of the Arts in Windhoek, has had one solo exhibition and participated in various group exhibitions.

Nicky Marais is well-known for her abstract artworks created using a vocabulary of abstract forms and colour relationships that originate from the sociopolitical history of the Namibian people and the Namibian landscape. Marais has exhibited locally and internationally. She is currently the Head of Department of Visual Arts at the College of the Arts. In 2017, The National Art Gallery of Namibia (NAGN) hosted a solo exhibition by Marais, Presence in Absence.

Blend is formed of the duo of Khoes, born Nesindano Namises, and Christian Poloni. Blend is inspired by blues, neo-soul, Afro-jazz-funk and contemporary folk sounds, this dynamic pair fuses poetry, smooth vocals and edgy tones. This duo uses an unusual open-D tuning inspired by Richie Havens. Blend are poets and storytellers, they say “It’s really not that simple for us, yet. We’ve settled for folk infused sounds, rich with organic Namibian flows with hints and textures of international influences. The style has many different ‘feelings’ ranging from neo-soul to jazz to blues to rock, but is characterised largely by its original elements that come from our individuality. The ‘blend’ is usually served as African Folk Funk”.

‘Look-See’ combines the works of eight visual and two performing artists, whose works are drawn together because of their explicit or indirect relation to abstraction. Playing on the idea of the English idiom ‘to have a look-see’, this exhibition draws attention to the act of looking, seeing and interacting with artworks. To ‘have a look-see’ generally describes the act of briefly looking at something to determine its status, to see if it is working or not. In a world where we are inundated with visual cues, we often adopt this ‘quick look’ as we literally and metaphorically scroll from one picture, advertisement, news story, etc to the next. 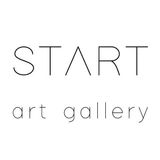