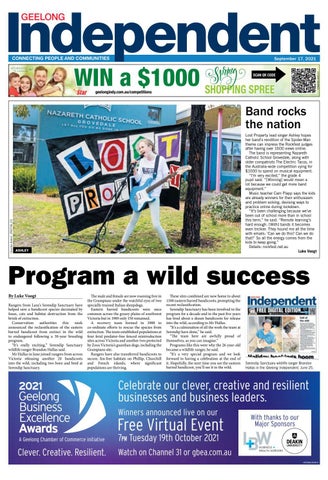 Band rocks the nation Lost Property lead singer Ashley hopes her band’s rendition of the Spider-Man theme can impress the Rockfest judges after having over 1600 views online. The band is representing Nazareth Catholic School Grovedale, along with older compatriots The Electric Tacos, in the Australia-wide competition vying for $1000 to spend on musical equipment. “I’m very excited,” the grade 4 pupil said. “[Winning] would mean a lot because we could get more band equipment.” Music teacher Cam Plapp says the kids are already winners for their enthusiasm and problem solving, devising ways to practice online during lockdown. “It’s been challenging because we’ve been out of school more than in school this term,” he said. “Remote learning’s hard enough. [With] bands it becomes even trickier. They hound me all the time with emails: ‘Can we do this? Can we do that?’ So all the energy comes from the kids to keep going.” Details: rockfest.net.au Luke Voogt

Program a wild success By Luke Voogt Rangers from Lara’s Serendip Sanctuary have helped save a bandicoot species decimated by foxes, cats and habitat destruction from the brink of extinction. Conservation authorities this week announced the reclassification of the eastern barred bandicoot from extinct in the wild to endangered following a 30-year breeding program. “It’s really exciting,” Serendip Sanctuary wildlife ranger Brandon Hallas said. Mr Hallas in June joined rangers from across Victoria releasing another 20 bandicoots into the wild, including two born and bred at Serendip Sanctuary.

The male and female are now roaming free in the Grampians under the watchful eyes of two specially-trained Italian sheepdogs. Eastern barred bandicoots were once common across the grassy plains of southwest Victoria but in 1989 only 150 remained. A recovery team formed in 1988 to co-ordinate efforts to rescue the species from extinction. The team established populations at four feral predator-free fenced reintroduction sites across Victoria and another two protected by Zoos Victoria’s guardian dogs, including the Grampians site. Rangers have also transferred bandicoots to secure, fox-free habitats on Phillip, Churchill and French islands, where significant populations are thriving.

These sites combined are now home to about 1500 eastern barred bandicoots, prompting the recent reclassification. Serendip Sanctuary has been involved in the program for a decade and in the past five years has bred about a dozen bandicoots for release into the wild, according to Mr Hallas. “It’s a culmination of all the work the team at Serendip have done,” he said. “The team here are awfully proud of themselves, as you can imagine.” Programs like this were why the 26-year-old became a wildlife ranger, he said. “It’s a very special program and we look forward to having a celebration at the end of it. Hopefully, the next time you see the eastern barred bandicoot, you’ll see it in the wild.

Celebrate our clever, creative and resilient businesses and business leaders. Winners announced live on our

Watch on Channel 31 or gbea.com.au

With thanks to our Major Sponsors