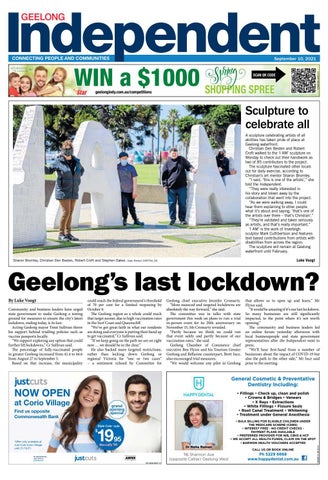 Sculpture to celebrate all A sculpture celebrating artists of all abilities has taken pride of place at Geelong waterfront. Christian Den Besten and Robert Croft walked to the ‘I AM’ sculpture on Monday to check out their handiwork as two of 85 contributors to the project. The sculpture fascinated other locals out for daily exercise, according to Christian’s art mentor Sharon Bromley. “I said, ‘this is one of the artists’,” she told the Independent. “They were really interested in his story and blown away by the collaboration that went into the project. “As we were walking away, I could hear them explaining to other people what it’s about and saying, ‘that’s one of the artists over there – that’s Christian’.” “They’re validated and taken seriously as artists, and that’s really important.” ‘I AM’ is the work of Inverleigh sculptor Mark Cuthbertson and features text-based contributions from artists with disabilities from across the region. The sculpture will remain at Geelong waterfront until February. Luke Voogt

Geelong’s last lockdown? Community and business leaders have urged state government to make Geelong a testing ground for measures to ensure the city’s latest lockdown, ending today, is its last. Acting Geelong mayor Trent Sullivan threw his support behind trialling policies such as vaccine passports locally. “We support exploring any option that could further lift lockdowns,” Cr Sullivan said. The percentage of fully-vaccinated people in greater Geelong increased from 41.4 to 46.6 from August 27 to September 5. Based on that increase, the municipality

could reach the federal government’s threshold of 70 per cent for a limited reopening by October 9. The Geelong region as a whole could reach that target sooner, due to high vaccination rates in the Surf Coast and Queenscliff. “We’ve got great faith in what our residents are doing and everyone is putting their hand up to get vaccinated,” Cr Sullivan said. “If we keep going on the path we are on right now … we should be in the clear.” He also backed more targeted restrictions, rather than locking down Geelong or regional Victoria for “one or two cases” – a sentiment echoed by Committee for

Geelong chief executive Jennifer Cromarty. “More nuanced and targeted lockdowns are absolutely the way forward,” she said. The committee was in talks with state government this week on plans to run a trial in-person event for its 20th anniversary on November 15, Ms Cromarty revealed. “Partly because we think we could run that event safely and partly because of our vaccination rates,” she said. Geelong Chamber of Commerce chief executive Ben Flynn and his Tourism Greater Geelong and Bellarine counterpart, Brett Ince, also encouraged trial measures. “We would welcome any pilot in Geelong

that allows us to open up and learn,” Mr Flynn said. “It would be amazing if it’s our last lockdown. So many businesses are still significantly impacted, to the point where it’s not worth opening.” The community and business leaders led an online forum yesterday afternoon with local businesspeople and state government representatives after the Independent went to press. “We’ll hear first-hand from a number of businesses about the impact of COVID-19 but also the path to the other side,” Mr Ince said prior to the meeting.