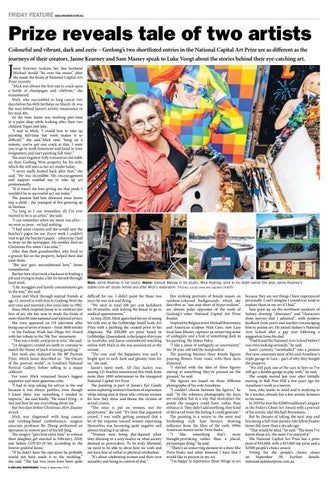 Prize reveals tale of two artists Colourful and vibrant, dark and eerie – Geelong’s two shortlisted entries in the National Capital Art Prize are as different as the journeys of their creators. Janne Kearney and Sam Massey speak to Luke Voogt about the stories behind their eye-catching art.

anne Kearney reckons her late husband Michael would “be over the moon” after she made the finals of National Capital Art Prize recently. “Mick was always the first one to crack open a bottle of champagne and celebrate,” she remembered. Mick, who succumbed to lung cancer two days before his 60th birthday on March 18, was the man behind Janne’s artistic renaissance in her mid-40s. At the time Janne was working part-time in a paint shop while looking after their two children Tegan and Jake. “I said to Mick, ‘I would love to take up painting full-time but work makes it so difficult’,” she said.“Mick said, ‘hang on a minute, you’ve got one crack at this. I want you to go to work tomorrow and hand in your resignation, and start painting full-time’.” The asset engineer fully restored an old stable on their Geelong West property for his wife, which she still uses as her art studio today. “I never really looked back after that,” she said. “He was incredible. His encouragement and support enabled me to take up art professionally. “If it wasn’t for him giving me that push, I wouldn’t be as successful as I am today.” The passion had lain dormant since Janne was a child – the youngest of five growing up in Norlane. “As long as I can remember, all I’ve ever wanted to be is an artist,” she said. “I can remember when my mum was alive – we were so poor– we had nothing. “I had some crayons and she would save the butcher’s paper for me. Every week I couldn’t wait to get the butcher’s paper – otherwise I had to draw on the newspaper. My mother died on Christmas Eve when I was nine.” After that their grandmother, who lived in a granny flat on the property, helped their dad raise them. “She just gave unconditional love,” Janne remembered. But her love of art took a backseat to finding a job and trying to make a life for herself through hard work. “Life, struggles and family commitments got in the way,” she said. Janne met Mick through mutual friends at age 15, moved in with him to Geelong West the next year and married a few years later in 1982. Since Mick inspired Janne to re-embrace her love of art, she has won or made the finals of more than 80 international and national prizes. She even appeared on US television after being one of seven winners – from 3600 entries – in the Fashion Week San Diego Art Award with her tribute to the ‘Me Too’ movement. “That was a really cool prize to win,” she said. “[A designer] created an outfit or costume to match the theme of [each winning painting].” Her work also featured in the BP Portrait Prize, which Janne described as “the Oscars of the portrait world”, in London’s National Portrait Gallery, before selling to a major collector. For years Mick remained Janne’s biggest supporter and most generous critic. “I had to stop asking for advice in the end because it was always positive, even though I knew there was something I needed to improve,” she said fondly. “He wasn’t lying – it was just how he saw everything about me.” But two days before Christmas 2019, disaster struck. Mick was diagnosed with lung cancer, and Geelong-based cardiothoracic surgeon associate professor Bo Zhang performed an operation to remove part of his left lung. The surgery “gave him extra time” to witness their daughter get married in February, 2020, just before COVID-19 hit, according to the forever grateful Janne. “If he didn’t have the operation he probably would not have made it to the wedding,” she said. “The last two years have been quite 8 GEELONG INDEPENDENT Friday, 3 September, 2021

Main: Janne Kearney in her studio. Above: Samuel Massey in his studio; Mick Kearney, prior to his death earlier this year; Janne Kearney’s stable-com-art studio before and after Mick’s restoration. (Pictures: Louisa Jones and supplied) 249059

difficult for me. I didn’t paint for those two years he was sick and dying. “We were in total 100 per cent lockdown for 18 months, only leaving the house to go to medical appointments.” In July, 2020, Mick again had the joy of seeing his wife win at the Lethbridge Small Scale Art Prize with a painting she created prior to his diagnosis. The $20,000 art prize based in Lethbridge, Queensland, is the largest of its type in Australia, and Janne remembered watching online with Mick as she was announced as the winner. “The roar and the happiness was such a bright spot in such dark and gloomy time for us,” she said. Janne’s latest work, All Day Sucker, was among 121 finalists announced this week from more than 1000 submissions in the inaugural National Capital Art Prize. The painting is part of Janne’s Eye Candy series exploring women’s freedom of expression while taking aim at those who criticise women for how they dress and blame the victims of sexual crimes. “The onus is put on women, not the perpetrator,” she said. “It’s time that argument ceased. I was really getting annoyed that a lot of the response toward women expressing themselves was becoming quite negative and almost treating it as taboo. “Women were being slut-shamed when they dressing in a sexy matter or what society deemed as provocative. To be truly liberated, we need to be able to dress how we wish and not have fear of verbal or physical retribution. “It’s about celebrating women and their own sexuality and being in control of that.”

Her striking portraits of female muses on rainbow-coloured backgrounds, which she describes as “one step short of hyper-realism”, are almost polar opposites of the work of Geelong’s other National Capital Art Prize finalist. Inspired by Belgian artist Michaël Borremans and American sculptor Nick Cave, new Lara local Sam Massey captures an unnerving sense of ambiguity and a hint of something dark in his painting The Hokey Pokey. “I like a sense of ambiguity or uncertainty,” the 28-year-old told the Independent. The painting features three female figures pouring flowers from vases, with their faces distorted. “I started with the idea of three figures staring at something they’ve poured on the ground,” he said. The figures are based on three different photographs of his wife Anneliese. “I couldn’t choose between the figures,” he said. “In the reference photography the faces are included, but in a way that neutralises the power the imagery could have, rather than enhance it. They didn’t add anything, they kind of detracted from the feeling it could generate.” The painting is a return to the eerie and foreboding style Sam favours, drawing influence from the likes of the early 1990s American horror series Twin Peaks. “I like something that’s more thought-provoking rather than a placid, picturesque thing,” he said. “There’s an unnerving element to a show like Twin Peaks and other interests I have that I would like to present in my art. “I’m happy to experience those things in art

because they are not things I have experienced personally. I can’t imagine I would ever want to explore them in my art if I had.” Sam grew up on the northwest outskirts of Sydney drawing “dinosaurs” and “characters from movies that I admired”, with positive feedback from peers and teachers encouraging him to pursue art. He joined Sydney’s National Arts School after a gap year following a suggestion from his dad. “Dad found the National Arts School before I was even looking seriously,” he said. Sam’s curiosity “snowballed” into a passion that now consumes most of his and Anneliese’s triple garage in Lara – part of why they bought the property. “We still park one of the cars in here so I’ve still got a double garage to play with,” he said. The couple moved last year after initially moving to Bell Post Hill a few years ago for Anneliese’s work as a lawyer. Sam, who works in retail and is studying to be a teacher, already has a few artistic honours to his name. In 2019 he won the $2000 traditional category in the Fisher’s Ghost Art Award with a portrait of his artistic idol Michaël Borremans. But he dreams of taking the next step and becoming a full-time painter, like fellow finalist Janne did more than a decade ago. “That would be ideal,” he said. “The more I’ve learnt about art, the more I’ve enjoyed it.” The National Capital Art Prize has a prize pool of $45,000, with a $15,000 top prize and a $2500 people’s choice award. Voting for the people’s choice closes on September 30. Further details: nationalcapitalartprize.com.au 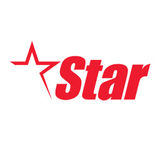