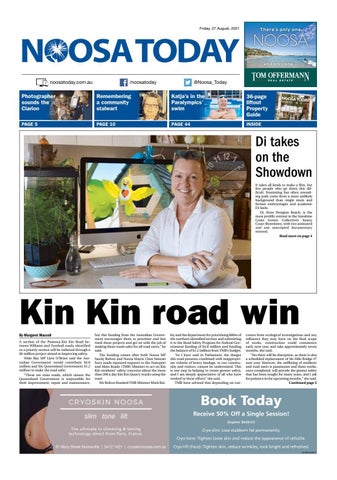 Katja’s in the Paralympics’ swim

Di takes on the Showdown It takes all kinds to make a film, but few people who go down this difficult, frustrating but often rewarding path come from a more unlikely background than single mum and former embryologist and academic Di Seels. Di, from Peregian Beach, is the most prolific entrant in the Sunshine Coast Screen Collective’s Sunny Coast Showdown, with two animated and one unscripted documentary entered. Read more on page 4

Kin Kin road win By Margaret Maccoll A section of the Pomona-Kin Kin Road between Williams and Turnbull roads, identified as a priority section will be widened through a $6 million project aimed at improving safety. Wide Bay MP Llew O’Brien said the Australian Government would contribute $4.8 million and the Queensland Government $1.2 million to make the road safer. “These are state roads, which means the Queensland Government is responsible for their improvement, repair and maintenance,

but this funding from the Australian Government encourages them to prioritise and fast track these projects and get on with the job of making these roads safer for all road users,” he said. The funding comes after both Noosa MP Sandy Bolton and Noosa Mayor Clare Stewart have made repeated requests to the Transport and Main Roads (TMR) Minister to act on Kin Kin residents’ safety concerns about the more than 200 a day Kin Kin Quarry trucks using the road. Ms Bolton thanked TMR Minister Mark Bai-

ley and the department for prioritising 800m of the northern identified section and submitting it to the Road Safety Program for Federal Government funding of $4.8 million and funding the balance of $1.2 million from TMR’s budget. “As I have said in Parliament, the danger this road presents combined with inappropriate volume of heavy haulage, to our community and visitors, cannot be understated. This is one step in helping to create greater safety, and I am deeply appreciative of all who have worked in these efforts” she said. TMR have advised that depending on out-

comes from ecological investigations and any influence they may have on the final scope of works, construction could commence early next year and take approximately seven months, she said. “Yes there will be disruption, as there is also a scheduled replacement of Six Mile Bridge #7 next year. However, the wellbeing of residents and road users is paramount and these works, once completed, will provide the greater safety that has been sought for many years, and I ask for patience in the upcoming months,” she said. Continued page 5

The ultimate in slimming & toning technology direct from Paris, France.