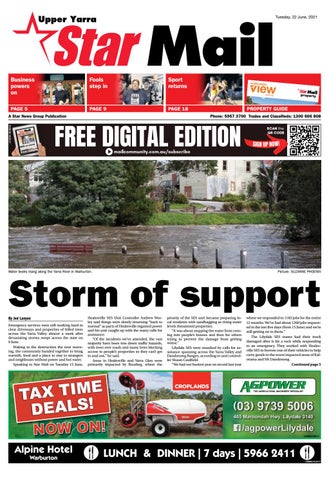 Water levels rising along the Yarra River in Warburton.

Storm of support By Jed Lanyon Emergency services were still working hard to clear driveways and properties of felled trees across the Yarra Valley almost a week after devastating storms swept across the state on 9 June. Waking to the destruction the next morning, the community banded together to bring warmth, food and a place to stay to strangers and neighbours without power and hot water. Speaking to Star Mail on Tuesday 15 June,

Healesville SES Unit Controller Andrew Worley said things were slowly returning “back to normal” as parts of Healesville regained power and his unit caught up with the many calls for assistance. “Of the incidents we’ve attended, the vast majority have been tree down traffic hazards, with trees over roads and many trees blocking access to people’s properties so they can’t get in and out,” he said. Areas in Healesville and Yarra Glen were primarily impacted by flooding, where the

priority of the SES unit became preparing local residents with sandbagging as rising water levels threatened properties. “It was about stopping the water from coming into people’s houses and then for others trying to prevent the damage from getting worse.” Lilydale SES were smashed by calls for assistance spanning across the Yarra Valley and Dandenong Ranges, according to unit controller Shaun Caulfield. “We had our busiest year on record last year

where we responded to 1183 jobs for the entire 12 months. We’ve had about 1260 jobs requested in the last five days (from 15 June) and we’re still getting on to them.” The Lilydale SES teams had their truck damaged after it hit a rock while responding to an emergency. They worked with Healesville SES to borrow one of their vehicles to help carry goods to the worst impacted areas of Kalorama and Mt Dandenong. Continued page 5