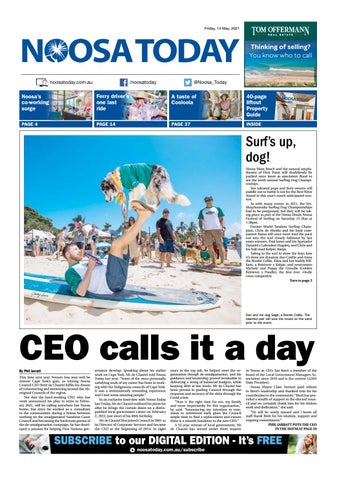 A taste of Cooloola

Surf’s up, dog! Noosa Main Beach and the natural amphitheatre of First Point will doubtlessly be packed once more as spectators flood to see the tenth annual Surfing Dog Championships. Ten talented pups and their owners will paddle out to battle it out for the Best Wave Award in this year’s much anticipated contest. As with many events in 2021, the VetShopAustralia Surfing Dog Championships had to be postponed, but they will be taking place as part of the Noosa Heads Noosa Festival of Surfing on Saturday 15 May at 1:30pm. Former World Tandem Surfing Champion, Chris de Aboitiz and his loyal companion Rama will once more lead the pack out into the surf closely followed by last years winners, Paul Jones and his Spanador (Spaniel x Labrador) Hugsley, and Chris and his ball-mad Kelpie, Banjo. Taking to the surf to show the boys how it’s done are dynamic duo Caitlin and Anna the Border Collie, Eliza and her buddy William, a Retriever x Kelpie, and newcomers Michele and Poppy the Groodle (Golden Retriever x Poodle), the first ever -Oodle cross competitor. Turn to page 2

Dan and his dog Sage, a Border Collie. The talented pair will wow the crowd on the sand prior to the event.

CEO calls it a day By Phil Jarratt This time next year Noosa’s loss may well be remote Cape York’s gain, as retiring Noosa Council CEO Brett de Chastel fulfils his dream of volunteering and mentoring around the Aboriginal Councils of the region. Not that the hard-working CEO, who last week announced his plan to retire in February 2022, will be calling anywhere but Noosa home, but since he worked as a consultant to the communities during a hiatus between working on the amalgamated Sunshine Coast Council and becoming the backroom genius of the de-amalgamation campaign, he has developed a passion for helping First Nations gov-

ernance develop. Speaking about his earlier work on Cape York, Mr de Chastel told Noosa Today last year: “Some of the most personally satisfying work of my career has been in working with the Indigenous councils of Cape York. It was a tremendously rewarding experience and I met some amazing people.” In an exclusive interview with Noosa Today last Friday, Mr de Chastel outlined his plans for after he brings the curtain down on a distinguished local government career on February 2, 2022, just short of his 60th birthday. Mr de Chastel first joined Council in 2001 as its Director of Corporate Services and became the CEO at the beginning of 2014. In eight

years in the top job, he helped steer the organisation though de-amalgamation, and his guidance and leadership proved invaluable in delivering a string of balanced budgets, while keeping debt at low levels. Mr de Chastel has been pivotal in guiding Council through the response and recovery of the shire through the Covid crisis. “Now is the right time for me, my family and more importantly for this organisation,” he said. “Announcing my intention to transition to retirement early gives the Council ample time to find a replacement and ensure there is a smooth handover to the new CEO.” A 32-year veteran of local government, Mr de Chastel has served under three mayors

in Noosa as CEO, has been a member of the board of the Local Government Managers Association since 2016 and is the current LGMA State President. Noosa Mayor Clare Stewart paid tribute to Brett’s leadership and thanked him for his contribution to the community. “Brett has provided a wealth of support to the elected council and we certainly thank him for his tireless work and dedication,” she said. “He will be sorely missed and I know all staff thank Brett for his wisdom, support and ongoing commitment.” PHIL JARRATT PUTS THE CEO IN THE HOTSEAT PAGE 29