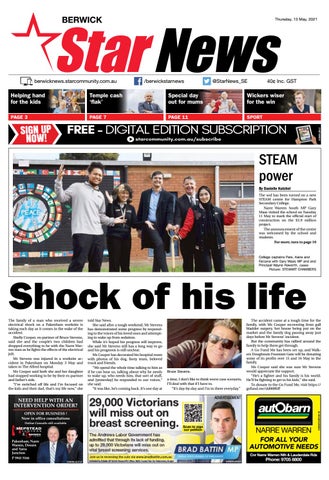 Helping hand for the kids

Special day out for mums

Wickers wiser for the win

STEAM power By Danielle Kutchel The sod has been turned on a new STEAM centre for Hampton Park Secondary College. Narre Warren South MP Gary Maas visited the school on Tuesday 11 May to mark the official start of construction on the $3.9 million project. The announcement of the centre was welcomed by the school and students. For more, turn to page 10

Shock of his life told Star News. She said after a tough weekend, Mr Stevens has demonstrated some progress by responding to the voices of his loved ones and attempting to wake up from sedation. While it’s hoped his progress will improve, she said Mr Stevens still has a long way to go and his prognosis is still unclear. Ms Cooper has decorated his hospital room with photos of his dog, footy team, beloved truck and friends. “We spend the whole time talking to him as if he can hear us, talking about why he needs to wake up, who needs him, that sort of stuff, and [yesterday] he responded to our voices,” she said. “It was like, he’s coming back. It’s one day at

Bruce Stevens. a time, I don’t like to think worst case scenario, I’ll deal with that if I have to. “It’s day-by-day and I’m in there everyday.”

The accident came at a tough time for the family, with Ms Cooper recovering from gall bladder surgery, her house being put on the market and the family dog passing away just days before Mr Stevens’ incident. But the community has rallied around the family to help them get through. A Go Fund Me has been set up, and Walkers Doughnuts Fountain Gate will be donating some of its profits over 15 and 16 May to the family. Ms Cooper said she was sure Mr Stevens would appreciate the support. “He’s a fighter and his family is his world. He’ll be fighting to get to his kids,” she said. To donate to the Go Fund Me, visit https:// gofund.me/dd608bff

NARRE WARREN FOR ALL YOUR AUTOMOTIVE NEEDS

The family of a man who received a severe electrical shock on a Pakenham worksite is taking each day as it comes in the wake of the accident. Shelly Cooper, ex-partner of Bruce Stevens, said she and the couple’s two children had dropped everything to be with the Narre Warren man as he fights the effects of the electrical jolt. Mr Stevens was injured in a worksite accident in Pakenham on Monday 3 May and taken to The Alfred hospital. Ms Cooper said both she and her daughter had stopped working to be by their ex-partner and father’s side. “I’ve switched off life and I’m focused on the kids and their dad, that’s my life now,” she