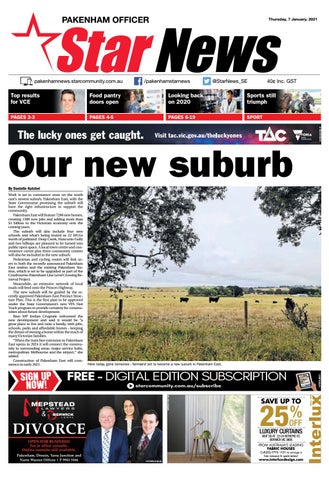 Our new suburb By Danielle Kutchel Work is set to commence soon on the south east’s newest suburb, Pakenham East, with the State Government promising the suburb will have the right infrastructure to support the community. Pakenham East will feature 7200 new homes, creating 1300 new jobs and adding more than $1 billion to the Victorian economy over the coming years. The suburb will also include four new schools and what’s being touted as 22 MCGs worth of parkland. Deep Creek, Hancocks Gully and two hilltops are planned to be turned into public open space. A local town centre and convenience centre plus three community centres will also be included in the new suburb. Pedestrian and cycling routes will link users to both the recently announced Pakenham East station and the existing Pakenham Station, which is set to be upgraded as part of the Cranbourne-Pakenham Line Level Crossing Removal Project. Meanwhile, an extensive network of local roads will feed onto the Princes Highway. The new suburb will be guided by the recently approved Pakenham East Precinct Structure Plan. This is the first plan to be approved under the State Government’s new VPA Fast Track program to provide certainty for communities about future development. Bass MP Jordan Crugnale welcomed the new development and said it would be “a great place to live and raise a family, with jobs, schools, parks and affordable homes - keeping the dream of owning a home within the reach of many Victorian families. “When the train line extension to Pakenham East opens in 2024 it will connect the community to surrounding areas, major service hubs, metropolitan Melbourne and the airport,“ she added. Construction of Pakenham East will commence in early 2021.