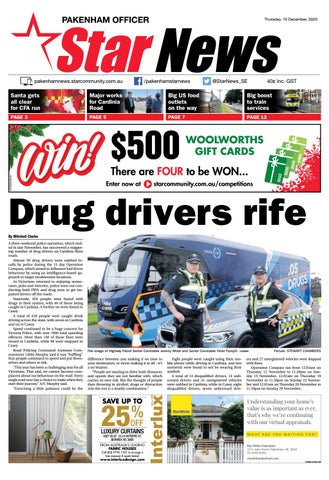 Santa gets all clear for CFA run

Big US food outlets on the way

There are FOUR to be WON...

difference between you making it on time to your destination, or never making it at all - it’s a no brainer. “People are starting to drive both distances and speeds they are not familiar with, which carries its own risk. But the thought of people then throwing in alcohol, drugs or distraction into the mix is a deadly combination.” Since 1989

A three-weekend police operation, which ended in late November, has uncovered a staggering number of drug drivers on Cardinia Shire roads. Almost 50 drug drivers were nabbed locally by police during the 15 day Operation Compass, which aimed to influence bad driver behaviour by using an intelligence-based approach to target troublesome locations. As Victorians returned to enjoying restaurants, pubs and wineries, police were out conducting both PBTs and drug tests to get impaired drivers off the roads. Statewide, 454 people were found with drugs in their system, with 46 of those being caught in Cardinia. A further six were found in Casey. A total of 410 people were caught drink driving across the state, with seven in Cardinia and six in Casey. Speed continued to be a huge concern for Victoria Police, with over 7000 total speeding offences. More than 150 of those fines were issued in Cardinia, while 60 were snapped in Casey. Road Policing Command Assistant Commissioner Libby Murphy said it was “baffling” that people continued to speed and put themselves and others at risk. “This year has been a challenging year for all Victorians. That said, we cannot become complacent about our behaviour on the road. Every single road user has a choice to make when they start their journey,” A/C Murphy said. “Exercising a little patience could be the

Understanding your home’s value is as important as ever, that’s why we’re continuing with our virtual appraisals. W H AT A R E YO U WA I T I N G F O R ?