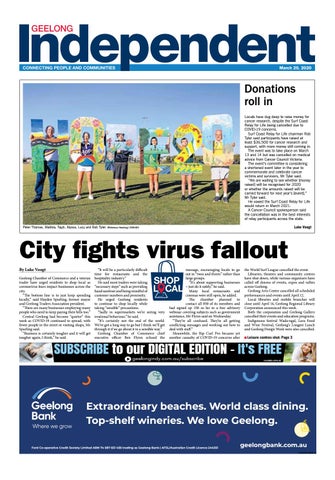 Donations roll in Locals have dug deep to raise money for cancer research, despite the Surf Coast Relay for Life being cancelled due to COVID-19 concerns. Surf Coast Relay for Life chairman Rob Tyler said participants have raised at least $36,500 for cancer research and support, with more money still coming in. The event was to take place on March 13 and 14 but was cancelled on medical advice from Cancer Council Victoria. The event’s committee is considering a shortened event later in the year to commemorate and celebrate cancer victims and survivors, Mr Tyler said. “We are waiting to see whether [money raised] will be recognised for 2020 or whether the amounts raised will be carried forward for next year’s [event],” Mr Tyler said. He vowed the Surf Coast Relay for Life would return in March 2021. A Cancer Council spokesperson said the cancellation was in the best interests of relay participants across the state. Luke Voogt

City ights virus fallout By Luke Voogt Geelong Chamber of Commerce and a veteran trader have urged residents to shop local as coronavirus fears impact businesses across the city. “he bottom line is to just keep spending locally,” said Hayden Spurling, former mayor and Geelong Traders Association president. “here are many businesses employing many people who need to keep paying their bills too.” Central Geelong had become “quieter” this week as COVID-19 continued to spread, with fewer people in the street or visiting shops, Mr Spurling said. “Business is certainly tougher and it will get tougher again, I think,” he said.

“It will be a particularly diicult time for restaurants and the hospitality industry.” He said most traders were taking “necessary steps” such as providing hand sanitiser and being mindful of customer numbers and proximity. He urged Geelong residents to continue to shop locally while taking “sensible” precautions. “Sadly in supermarkets we’re seeing very irrational behaviour,” he said. “It’s certainly not the end of the world. We’ve got a long way to go but I think we’ll get through it if we go about it in a sensible way.” Geelong Chamber of Commerce chief executive oicer Ben Flynn echoed the

message, encouraging locals to go out in “twos and threes” rather than large groups. “It’s about supporting businesses – just do it safely,” he said. Many local restaurants and cinemas were still open, he added. he chamber planned to contact all 850 of its members and had signed up 150 so far to a free advisory webinar covering subjects such as government assistance, Mr Flynn said on Wednesday. “hey’re all confused. hey’re all getting conlicting messages and working out how to deal with staf.” Meanwhile, the Rip Curl Pro became yet another casualty of COVID-19 concerns ater