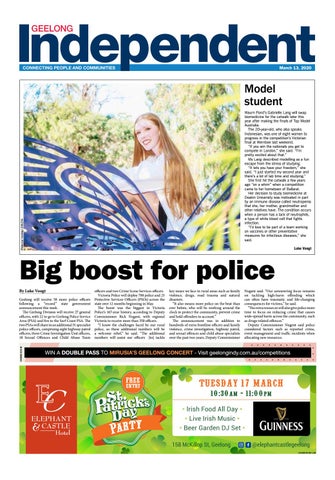 Waurn Pond’s Gabrielle Lang will swap biomedicine for the catwalk later this year after making the inals of Top Model Australia. The 20-year-old, who also speaks Indonesian, was one of eight women to progress in the competition’s Victorian inal at Werribee last weekend. “If you win the nationals you get to compete in London,” she said. “I’m pretty excited about that.” Ms Lang described modelling as a fun escape from the stress of studying. “It lets you have your freedom,” she said. “I just started my second year and there’s a lot of lab time and studying.” She irst hit the catwalk a few years ago “on a whim” when a competition came to her hometown of Ballarat. Her decision to study biomedicine at Deakin University was motivated in part by an immune disease called neutropenia that she, her mother, grandmother and other relatives have. The condition occurs when a person has a lack of neutrophils, a type of white blood cell that ights infection. “I’d love to be part of a team working on vaccines or other preventative measures for infectious diseases,” she said. Luke Voogt

oicers and two Crime Scene Services oicers. Victoria Police will deploy 788 police and 25 Protective Services Oicers (PSOs) across the state over 12 months beginning in May. he boost was the biggest in Victoria Police’s 167-year history, according to Deputy Commissioner Rick Nugent, with regional Victoria to receive more than 350 oicers. “I know the challenges faced by our rural police, so these additional numbers will be a welcome relief,” he said. “he additional numbers will assist our oicers [to] tackle

key issues we face in rural areas such as family violence, drugs, road trauma and natural disasters. “It also means more police on the beat than ever before, who will be working around the clock to protect the community, prevent crime and hold ofenders to account.” he announcement was in addition to hundreds of extra frontline oicers and family violence, crime investigation, highway patrol, and sexual ofences and child abuse specialists over the past two years, Deputy Commissioner

Nugent said. “Our unwavering focus remains on tackling high-harm ofending which can oten have traumatic and life-changing consequences for victims,” he said. “he extra resources will also give police more time to focus on reducing crime that causes wide-spread harm across the community, such as drugs-related ofences.” Deputy Commissioner Nugent said police considered factors such as reported crime, event management and traic incidents when allocating new resources.