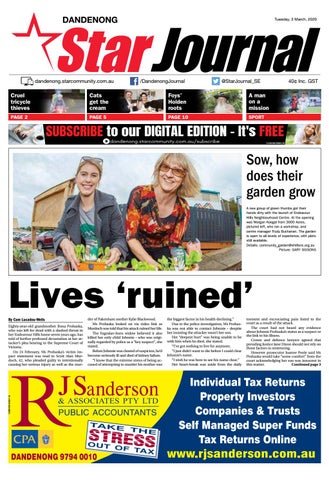 Cats get the cream

A man on a mission

Sow, how does their garden grow A new group of green thumbs got their hands dirty with the launch of Endeavour Hills Neighbourhood Centre. At the opening was Morgan Koegal from 3000 Acres, pictured left, who ran a workshop, and centre manager Trudy Buchanan. The garden is open to all levels of experience, with plots still available. Details: community_garden@ehillsnc.org.au Picture: GARY SISSONS

Eighty-year-old grandmother Ilona Prohaska, who was left for dead with a slashed throat in her Endeavour Hills home seven years ago, has told of further profound devastation at her attacker’s plea hearing in the Supreme Court of Victoria. On 24 February, Ms Prohaska’s victim impact statement was read to Scott Alan Murdoch, 42, who pleaded guilty to intentionally causing her serious injury as well as the mur-

der of Pakenham mother Kylie Blackwood. Ms Prohaska looked on via video link as Murdoch was told that his attack ruined her life. The Yugoslav-born widow believed it also killed her only child Johnnie - who was originally regarded by police as a “key suspect”, she stated. Before Johnnie was cleared of suspicion, he’d become seriously ill and died of kidney failure. “I know that the extreme stress of being accused of attempting to murder his mother was

the biggest factor in his health declining.” Due to the police investigation, Ms Prohaska was not able to contact Johnnie - despite her insisting the attacker wasn’t her son. Her “deepest hurt” was being unable to be with him when he died, she stated. “I’ve got nothing to live for anymore. “I just didn’t want to die before I could clear Johnnie’s name. “I wish he was here to see his name clear.” Her heart-break was aside from the daily

torment and excruciating pain listed to the court as a result of the attack. The court had not heard any evidence about Johnnie Prohaska’s status as a suspect or the link to his illness. Crown and defence lawyers agreed that presiding Justice Jane Dixon should not rely on those factors in sentencing. However prosecutor Joanne Poole said Ms Prohaska would take “some comfort” from the court acknowledging her son was innocent in this matter. Continued page 3