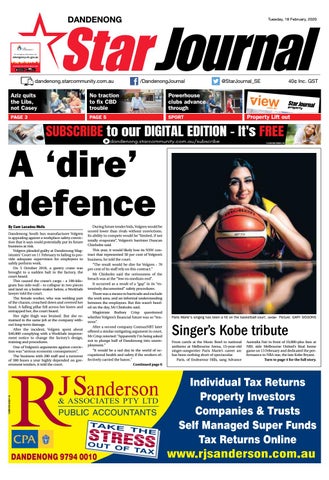 Aziz quits the Libs, not Casey

No traction to fix CBD trouble

A ‘dire’ defence By Cam Lucadou-Wells

Dandenong South bus manufacturer Volgren is appealing against a workplace safety conviction that it says could potentially put its future business at risk. Volgren pleaded guilty at Dandenong Magistrates’ Court on 11 February to failing to provide adequate supervision for employees to safely perform work. On 5 October 2018, a gantry crane was brought to a sudden halt in the factory, the court heard. This caused the crane’s cargo - a 100-kilogram bus side-wall - to collapse in two pieces and land on a boiler-maker below, a WorkSafe lawyer told the court. The female worker, who was welding part of the chassis, crouched down and covered her head. A falling pillar fell across her knees and entrapped her, the court heard. Her right thigh was bruised. But she remained in the same job at the company without long-term damage. After the incident, Volgren spent about $40,000 complying with a WorkSafe improvement notice to change the factory’s design, training and procedures. One of Volgren’s arguments against conviction was “serious economic consequences”. The business with 280 staff and a turnover of 380 buses a year highly depended on government tenders, it told the court.

During future tender bids, Volgren would be scored lower than rivals without convictions. Its ability to compete would be “limited, if not totally evaporate”, Volgren’s barrister Duncan Chisholm said. This year, it would likely lose its NSW contract that represented 50 per cent of Volgren’s business, he told the court. “The result would be dire for Volgren - 70 per cent of its staff rely on this contract.” Mr Chisholm said the seriousness of the breach was at the “low-to-medium end”. It occurred as a result of a “gap” in its “extensively documented” safety procedures. There was a means to barricade and exclude the work area, and an informal understanding between the employees. But this wasn’t heeded on the day, Mr Chisholm said. Magistrate Rodney Crisp questioned whether Volgren’s financial future was so “tenuous”. After a second company CoxmaxNBT later offered a similar mitigating argument in court, Mr Crisp retorted: “Apparently I’m being asked not to plunge half of Dandenong into unemployment.” “It would be a sad day in the world of occupational health and safety if the workers effectively carried the baton.” Continued page 6

Paris Marie's singing has been a hit on the basketball court. 204584 Picture: GARY SISSONS

Singer’s Kobe tribute From carols at the Music Bowl to national anthems at Melbourne Arena, 15-year-old singer-songwriter Paris Marie’s career arc has been nothing short of spectacular. Paris, of Endeavour Hills, sang Advance

Australia Fair in front of 10,000-plus fans at NBL side Melbourne United’s final home game on 13 February and dedicated the performance to NBA star, the late Kobe Bryant. Turn to page 4 for the full story.