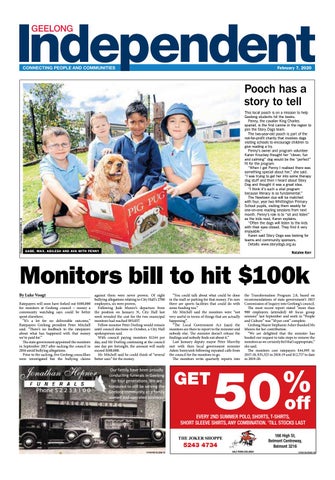 Pooch has a story to tell This local pooch is on a mission to help Geelong students hit the books. Penny, the cavalier King Charles spaniel, is the irst canine in the region to join the Story Dogs team. The two-year-old pooch is part of the not-for-proit charity that involves dogs visiting schools to encourage children to give reading a try. Penny’s owner and program volunteer Karen Knuckey thought her “clever, fun and calming” dog would be the “perfect” it for the program. “When I got Penny I realised there was something special about her,” she said. “I was trying to get her into some therapy dog stuff and then I heard about Story Dog and thought it was a great idea. “I think it’s such a vital program because literacy is so fundamental.” The Newtown duo will be matched with four, year two Whittington Primary School pupils, visiting them weekly for one-on-one reading sessions from next month. Penny’s role is to “sit and listen” as the kids read, Karen explains. “Often the dogs will listen to the kids with their eyes closed. They ind it very enjoyable.” Karen said Story Dogs was looking for teams and community sponsors. Details: www.storydogs.org.au GABE, MAX, ABILESH AND AVA WITH PENNY

Monitors bill to hit $100k By Luke Voogt Ratepayers will soon have forked out $100,000 for monitors at Geelong council – money a community watchdog says could be better spent elsewhere. “It’s a lot for no deliverable outcome,” Ratepayers Geelong president Peter Mitchell said. “here’s no feedback to the ratepayers about what has happened with that money we’ve paid for.” he state government appointed the monitors in September 2017 ater sacking the council in 2016 amid bullying allegations. Prior to the sacking, ive Geelong councillors were investigated but the bullying claims

against them were never proven. Of eight bullying allegations relating to City Hall’s 2700 employees, six were proven. Following Jude Munro’s departure from the position on January 31, City Hall last week revealed the cost for the two municipal monitors had reached $93,037. Fellow monitor Peter Dorling would remain until council elections in October, a City Hall spokesperson said. With council paying monitors $1244 per day, and Mr Dorling continuing at the council one day per fortnight, the amount will easily exceed $100,000. Mr Mitchell said he could think of “several better uses” for the money.

“You could talk about what could be done in the mall or parking for that money. I’m sure there are sports facilities that could do with some funding too.” Mr Mitchell said the monitors were “not very useful in terms of things that are actually happening”. “he Local Government Act (says) the monitors are there to report to the minister and nobody else. he minister doesn’t release the indings and nobody inds out about it.” Last January deputy mayor Peter Murrihy met with then local government minister Adem Somyurek following repeated calls from the council for the monitors to go. he monitors write quarterly reports into

the Transformation Program 2.0, based on recommendations of state government’s 2015 Commission of Inquiry into Geelong’s council. he most recent report stated “more than 900 employees (attended) 68 focus group sessions” last September and work in “People and Culture” was “10 per cent” complete. Geelong Mayor Stephanie Asher thanked Ms Munro for her contribution. “We are delighted that the minister has heeded our request to take steps to remove the monitors as we certainly feel that’s appropriate,” she said. he monitors cost ratepayers $44,995 in 2017-18, $35,325 in 2018-19 and $12,717 to date in 2019-20.