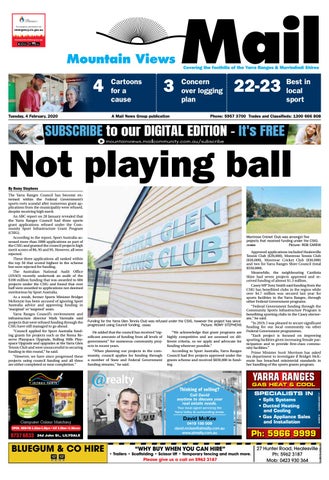 Cartoons for a cause

Not playing ball By Romy Stephens The Yarra Ranges Council has become entwined within the Federal Government’s sports rorts scandal after numerous grant applications from the municipality were refused, despite receiving high merit. An ABC report on 28 January revealed that the Yarra Ranges Council had three sports grant applications refused under the Community Sport Infrastructure Grant Program (CSIG). According to the report, Sport Australia assessed more than 2000 applications as part of the CSIG and granted the council projects high merit scores of 86, 93 and 95. However, all were rejected. These three applications all ranked within the top 50 that scored highest in the scheme but were rejected for funding. The Australian National Audit Office (ANAO) recently undertook an audit of the $100 million funding that was awarded to 684 projects under the CSIG and found that over half were awarded to applications not deemed meritorious by Sport Australia. As a result, former Sports Minister Bridget McKenzie has been accused of ignoring Sport Australia advice and approving funding in ‘marginal’ or ‘targeted’ seats. Yarra Ranges Council’s environment and infrastructure director Mark Varmalis said projects that were refused funding through the CSIG have still managed to go ahead. “Council applied for Sport Australia funding grants for projects such as the Roma Reserve Playspace Upgrade, Rolling Hills Playspace Upgrade and upgrades at the Yarra Glen Tennis Club and were unsuccessful in securing funding in this round,” he said. “However, we have since progressed these projects using council funding and all three are either completed or near completion.”

Montrose Cricket Club was amongst five projects that received funding under the CSIG. 203868 Picture: ROB CAREW

Funding for the Yarra Glen Tennis Club was refused under the CSIG, however the project has since Picture: ROMY STEPHENS progressed using Council funding. 203992 He added that the council has received “significant amounts of funding from all levels of government” for numerous community projects in recent years. “When planning our projects in the community, council applies for funding through a number of State and Federal Government funding streams,” he said.

“We acknowledge that grant programs are highly competitive and are assessed on different criteria, so we apply and advocate for funding wherever possible.” According to Sport Australia, Yarra Ranges Council had five projects approved under the grants scheme and received $839,000 in funding.

Approved applications included Healesville Tennis Club ($39,000), Montrose Tennis Club ($50,000), Montrose Cricket Club ($50,000) and two for Yarra Ranges Shire Council (total $550,000). Meanwhile, the neighbouring Cardinia Shire had seven projects approved and received funding of almost $1.3 million. Casey MP Tony Smith said funding from the CSIG has benefitted clubs in the region while over $4.7 million was secured last year for sports facilities in the Yarra Ranges, through other Federal Government programs. “Federal Government funding through the Community Sports Infrastructure Program is benefiting sporting clubs in the Casey electorate,” he said. “In 2019, I was pleased to secure significant funding for our local community via other Federal Government programmes. “Each project is focused on improving sporting facilities given increasing female participation and to provide first-class community facilities.” Prime Minister Scott Morrison has asked his department to investigate if Bridget McKenzie has breached ministerial standards in her handling of the sports grants program.

“WHY BUY WHEN YOU CAN HIRE” •฀Trailers฀•฀Scaffolding฀•฀Scissor฀lift฀•฀Temporary฀fencing฀and฀much฀more.