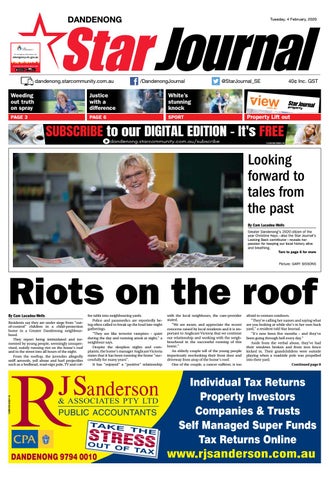 Weeding out truth on spray

Justice with a difference

Looking forward to tales from the past By Cam Lucadou-Wells Greater Dandenong's 2020 citizen of the year Christine Keys - also the Star Journal's Looking Back contributor - reveals her passion for keeping our local history alive and breathing. Turn to page 6 for more Picture: GARY SISSONS

Riots on the roof By Cam Lucadou-Wells

Residents say they are under siege from "outof-control" children in a child-protection home in a Greater Dandenong neighbourhood. They report being intimidated and tormented by young people, seemingly unsupervised, noisily running riot on the home's roof and in the street into all hours of the night. From the rooftop, the juveniles allegedly sniff aerosols, yell abuse and hurl projectiles such as a bedhead, road-sign pole, TV and cof-

fee table into neighbouring yards. Police and paramedics are reportedly being often called to break up the loud late-night gatherings. "They are like terrorist vampires - quiet during the day and running amok at night," a neighbour says. Despite the sleepless nights and complaints, the home's manager Anglicare Victoria states that it has been running the home "successfully for many years". It has "enjoyed" a "positive" relationship

with the local neighbours, the care-provider stated. "We are aware, and appreciate the recent concerns raised by local residents and it is important to Anglicare Victoria that we continue our relationship and working with the neighbourhood in the successful running of this home." An elderly couple tell of the young people imperiously overlooking their front door and driveway from atop of the home's roof. One of the couple, a cancer sufferer, is too

afraid to venture outdoors. "They're calling her names and saying what are you looking at while she's in her own back yard," a resident told Star Journal. "It's now been five months - and they've been going through hell every day." Aside from the verbal abuse, they've had their windows broken and front iron fence kicked in. Their grandchildren were outside playing when a roadside pole was propelled into their yard. Continued page 8