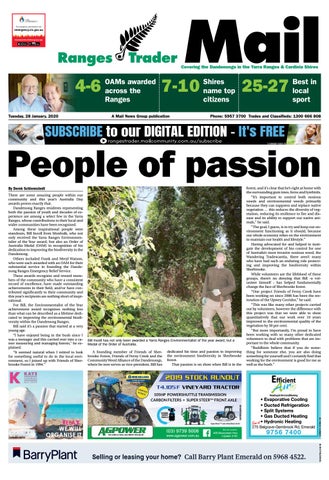 OAMs awarded across the Ranges

A founding member of Friends of Sherbrooke Forest, Friends of Ferny Creek and the Community Weed Alliance of the Dandenongs, where he now serves as vice-president, Bill has

dedicated his time and passion to improving the environment biodiversity in Sherbrooke forest. That passion is on show when Bill is in the

RELAX. WE WILL ORGANISE IT

Bill Incoll has not only been awarded a Yarra Ranges Environmentalist of the year award, but a Medal of the Order of Australia.

There are some amazing people within our community and this year’s Australia Day awards proves exactly that. Dandenong Ranges residents representing both the passion of youth and decades of experience are among a select few in the Yarra Ranges, whose contributions to their local and wider communities have been recognised. Among these inspirational people were standouts, Bill Incoll from Monbulk, who not only received the Yarra Ranges Environmentalist of the Year award, but also an Order of Australia Medal (OAM) in recognition of his dedication to improving the biodiversity in the Dandenong. Others included Frank and Meryl Watson, who were each awarded with an OAM for their substantial service in founding the Dandenong Ranges Emergency Relief Service. These awards recognise and reward members of the community who have a consistent record of excellence, have made outstanding achievements in their field, and/or have contributed significantly to their community and this year’s recipients are nothing short of inspirational. For Bill, the Environmentalist of the Year achievement award recognises nothing less than what can be described as a lifetime dedicated to improving the environmental biodiversity within the Dandenong Ranges. Bill said it’s a passion that started at a very young age. “I have enjoyed being in the bush since I was a teenager and this carried over into a career measuring and managing forests,” he explained. “It seemed natural when I retired to look for something useful to do in the local environment, so I joined up with Friends of Sherbrooke Forest in 1994.”

forest, and it’s clear that he’s right at home with the surrounding gum trees, ferns and lyrebirds. “It’s important to control both noxious weeds and environmental weeds primarily because they can suppress and replace native vegetation ... this reduces the diversity of vegetation, reducing its resilience to fire and disease and its ability to support our native animals," he said. “The goal, I guess, is to try and keep our environment functioning as it should, because our whole economy relies on the environment to maintain our health and lifestyle.” Having advocated for and helped to instigate the development of bio control for one of Australia’s most invasive noxious weed, the Wandering Tradescantia, there aren’t many who have had such an enduring role protecting and improving the biodiversity within Sherbrooke. While volunteers are the lifeblood of these groups, there’s no denying that Bill -a volunteer himself - has helped fundamentally change the face of Sherbrooke forest. “One project Friends of Ferny Creek have been working on since 2006 has been the restoration of the Upwey Corridor,” he said. “This was like many other projects carried out by volunteers, however the difference with this project was that we were able to show quantitatively that our work over 10 years improved to the environmental quality of the vegetation by 30 per cent. "But more importantly, I’m proud to have been working with so many other dedicated volunteers to deal with problems that are important to the whole community. “Buddhists believe that if you do something for someone else, you are also doing something for yourself and I certainly find that working for the environment is good for me as well as the bush.”