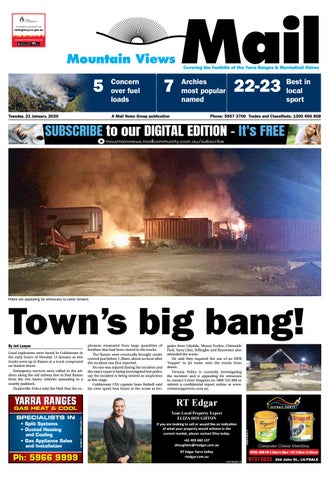 Police are appealing for witnesses to come forward.

Town’s big bang! By Jed Lanyon Loud explosions were heard in Coldstream in the early hours of Monday 13 January as two trucks went up in flames at a truck compound on Station Street. Emergency services were called to the address along the old railway line to find flames from the two heavy vehicles spreading to a nearby paddock. Healesville Police told the Mail that the ex-

If you are looking to sell or would like an indicaion of what your property would achieve in the current market, please contact Eliza today. +61 403 660 137 ehoughton@rtedgar.com.au RT Edgar Yarra Valley rtedgar.com.au

gades from Lilydale, Mount Evelyn, Chirnside Park, Yarra Glen, Yellingbo and Bayswater also attended the scene. He said they required the use of an MFB ‘hopper’ to jet water onto the trucks from above. Victoria Police is currently investigating the incident and is appealing for witnesses to contact Crime Stoppers on 1800 333 000 or submit a confidential report online at www. crimestoppersvic.com.au.

plosions emanated from large quantities of fertiliser that had been stored in the trucks. The flames were eventually brought under control just before 1.30am, about an hour after the incident was first reported. No one was injured during the incident and the exact cause is being investigated but police say the incident is being treated as suspicious at this stage. Coldstream CFA captain Sean Bethell said his crew spent four hours at the scene as bri-