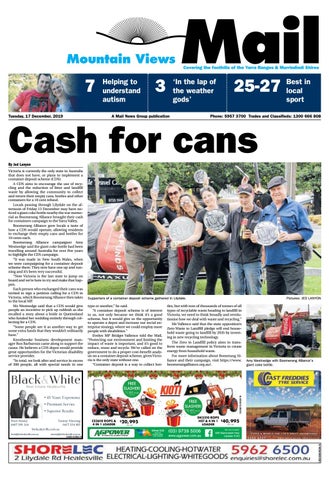 ‘In the lap of the weather gods’

Cash for cans By Jed Lanyon

Supporters of a container deposit scheme gathered in Lilydale. type or another,” he said. “A container deposit scheme is of interest to us, not only because we think it’s a good scheme, but it would give us the opportunity to operate a depot and increase our social enterprise strategy, where we could employ more people with disabilities.” Evelyn MP Bridget Vallence told the Mail, “Protecting our environment and limiting the impact of waste is important, and it’s good to reduce, reuse and recycle. We’ve called on the government to do a proper cost-benefit analysis on a container deposit scheme, given Victoria is the only state without one. “Container deposit is a way to collect bot-

tles, but with tens of thousands of tonnes of all types of recyclable waste heading to landfill in Victoria, we need to think broadly and revolutionise how we deal with waste and recycling.” Ms Vallence said that the state opposition’s Zero Waste to Landfill pledge will end household waste going to landfill by 2035 by investing in new recycling technology. The Zero to Landfill policy aims to transform waste management in Victoria to create energy from household waste. For more information about Bomerang Alliance and their campaign, visit https://www. boomerangalliance.org.au/.

Victoria is currently the only state in Australia that does not have, or plans to implement a container deposit scheme (CDS). A CDS aims to encourage the use of recycling and the reduction of litter and landfill waste by allowing the community to collect and return their empty cans, bottles and other containers for a 10 cent refund. Locals passing through Lilydale on the afternoon of Friday 13 December may have noticed a giant coke bottle nearby the war memorial as Boomerang Alliance brought their cash for containers campaign to the Yarra Valley. Boomerang Alliance gave locals a taste of how a CDS would operate, allowing residents to exchange their empty cans and bottles for 10 cents each. Boomerang Alliance campaigner Amy Westnedge said the giant coke bottle had been travelling around Australia for over five years to highlight the CDS campaign. “It was made in New South Wales, when we were campaigning for a container deposit scheme there. They now have one up and running and it’s been very successful. “Now Victoria is the last state to jump on board and we’re here to try and make that happen. Each person who exchanged their cans was invited to sign a petition calling for a CDS in Victoria, which Boomerang Alliance then takes to the local MP. Ms Westnedge said that a CDS would give people an incentive to pick up rubbish as she recalled a story about a bride in Queensland who funded her wedding entirely through collecting for a CDS. “Some people see it as another way to get some extra funds that they wouldn’t ordinarily have.” Knoxbrooke business development manager Ron Barbaroux came along to support the cause. He believes a CDS depot would provide great opportunities for the Victorian disability service provider. “In total, we look after and service in excess of 300 people, all with special needs in one