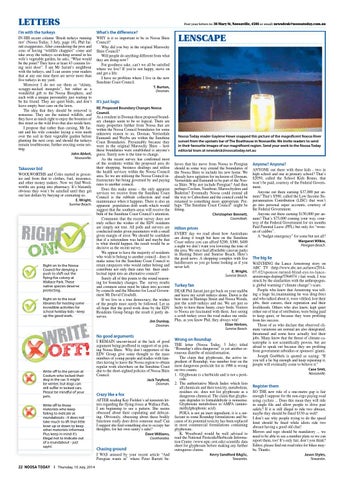 Post your letters to: 36 Mary St, Noosaville, 4566 or email: newsdesk@noosatoday.com.au

I’m with the turkeys

IN HIS recent column ‘Brush turkeys running riot’ (Noosa Today, 3 July, page 18), Phil Jarratt exaggerates. After considering the pros and cons of having “wildlife chappies” come and take away the turkeys scratching around in his wife’s vegetable garden, he asks, “What would be the point? They have at least 43 cousins living next door”. I am Mr Jarratt’s neighbour with the turkeys, and I can assure your readers that at any one time there are never more than five turkeys in my yard. Moreover I do not see them as “skinny, scraggy-necked mongrels”, but rather as a wonderful gift to the Noosa Biosphere, and each with a unique personality just waiting to be his friend. They are quiet birds, and don’t leave empty beer cans on the lawn. The idea that they should be removed is nonsense. They are the natural wildlife, and they have as much right to enjoy the bounties of this street as the wild lives that also reside here. I propose that rather than cursing, Mr Jarratt and his wife consider laying a wire mesh over the soil in their vegetable garden before planting the next crop, and should the turkeys remain troublesome, further erecting some netting. John Abbot, Noosaville.

WHY is it so important to be in Noosa Shire Council? Why did you buy in the original Maroochy Shire Council? Will people do anything different from what they are doing now? For goodness sake, can’t we all be satisfied where we live? If you’re not happy, move on and get a life. I have no problem where I live in the now Sunshine Coast Council. T. Burton, Doonan.

Takeover bid WOOLWORTHS and Coles started in groceries and from that to clothes, fuel, insurance, and other money makers. Now we find Woolworths are going into pharmacy. It’s blatantly obvious they won’t be satisfied until they get our last dollars by burying or cremating us. E. Wright, Sunrise Beach.

Right on to the Noosa Council for denying a push to shift out the flying-fox colony at Wallace Park. These native species deserve protecting. Right on to the local libraries for hosting some incredible activities for school holiday kids - keep up the good work.

It’s just logic RE: Proposed Boundary Changes Noosa Council. As a resident in Doonan these proposed boundary changes seem to be so logical. There are many properties further from Noosa that are within the Noosa Council boundaries for some unknown reason to us, Doonan, Verrierdale Eumundi and Weyba are within the Sunshine Coast Boundaries. Presumably because they were in the original Maroochy Shire – how these boundaries were established is anyone’s guess. Surely now is the time to change. As the recent survey has confirmed most of the residents within the proposed area do their shopping, business dealings and utilise the health services within the Noosa Council area. So we are utilising the Noosa Council infrastructure but being governed by and paying rates to another council. Does this make sense – the only apparent services we receive from the Sunshine Coast Council is the rubbish collection and road maintenance when it happens. There is also an apparent population drift south which would suggest that the southern areas will receive the bulk of the Sunshine Coast Council’s attention. Comments that the recent survey does not truly reflect the wishes of the EDV residents are simply not true. All polls and surveys are conducted under given parameters with a small given margin of error. We should be confident that if a referendum was held and maybe that is what should happen, the result would be as decisive as the recent survey. We appear to have the majority of residents who wish to belong to another council - does it make sense for the Sunshine Coast Council to retain ratepayers who would rather belong and contribute not only their rates but their intellectual input into an alternative council? Surely all of this points to the sound reasoning for boundary changes. The survey results and common sense must be taken into account by councils and the Minister for Local Government Mr David Crisafulli. If we live in a true democracy, the wishes of the people must surely be followed. Let us all hope that the good work done by the EDV Residents Group brings the result it justly deserves. Jim Dunlop, Doonan.

Write off to the person at Coolum who locked their dog in the car. It might be winter, but dogs can still suffer in locked cars. Please be mindful of your pets. Write off to those motorists who keep failing to indicate at roundabouts - it does not take much to lift that little lever up or down to keep other motorists informed. Plus keep in mind it’s illegal not to indicate out of a roundabout - just sayin’.

I REMAIN unconvinced at the lack of good argument being proffered in support of us joining Noosa Shire. Why don’t supporters of the EDV Group give some thought to the mass numbers of young people and tradies with families having to leave the Noosa region to obtain regular work elsewhere on the Sunshine Coast due to the short-sighted policies of Noosa Shire Council. Jack Twyford, Doonan.

Crazy like a fox AFTER reading Kay Fielden’s ad nauseum letters regarding the flying-foxes at Wallace Park, I am beginning to see a pattern. She seems obsessed about their copulating and defecating. Obviously, obsessing about these bodily functions really does drive someone mad! Can I suggest she find something else to occupy her thoughts, for her own sanity’s sake? Dave Williams, Cootharaba.

Noosa Today reader Gaylene Howe snapped this picture of the magnificent Noosa River sunset from the upstairs bar of The Boathouse in Noosaville. We invite readers to send in their favourite images of our magnificent region. Send your work to the Noosa Today editorial team at newsdesk@noosatoday.net.au

lieves that his move from Noosa to Peregian should in some way extend the boundaries of the Noosa Shire to include his new home. We already have agitation for inclusion of Doonan, Verrierdale and Eumundi to be part of the Noosa Shire. Why not include Peregian? And then perhaps Coolum, Nambour, Maroochydore and Buderim? Eventually Noosa could extend all the way to Caboolture and the council could be renamed to something more appropriate. Perhaps “The Sunshine Coast Council” might be fitting. Christopher Bennett, Cooroibah.

Hilton prices EVERY day we read about how Australians are doing it tough but here on the Sunshine Coast unless you can afford $200, $300, $400 a night we don’t want you lowering the tone of the area. We once had affordable caravan parks in Hasting Street and Sunrise Beach. Here’s the good news. A shopping complex with five hairdressers so you go home looking as if you never left. E. Wright, Sunrise Beach.

Turkey fan DEAR Phil Jarratt just get back on your malibu and leave my scrub turkeys alone. Dawn is the best time in Hastings Street and Noosa Woods, just the scrub turkeys and me. We are just so lucky to have these funny, crazy birds. Visitors to Noosa are fascinated with them. Just seeing a scrub turkey cross the road makes me smile. Plus, as you know Phil, they always win! Eilan Nielsen, Sunrise Beach.

Wrong on Roundup THE letter (Noosa Today, 3 July) titled “Roundup’s ultra-dangerous” is yet another erroneous diatribe of misinformation. The claim that glyphosate, the active ingredient of Roundup, was number four on the most dangerous pesticide list in 1986 is wrong on two counts. 1. Glyphosate is a herbicide and is not a pesticide. 2. The authoritative Merck Index which lists all chemicals and their toxicity, metabolism, residues etc. does not list glyphosate as a dangerous chemical. The claim that glyphosate degrades to formaldehyde is nonsense. Glyphosate metabolises to AMPA (aminomethylphophonic acid). POEA is not an inert ingredient, it is a surfactant in some Roundup formulations and because of its potential toxicity has been replaced in most commercial formulations containing glyphosate. K. Woodward would be well advised to read the National Pesticide/Herbicide Information Centre (www.npic.orst.edu) scientific data sheet for glyphosate before making any further outrageous claims. Kerry Sandford BAgSc, Tewantin.

The big lie WATCHING the Lance Armstrong story on ABC TV (http://www.abc.net.au/news/201407-02/sponsor-turned-blind-eye-to-lancearmstrongs-doping/5564074 ) last week, I was struck by the similarities with the anthropogenic global warming (“climate change”) scare. People who knew that Armstrong was telling a huge lie,(maintaining he was drug-free) and who talked about it, were vilified, lost their jobs, their careers, their reputation and their livelihoods. Others who also knew, kept quiet either out of fear of retribution, were being paid to keep quiet, or because they were profiting from his success. Those of us who declare that observed climate variations are normal are also denigrated, threatened and some have actually lost their jobs. Many know that the threat of climate catastrophe is not scientifically proven, but are afraid to speak out because they are profiting from government subsidies or sponsors’ grants. Joseph Goebbels is quoted as saying: “If you tell a lie big enough and keep repeating it, people will eventually come to believe it.” Case Smit, Noosaville.

Register them SO THE new rule of a one-metre gap is fair enough I suppose for the non-rego paying road using cyclists ... Does this mean they will ride in single file and allow people to drive past safely? If it is still illegal to ride two abreast, maybe they should be fined $330 as well! I don’t see why people trying to do the speed limit should be fined while idiots ride two abreast having a good old chat! Mirrors and rego should be mandatory ... we need to be able to see a number plate so we can report them, too! It’s only fair, don’t you think? Editor, please find out road rules for bikes maybe. Thanks. Jason Styles, Tewantin.