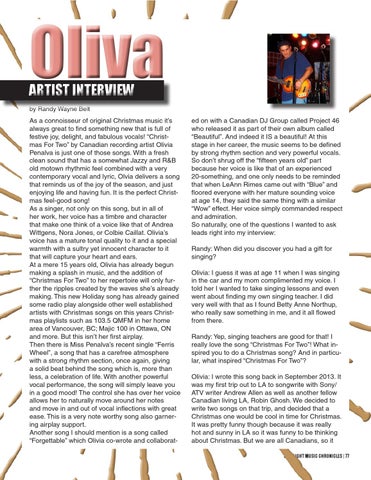 As a connoisseur of original Christmas music it’s always great to find something new that is full of festive joy, delight, and fabulous vocals! “Christmas For Two” by Canadian recording artist Olivia Penalva is just one of those songs. With a fresh clean sound that has a somewhat Jazzy and R&amp;B old motown rhythmic feel combined with a very contemporary vocal and lyric, Olvia delivers a song that reminds us of the joy of the season, and just enjoying life and having fun. It is the perfect Christmas feel-good song! As a singer, not only on this song, but in all of her work, her voice has a timbre and character that make one think of a voice like that of Andrea Wittgens, Nora Jones, or Colbie Caillat. Olivia’s voice has a mature tonal quality to it and a special warmth with a sultry yet innocent character to it that will capture your heart and ears. At a mere 15 years old, Olivia has already begun making a splash in music, and the addition of “Christmas For Two” to her repertoire will only further the ripples created by the waves she’s already making. This new Holiday song has already gained some radio play alongside other well established artists with Christmas songs on this years Christmas playlists such as 103.5 QMFM in her home area of Vancouver, BC; Majic 100 in Ottawa, ON and more. But this isn’t her first airplay. Then there is Miss Penalva’s recent single “Ferris Wheel”, a song that has a carefree atmosphere with a strong rhythm section, once again, giving a solid beat behind the song which is, more than less, a celebration of life. With another powerful vocal performance, the song will simply leave you in a good mood! The control she has over her voice allows her to naturally move around her notes and move in and out of vocal inflections with great ease. This is a very note worthy song also garnering airplay support. Another song I should mention is a song called “Forgettable” which Olivia co-wrote and collaborat-

ed on with a Canadian DJ Group called Project 46 who released it as part of their own album called “Beautiful”. And indeed it IS a beautiful! At this stage in her career, the music seems to be defined by strong rhythm section and very powerful vocals. So don’t shrug off the “fifteen years old” part because her voice is like that of an experienced 20-something, and one only needs to be reminded that when LeAnn Rimes came out with “Blue” and floored everyone with her mature sounding voice at age 14, they said the same thing with a similar “Wow” effect. Her voice simply commanded respect and admiration. So naturally, one of the questions I wanted to ask leads right into my interview: Randy: When did you discover you had a gift for singing? Olivia: I guess it was at age 11 when I was singing in the car and my mom complimented my voice. I told her I wanted to take singing lessons and even went about finding my own singing teacher. I did very well with that as I found Betty Anne Northup, who really saw something in me, and it all flowed from there. Randy: Yep, singing teachers are good for that! I really love the song “Christmas For Two”! What inspired you to do a Christmas song? And in particular, what inspired “Christmas For Two”? Olivia: I wrote this song back in September 2013. It was my first trip out to LA to songwrite with Sony/ ATV writer Andrew Allen as well as another fellow Canadian living LA, Robin Ghosh. We decided to write two songs on that trip, and decided that a Christmas one would be cool in time for Christmas. It was pretty funny though because it was really hot and sunny in LA so it was funny to be thinking about Christmas. But we are all Canadians, so it STARLIGHT MUSIC CHRONICLES | 77 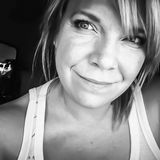