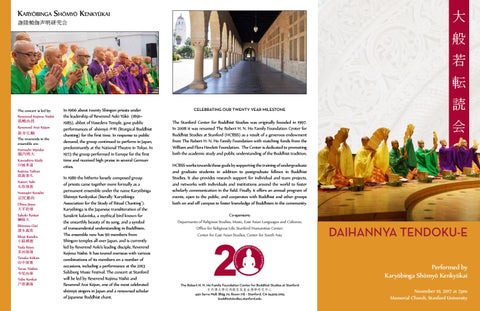 In 1966 about twenty Shingon priests under the leadership of Reverend Aoki Yūkō (1891– 1985), abbot of Hasedera Temple, gave public performances of shōmyō 声明 (liturgical Buddhist chanting) for the first time. In response to public demand, the group continued to perform in Japan, predominantly at the National Theatre in Tokyo. In 1973 the group performed in Europe for the first time and received high praise in several German cities. In 1980 the hitherto loosely composed group of priests came together more formally as a permanent ensemble under the name Karyōbinga Shōmyō Kenkyūkai (literally ‘Karyōbinga Association for the Study of Ritual Chanting’). Karyōbinga is the Japanese transliteration of the Sanskrit kalavinka, a mythical bird known for the unearthly beauty of its song, and a symbol of transcendental understanding in Buddhism. The ensemble now has 90 members from Shingon temples all over Japan, and is currently led by Reverend Aoki’s leading disciple, Reverend Kojima Yūshō. It has toured overseas with various combinations of its members on a number of occasions, including a performance at the 2013 Salzburg Music Festival. The concert at Stanford will be led by Reverend Kojima Yūshō and Reverend Arai Kōjun, one of the most celebrated shōmyō singers in Japan and a renowned scholar of Japanese Buddhist chant.

The Stanford Center for Buddhist Studies was originally founded in 1997. In 2008 it was renamed The Robert H. N. Ho Family Foundation Center for Buddhist Studies at Stanford (HCBSS) as a result of a generous endowment from The Robert H. N. Ho Family Foundation with matching funds from the William and Flora Hewlett Foundation. The Center is dedicated to promoting both the academic study and public understanding of the Buddhist tradition.

HCBSS works towards these goals by supporting the training of undergraduate and graduate students in addition to postgraduate fellows in Buddhist Studies. It also provides research support for individual and team projects, and networks with individuals and institutions around the world to foster scholarly communication in the field. Finally, it offers an annual program of events, open to the public, and cooperates with Buddhist and other groups both on and off campus to foster knowledge of Buddhism in the community. Co-sponsors: Deparments of Religious Studies, Music, East Asian Languages and Cultures; Office for Religious Life; Stanford Humanities Center; Center for East Asian Studies, Center for South Asia

shōmyō pieces Praise of the Buddha (Nyoraibai 如來唄), Scattering Flowers (Sange 散華), Sanskrit Sounds (Bonnon 梵音), and Priest Staff (Shakujō 錫杖). In all religions, music plays a vital role in communication with the sacred. Priests sing hymns asking divinities for protection; shamans play drums and in a state of trance communicate with spirits; or devotees intone sacred words praying for the favorable rebirth of the deceased. In Buddhism too, music and sound are key components of various practices and rituals, ranging from the singing of sacred texts with elaborate melodies to the recitation of sutras on a single tone to the sound of musical instruments that reverberate through the monastery compound and guide clerics through their daily schedule.

In the ninth century two new schools featuring esoteric Buddhist practices were introduced to Japan: Shingon and Tendai. Kūkai 空海 (774–835), the founder of the Shingon school, is supposed to have transmitted the pieces of the core repertoire of Shingon shōmyō from China, while Ennin 圓仁 (794–864), a disciple of the Tendai founder Saichō 最澄 (767–822), is said to have transmitted many important shōmyō pieces from China and thus laid the foundation of Tendai shōmyō. Around the tenth century, Japanese monks started to develop liturgical genres in Japanese, and as a result chants in the vernacular language were added to the shōmyō repertoire, which so far had consisted only of pieces in Sanskrit and Chinese. Early on, monks developed musical notation systems, called hakase 博 士, in order to transmit and preserve the melodies of the liturgical pieces. The oldest extant examples of Buddhist musical notation in Japan date from the tenth century. Remarkably, the oldest printed musical notation in the world is a shōmyō notation printed at Mt. Kōya in 1472. In contemporary Japan, monks and nuns still eagerly learn how to sing sacred texts in the traditional style and continue to perform traditional Buddhist rites regularly. Renowned priest ensembles also perform shōmyō on concert stages all around the world and in this way introduce the religious music of Japanese Buddhism to new audiences.

In Japanese Buddhism, the vocal music used in rituals is called shōmyō 声明, literally “bright voice.” Shōmyō is unaccompanied vocal music sung exclusively by clerics. Musical instruments, such as small bells, sounding bowls, gongs, and cymbals, are only occasionally played to signal the beginning or end of ritual sequences. This kind of chant came to Japan when Buddhism was brought to the country, initially from Korea in the sixth century and later from China. Already in the eighth century the major Buddhist temples in Nara, then the capital of Japan, had their own music departments. Probably the earliest extant record of a shōmyō performance is the description of the eye-opening ceremony of the Mahāvairocana Buddha at Tōdaiji in Nara in 752, where more than one thousand monks are said to have sung the

Today Kashōken, an internationally renowned ensemble of Japanese Shingon priests, will perform a Daihannya Tendoku 大般若転読, a “rolling reading” of the Great Sutra on the Perfection of Wisdom (Mahāprajñāpāramitā sūtra) at the Memorial Church of Stanford University. The Daihannya Tendoku is one of the most important rituals of Japanese Buddhism. It features the Great Sutra on the Perfection of Wisdom, one of the central texts of Mahāyāna Buddhism, and with 600 fascicles also the longest text in the Buddhist canon. Since the early eighth century, rituals centered on a reading of this sutra have been performed in Japan. In early times, several hundred clerics gathered for several days to read the sutra character by character. However, this was often impractical, or even impossible, as not enough clerics were present to recite the entire text. For this reason, clerics sought to find ways to abbreviate the ritual. When sutra books in concertina format were introduced, clerics started to just skim through the text by having the pages of the book quickly glide from one hand to

the other, while loudly exclaiming the titles of the sutra and its volumes, as well as a few lines of the sutra itself. This way of reading, called “rolling reading,” resulted in the dramatic visual effect of accordion-like sutra pages cascading through the air. Paired with the sound of loud voices intoning the titles of the sutra and its volumes, the ritual creates what the priests call a “wind of wisdom.” In today’s concert, Kashōken invites you on a journey to the sounding world of Japanese esoteric Buddhism, to feel the breath of the “wind of wisdom” yourself.