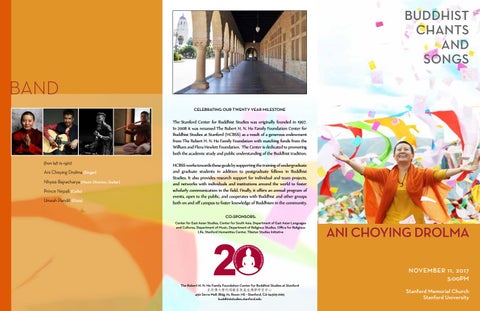 The Stanford Center for Buddhist Studies was originally founded in 1997. In 2008 it was renamed The Robert H. N. Ho Family Foundation Center for Buddhist Studies at Stanford (HCBSS) as a result of a generous endowment from The Robert H. N. Ho Family Foundation with matching funds from the William and Flora Hewlett Foundation. The Center is dedicated to promoting both the academic study and public understanding of the Buddhist tradition. (from left to right)

HCBSS works towards these goals by supporting the training of undergraduate and graduate students in addition to postgraduate fellows in Buddhist Studies. It also provides research support for individual and team projects, and networks with individuals and institutions around the world to foster scholarly communication in the field. Finally, it offers an annual program of events, open to the public, and cooperates with Buddhist and other groups both on and off campus to foster knowledge of Buddhism in the community. CO-SPONSORS: Center for East Asian Studies, Center for South Asia, Department of East Asian Languages and Cultures, Department of Music, Department of Religious Studies, Office for Religious Life, Stanford Humanities Center, Tibetan Studies Initiative

ABOUT ANI CHOYING DROLMA Choying Drolma was born in Kathmandu, Nepal to Tibetan refugee parents in 1971. From the age of 5, she did not have a day went by without beating to her mother and herself by her father. Seeing lots of suffering and pain in life, in order to get rid of the tragic destiny of a women in male dominated society which she saw vividly in her own family and community, the 13 years old Ani Choying Drolma decided to leave home to join a Tibetan Buddhist nunnery named Nagi Gompa on Shivapuri Mountain in the northern slope of the Kathmandu Valley. The fate of her life, since then, was rewrote. Her education and spiritual training were supervised by the renowned meditation master, Tulku Urgyen Rinpoche. She was well-trained in Buddhist meditation, chants, rituals and ceremonies performance, and was quickly advanced to the position of chanting master in the nunnery. Overwhelmed by the guidance, caring and love from her teacher Tulku Urgyen Rinpoche, Ani Choying Drolma was not only able to change the perspective of life by seeig the suffering of her own father and many others, she also transform anger and frustration life as compassion. Ani Choying Drolma served Tulku Urgen Rinpoche until his parinirvana (passing away) in February 1996. From the experience of Tulku Urgyen Rinpoche’s altruistic life-style, his willingness to always giving to others without considering his own welfare, and his respect to nuns in the same regard as monks, she has developed a sincere desire to contribute whatever capacities she has to benefit sentient beings as much as possible and to promote the advancement of nuns. Ani Choying Drolma believes that creating more opportunities for nuns to study and to develop their own capacities for skilful and compassionate action is the best way she can dedicate herself to her teacher’s vision throughout her life. Her singing talent was first discovered by the famous American guitarist Steve Tibbetts, during his visit to Nagi Gompa. Even though she has never received any formal musical or vocal training, she loves to sing since childhood. When she sings, her voice sounds like an echo from the deepest part of a soul. Thanks to Steve Tibbett’s effort, Ani Choying Drolma’s first ever album “Cho” was launched in 1997. Since then, she has became a wellknown name in international world music scene. She toured in America and Europe and successfully presented Buddhist mantra and ritual chanting music to the world. Up to date, she has launched 16 albums, and performed for hundreds of events around world. It is said that Ani Choying Drolma’s music is like a beam of light that cut through the darkness and is filled with compassion and purity. Her voice is also named as “the heavenly voice” with healing power.

Ani Choying Drolma is more than a world renowned singing nun. She is also an awarded humanitarian. In 2014, she is appointed as the first UNICEF National Goodwill Ambassador for Nepal. She described the singing ability as her magic wand that manifests numerous successful projects to promote education, health, children’s right and women empowerment. She founded Arya Tara School in 2000 to provide education opportunities to young girls in Nepal. Now, more then 150 children have been benefited. In 2010, she started Aarogya Foundation & Kidney Hospital to provide high-quality yet low-cost dialysis services, and has established the first HLA lab in Nepal which allows kidney patient to get accurate test result in the very next day. Aarogya Foundation has achieved the goal in improving medical facilities in Nepal and has successfully persuaded the legalization of 3rd party organ donation by government through lobbying. On 2013, in order to provide assistance to single mothers who have difficulties working, she started Arya Tara Pre-school (ATPS) to take care child of the single mothers during day time. ATPS is now operated by NWF nuns and well-trained Montessori teachers. After the devastating earthquake that hit Nepal badly in 2015, Ani Choying Drolma has rebuilt school and facilities in remote area. Also, she has started the Stars of Hope Schooling Programme (SOH) to reach out to earthquake orphans or children who are in extreme poverty, for providing them full boarding education sponsorship. 125 kids are being sponsored by this program so far. All the project initiated by Ani Choying Drolma are financially supported by the proceeds from her concerts, CD sales and donation from supporters Concert by Ani Choying Drolma and the band on NOVEMBER 11, 2017 at 5:00PM STANFORD MEMORIAL CHURCH for tickets: http://sto.stanfordtickets...

Concert by Ani Choying Drolma and the band on NOVEMBER 11, 2017 at 5:00PM STANFORD MEMORIAL CHURCH for tickets: http://sto.stanfordtickets...