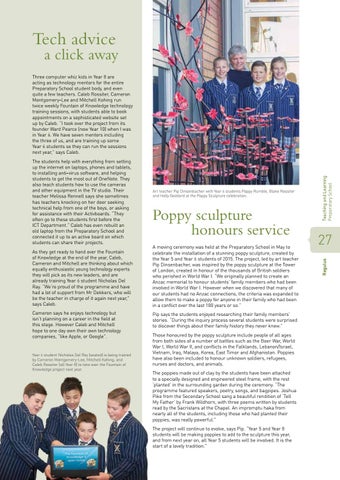 As they get ready to hand over the Fountain of Knowledge at the end of the year, Caleb, Cameron and Mitchell are thinking about which equally enthusiastic young technology experts they will pick as its new leaders, and are already training Year 6 student Nicholas Del Ray. “We’re proud of the programme and have had a lot of support from Mr Dekkers, who will be the teacher in charge of it again next year,” says Caleb. Cameron says he enjoys technology but isn’t planning on a career in the field at this stage. However Caleb and Mitchell hope to one day own their own technology companies, “like Apple, or Google”.

Year 6 student Nicholas Del Rey (seated) is being trained by Cameron Montgomery-Lee, Mitchell Kohing, and Caleb Rossiter (all Year 8) to take over the Fountain of Knowledge project next year.

Poppy sculpture honours service A moving ceremony was held at the Preparatory School in May to celebrate the installation of a stunning poppy sculpture, created by the Year 5 and Year 6 students of 2015. The project, led by art teacher Pip Dinsenbacher, was inspired by the poppy sculpture at the Tower of London, created in honour of the thousands of British soldiers who perished in World War I. “We originally planned to create an Anzac memorial to honour students’ family members who had been involved in World War I. However when we discovered that many of our students had no Anzac connections, the criteria was expanded to allow them to make a poppy for anyone in their family who had been in a conflict over the last 100 years or so.” Pip says the students enjoyed researching their family members’ stories. “During the inquiry process several students were surprised to discover things about their family history they never knew.” Those honoured by the poppy sculpture include people of all ages from both sides of a number of battles such as the Boer War, World War I, World War II, and conflicts in the Falklands, Lebanon/Israel, Vietnam, Iraq, Malaya, Korea, East Timor and Afghanistan. Poppies have also been included to honour unknown soldiers, refugees, nurses and doctors, and animals. The poppies made out of clay by the students have been attached to a specially designed and engineered steel frame, with the rest ‘planted’ in the surrounding garden during the ceremony. “The programme featured speakers, poetry, songs, and bagpipes. Joshua Pike from the Secondary School sang a beautiful rendition of ‘Tell My Father’ by Frank Wildhorn, with three poems written by students read by the Sacristans at the Chapel. An impromptu haka from nearly all of the students, including those who had planted their poppies, was really powerful.” The project will continue to evolve, says Pip. “Year 5 and Year 8 students will be making poppies to add to the sculpture this year, and from next year on, all Year 5 students will be involved. It is the start of a lovely tradition.”

The students help with everything from setting up the internet on laptops, phones and tablets, to installing anti-virus software, and helping students to get the most out of OneNote. They also teach students how to use the cameras and other equipment in the TV studio. Their teacher Melissa Rennell says she sometimes has teachers knocking on her door seeking technical help from one of the boys, or asking for assistance with their Activboards. “They often go to these students first before the ICT Department.” Caleb has even rebuilt an old laptop from the Preparatory School and connected it up to an active board on which students can share their projects.

Three computer whiz kids in Year 8 are acting as technology mentors for the entire Preparatory School student body, and even quite a few teachers. Caleb Rossiter, Cameron Montgomery-Lee and Mitchell Kohing run twice weekly Fountain of Knowledge technology training sessions, with students able to book appointments on a sophisticated website set up by Caleb. “I took over the project from its founder Ward Pearce (now Year 10) when I was in Year 6. We have seven mentors including the three of us, and are training up some Year 6 students so they can run the sessions next year,” says Caleb.

Regulus - Issue 2, 2016 Regulus is the St Andrew's College magazine, which is published in May, August and November each year. 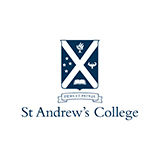