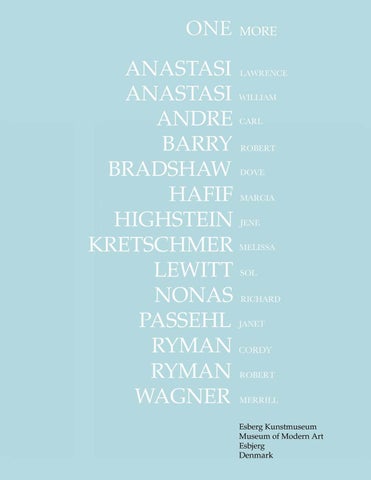 ONE More In 2005 my Danish dealer, Sam Jedig asked me to put together an exhibition of fellow Americans. The artists that came to mind were founders or advocates of Minimal and Conceptual Art — Anastasi, Andre, Barry, Hafif, Highstein, Kretschmer, LeWitt, Nonas, Wagner, and myself. All of us live in New York City and have known each other for decades. In the fall of 2007 I mentioned the group to Björn Ressle, my New York gallerist. He liked the dynamic and asked whether the first venue might be his own gallery. As the concept developed it became ONE — one work made from a single material by each artist executed directly on the walls, floor and windows of the gallery. Selections of the works were made in early 2007, a few months before Sol LeWitt died. Each of us including Björn Ressle had known Sol well and deeply mourned his absence. When the exhibition opened in December of that year it was dedicated to him. I had the great honor of executing Sol’s 1972 work with these instructions, “A not straight line from the left side to the right, drawn at a convenient height.” One reviewer commented that it read like an abstract, posthumous signature.

ONE More evolved from the earlier exhibition, though with the constraint of a single material lifted. Four more artists were added to the original ten: Lawrence Anastasi, Janet Passehl, Cordy Ryman and Robert Ryman. Each artist was asked to contribute two works, selected for meaningful pairings with the overriding intention to incite conversation amongst the whole. The additional group also knew Sol LeWitt well; ONE More is dedicated to him. Dove Bradshaw

Each of the twenty-eight works in ONE More is associated with the expansive aesthetic field opened up by the emergence of Conceptual Art and Minimalism in the 1960s. Both of these movements were critical and imaginative reactions against formalism, which had become in effect a straitjacket, and both were concerned with art as a general concept rather than with a specific medium. Conceptual art, as the critic Lucy Lippard famously argued, often involved a “dematerialization” of the art object, while Minimalism, on the other hand, generally took the form of what Donald Judd called “specific objects”; but as ONE More shows, the two movements were closely connected and in fact often overlapped, most obviously in the seminal work of the late Sol LeWitt, to whom the show is dedicated and whose memory it honors. Rather than rely on general characterizations, ONE More applies delicate nuance and complexity to the exploration of this area where Conceptual art and Minimalism connect. The connection involves an understanding of materials, and of their physical and visual properties, as integral parts of conceptual processes, systems, and objects. Here ONE More points beyond the widespread understanding of the conceptual and the material aspects of art as mutually excluding opposites. Insisting on a more integrated and dynamic relation between the two aspects, the works in the show institute an exchange between the abstractness of ideas and the concrete presence of materials—the conceptual becomes materially manifest and the material demonstrates conceptual qualities. The scope of thinking expands through materials, the material world expands through conceptual Logics – an expansion paradoxically produced with reduced means, as in Minimal art. But paradox is

the point here: by keeping their use of materials simple and clear, the works present materials in a state of potential, of openness. The works in One More concern themselves with neither the rational mastery of the intellectual world nor the beautification of the material world. Instead, they pose exploratory, irrational, enigmatic questions of the material world, questions that lead to new meanings and new experiences, to paraphrase LeWitt’s “Sentences on Conceptual Art” from 1969. They reflect human involvement in a world without any essential, universal qualities in its materials. Instead of understanding the world according to established principles, whether aesthetic, philosophical, or material, these works let it unfold in ways that challenge any notion of finite meaning. The phenomenal world that they address cannot be explained or defined, cannot be taken for granted—can only be experienced, continuously rediscovered, full of subtle surprises, differences, and possibilities.

ONE More then, conforms to no conventional notion of experience, no conventional logic of finitude. Guided by the multidirectional compass of art, the show is based on a fundamental wonder about materials— about what is, and about the fact that it is. This is an art devoid of illusions, whether of the eye or of the mind. Yet it is certainly not an art of disillusion—on the contrary, it understands the relation between the conceptual and the material as a rich, productive aesthetic potential, one far exceeding preexisting structures of meaning and taste. In bypassing those structures, the works put materials into conceptual play, a play of countless poetic and philosophical sensibilities. Jacob Lillemose

What is more important life or art? They are inseparable.

The only interesting thing about taste is that itâ&amp;#x20AC;&amp;#x2122;s changing.

Bradshaw: What were your thoughts regarding centering the hanging cube â&amp;#x20AC;&amp;#x201D; if you recall? Barry: A little earlier I made some square paintings that were hung in the center of the wall. It was about activating the space around and outside the painting. When I found the cube weight in a physics classroom in the school where I was teaching, the jump from the painting on the wall to the cube in the center of the room seemed obvious. The Idea is to use this simple object to create a personal, dynamic space around it. When, where and how an art object is presented is as important for its meaning as the object itself.

Poetry is everywhere evident, all one need do is present materials.

A surface apparently without incident reveals to the artist the impossibility of eliminating it altogether and gives to the viewer the experience of seeming emptiness and the option of dealing with her/himself in that emptiness.

Each new work is a discovery. It may seem that there is a development or progression in the sequence but in fact it feels to me as if each sculpture or drawing is a unique invention different from all the ones before it. Itâ&amp;#x20AC;&amp;#x2122;s the sense of anticipation that drives the process. I am always hoping to be overwhelmed by a sense of discovery.

I have always found great satisfaction in working somewhere between painting and sculpture, in a place where aspects of each are inextricably linked and in tension with one another: flatness and depth; color and matter; transparency, translucency and opacity; light and shadow. I believe the very immanence of any artwork is dependent upon the simultaneity of various qualities and traits within that work. Materials, being the generative force behind my works, provide the means by which I can explore just that. I try to approach the work with a sense of accuracy rather than precision, accuracy being about the rightness of the whole entity rather than the fit of its individual parts. While accuracy does not preclude imperfection, precision does and often at the loss of a sense of the whole.

[I] donâ&amp;#x20AC;&amp;#x2122;t particularly care whether it is beautiful or ugly or neither or bothâ&amp;#x20AC;Śif I give the instructions and they are carried out correctly the result is ok with me.

Sculpture is the acknowledgment of the chaos we know surrounds us; the way we stab impending, impinging, confusion into our immediate life. Not softly as the inexplicable presence of a rock or a river might; not gradually as the unknowable reality of another person&#39;s life might; not smoothly as the utility of an ax or hammer might â&amp;#x20AC;&amp;#x201D;but silently, violently, mysteriously, and surprisingly all at once.

I am moved by plainness. At the base of all my decision-making is the questionâ&amp;#x20AC;&amp;#x201C; how quiet and plain a gesture can I make that will still result in poetry?

My work often has to do with reactions. Either reacting to architectural elements in space, or within more contained pieces reacting to elements already present in the materials. Sometimes a work begins as something else, and gets discarded. Later when rediscovered a new eye will bring a totally new reaction that I could not have had the first time.

I guess you can say that my painting is a kind of experiment… To figure out how it works, the different possibilities that can happen … With my paintings I don’t really plan them, it has to come about visually. I have to see how it’s developing, what can come from it, and then I make the decision whether I like it or not.

[The steel paintings] have just as much to do with materials and geometry as they have to do with landscape. …I was…consciously trying to do work that would integrate the urban environment, which is all straight lines, gray colors, and man-made, with the landscape that I came from. … I remember going up to Mt. Rainier, and as I got closer and higher up, the mountain got even more intimidating and it made me angry. And I thought to myself: “This is really an inappropriate thing. Why am I feeling angry?” Later I realized that I was disturbed because I didn’t like the fact that it was so overwhelming. You can have an apple tree, or some plants, and you can have this and that, but the mountain is another matter. 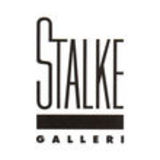