As a Catholic Montessori school, St. Catherineâ&#x20AC;&#x2122;s is dedicated to an educational experience which awakens in our students the awareness of their gifts and responsibilities as individuals in relationship with Jesus Christ and as stewards of the global community.

The overarching thought that surfaces when reflecting on the 2017-2018 school year is the incredible strength and kindness of the St. Catherine’s Montessori community. The devastation of Hurricane Harvey brought families together to help one another with the most basic needs. Children joined parents in an exhibition of love and hospitality for others, and carried that generous spirit into the school year to continue providing for those in need. In spite of, or perhaps because of, the difficult start to the school year, the majority of St. Catherine’s parents participated in the Strategic Planning process to define the direction of the school for the next 5 years. It’s as if the energy expended in helping after the storm put us in a state of “flow” and actually united and revitalized us as a community, giving us the fortitude to plan for the future. The Appreciative Inquiry approach to the planning process helped us recognize what we are grateful for at St. Catherine’s and what we can do to make our school even better. Interestingly enough, while the whole community was planning for the next 5 years, we were simultaneously enjoying the fruits of prior planning with the completion of the campus expansion, opening our high school, and developing an environmental land experience at Japhet Creek. It was a year of reaping and sowing. The compassion and generosity of this community are evidenced in all circumstances and are the greatest gifts we can model for our children. What an inspiring and fulfilling year. In humble gratitude to all in this community. Blessings,

David Marks My term as president of the Board of Directors began at the same time I watched my youngest daughter, the last of three graduates of St. Catherine’s Montessori, graduate from college. I firmly believe that the foundation for that bright, accomplished young woman was developed in her years at St. Catherine’s. It is the unique character of the school that is responsible for establishing the spiritual and educational foundation upon which she has grown, and it is that unique character we must all take responsibility for preserving and expanding. During the 2017-2018 school year, we saw the fruits of the generosity of our families and friends translated into an expansion of the school. We participated, with the help and support of Sterling Associates and the leadership of board member Alison Jefferies, in the updating of the school’s Strategic Plan. Having completed the development and adoption of the plan, we have moved into the implementation stage, wherein we challenge ourselves to realize a vision for the school that we – its parents, students, faculty, staff, and board members – collectively created. With the addition of the Japhet Creek properties and the expanded opportunities that they offer added into the mix of St. Catherine’s resources, we are experiencing a most exciting time for the school. The decisions we make over the next few years will dramatically impact the direction and character of St. Catherine’s over the next fifty years. It has been my honor and pleasure to serve on the school board and to have met and gotten to know so many of the current families. I look forward to working with the school as it continues to grow and develop on its continuing journey. Blessings to all who enter and support St. Catherine’s Montessori.

Throughout the 2017-2018 school year, despite continuing to recover from the impact of Hurricane Harvey to our city, the St. Catherine’s Montessori community remained committed to giving time, resources, and financial gifts in order to meet our school’s goals. This persevering attitude is what has sustained St. Catherine’s over the last half century and will continue to drive us into the future. The financial strength of St. Catherine’s Montessori continues to improve since we attained debt-free status three years ago. Through the very generous community support during our Capital Campaign, we were able to add much needed space and resources for organic growth without acquiring new debt. Construction of two new Upper Elementary classrooms and restoration of The Sister Edna Ann Hebert Library were completed on time and under budget this past summer – an accomplishment for which we can all be proud and inspiration on which we can build. As our financials illustrate year after year, St. Catherine’s Montessori is a fiscally responsible organization where the majority of revenue is directed to where our children will benefit most - the classroom. As we implement the 2018-2023 Strategic Plan, additional projects will be necessary to meet our community’s needs and expand learning opportunities for our children. The Finance Committee and Board of Directors remain committed to looking for opportunities to grow responsibly while maintaining our focus on key initiatives. I am truly honored to serve as treasurer of the Board of Directors at our wonderful school. St. Catherine’s Montessori is a special place and my family is grateful to be part of this loving, generous community. Ryan Patterson Treasurer, Board of Directors Chair, Finance Committee

For over 50 years, St. Catherine's Montessori has provided its students with an exceptional education, founded on the principles established by Maria Montessori and instilled with the Catholic faith. During that time, many families have helped to advance the mission of our school by giving of their time, talent, and treasure. In 2017-2018 our community contributed to the SCM Fund and accepted the opportunity to continue the legacy that began with our foundresses by providing additional financial aid support to make our school accessible to a diverse group of families. To keep us always looking forward with an eye towards improvement, we also engaged in a robust and dynamic strategic planning process in order to set achievable goals. It is the continuing goal of Advancement to work towards securing the necessary resources that ensure the mission carries on, and to help reach the goals outlined in our five-year strategic plan. The St. Catherine’s community achieved many advancement milestones in 2017-2018, which include: •C  oncluding our Capital Campaign, with a final fundraising event, “Under the Stars at Japhet Creek,” and the construction of our two new Upper Elementary classrooms and restoration of The Sister Edna Ann Hebert Library; •R  aising $185,120 for the SCM Fund with 82% of parents participating and 100% board and faculty/staff participation; • Raising $38,100 for tuition assistance at our Great Conversations fundraising event; • Hosting 29 Sociables events, which fostered community spirit and raised $29,561 in support of the school’s operating expenses; and • Developing the 2018-2023 Strategic Plan, which included parent participation in five Appreciative Inquiry Sessions, two all-school sessions, and a parent survey with an 84% current family response rate

“Through the work of Advancement, I have seen firsthand how St. Catherine’s Montessori supports and fosters the development of the whole child —intellectually, physically, socially, morally, and spiritually. Because of your generous support to the SCM Fund, the Capital Campaign and tuition assistance, we are able to continue to meet the needs of our children. Thank you to the SCM community for volunteering, donating, and supporting our community!” Chris Palamountain Secretary, Board of Directors Chair, Advancement Committee

Building on the Legacy S T. C AT H E R I N E ’ S M O N T E S S O R I C A P I TA L C A M PA I G N What a joyful moment it was to witness Sister Edna Ann cut the ribbon and, along with Susan Tracy and Sister Mary Magdalen, bless our new classrooms in front of the very children who will benefit from new environments in the form of shiny, spacious classrooms, as well as a beautifully-appointed library! We sincerely appreciate the generosity of our school community and extended friends and family, and value their participation in our Capital Campaign, “Building on the Legacy,” and the realization of these important projects. As it has done time and time again, the St. Catherine’s Montessori community pulled together to create the best environment possible so that our children and future generations of children may learn, grow, and develop with all that they need to do so successfully. We are grateful, and in awe of the generosity and spirit of this community. Thank you! Kristina Baizan Devereux and Deborah Gremillion Co-Chairs Capital Campaign Committee

We extend our sincerest gratitude to everyone who generously contributed to this campus expansion project in support of St. Catherineâ&#x20AC;&#x2122;s growing needs. L I S T

St. Catherine’s Montessori is blessed by the generosity of the following individuals, families, foundations, and corporations who supported us during the 2017-2018 fiscal year. These donors made SCM Fund gifts between July 1, 2017 and June 30, 2018. Their commitment to our mission allows us to provide the best curriculum, environment, and facilities for the academic, emotional, and spiritual needs of St. Catherine's students. G U A R D I A N S O F L I G H T : $5,000 +

It was an honor and a privilege to serve as PSO President for the 2016-2017 and 2017-2018 school years. The time that our parents invest in this community is evident in every event the PSO organizes. During the 2017-2018 year, the PSO committees accomplished many great things, including: • Rallying together to help our fellow families who suffered losses due to Hurricane Harvey; • Hosting playdates and organizing Parent Potlucks to welcome new families and get to know our fellow classroom parents; • Beautifying the garden and grounds on our main campus and at Japhet Creek to prepare for Spring Fling and the “Japhet Under the Stars” fundraising event, as well as assisting our school naturalist with planting, weeding, and harvesting throughout the year; • Hosting nearly 800 total attendees at PSO Fall Fest and PSO Spring Fling; • Organizing the annual Book Fair and Christmas Concert and Dinner, and assisting the library manager with sorting Primary books and other library needs; • Celebrating the liturgical year, hosting weekly Christian meditation for parents and monthly rosaries, as well as recognizing monthly Saint Dedication with a newsletter and altar in the Welcome Center; • Organizing drives for back-to-school supplies during the summer and for pajamas and basic needs during Christmas - in support of the children of Casa de Esperanza; • Celebrating our faculty and staff members with a Christmas-themed appreciation luncheon; • Screening the film, Screenagers: Growing Up in the Digital Age with special guest presenter Dr. Crystal Collier, who spoke about screen addiction. As a follow-up to the event, the PSO began a series of Tech Talks, during which parents discussed various topics related to this subject, and invited Dr. Collier to return to lead a roundtable discussion; • Choosing four Book Club selections and hosting discussions; • Treating the Guides with decadent baked goods and sweets at the Dessert Soirée, as well as surprising them with snacks and goodies throughout the year Thank you to the volunteers for the love and hard work you put into fulfilling the PSO’s mission to enhance the experience of all St. Catherine’s Montessori students, staff, and parents. Mary Tysor President, Parent Service Organization

This school year was a great success for the student athletic program. The Booster Club replaced all of the existing sport team uniforms, and they look amazing! It was also a year of transition for the Booster Club, as St. Catherine’s included the athletic program in the school’s operating budget, which provided a wonderful boost of forward planning and support to our hugely popular sports programs. With the addition of Coach Nicky Mintz – who completed his first full year as SCM athletic director – and his strong management of the program, students and parents in all sports enjoyed great seasons. Jim Meyn President, Booster Club 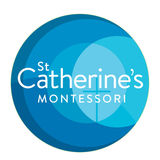