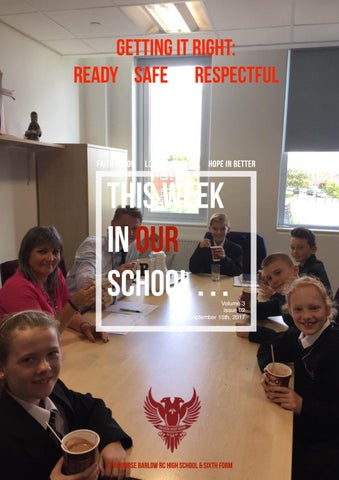 We are thatthis many assemblies wewith It lucky is about timeofofthe year that I meet hold each week are memorable and powerful. each Head of Department to review the Some summer’s challenge,exam someresults. celebrate, others prompt This involves deep thinking issues. Not many plenty ofabout usefuldifficult and thought-provoking move discussion, staff to tearsbut of itjoy to exclaim, is or usually talking“I’m about and letters. feelingnumbers quite emotional after Behind that.’ this data are stories: how pupils did, how they felt, what they liked and what they achieved. We Last Friday’s assembly elicited precisely that always focus on how things can be response as we invested our Pupil Leadership improved as In well as many celebrating went team for the year. July pupils what in what well. As a Catholic school, exam results are was then Year 10, applied to take on the roles of just one way of expressing the unique, GodPrefects, Heads of House, Deputies Head given talents and skills of eachand pupil. It is Girl and Boy. Inevitably, there were some important to look beyond the data sowho, I am after interviews, did not achieve their But delighted that much more of mygoal. job involves a greatbeing number did (thewalking photos around show just in classes, thehow school many and theretalking were),toso it wasstudents a delightand to staff. pupils, celebrate their achievement last week. More If ever or Year 11s will you join are theirfeeling ranks at as all thedespondent year goes on fatigued I reckon a quick tour of the school and we will be holding a special Mass in their would quickly raise your spirits. Let me honour. show you what I mean. Today (Thursday, September 29th) forwe instance, dropped In keeping with our ethos expect Iour pupils into Year 10 GCSE Music. There, I was to grow as servant leaders, leading not for glory delighted to listen to performances of or for themselves, simply for the way Beethoven’s but Ninth Symphony, HoldinBack which the theirRiver leadership can help and support and When the Saints Go Marching others.In. I also got to sit with Daniel and Chester as they demonstrated their prodigious DJing The portrayal leadership in the media is oftenthe talents. of Next, during lunch, I supervised canteen and made aarrogant, point of out-of-touch watching the not positive: self-serving, interactions takefrom placethe daily. Pupils leaders who seemthat remote impact of and staff holding doors open for one another, their decisions on others. Similarly, in sport we offering thanks, littletomoments personal have become all to used the rapid of cycle of appreciation and gratitude. Of course, football managers removed from their posts things don’t always go well in a school, but it after a run of bad results or of team captains is lovely to witness a voluntary apology from compromised actions off the field. is a Year 9by to their one of the lunch time staff,It or all thesee more important, therefore, that our school one pupil help another who is unsure offers where opportunities forclass. pupils and students to to go for learn to lead and to reflect on what it means to lead. In Sixth Form, I enjoyed a lengthy chat with Aidan who explained both the theory of differentiation its potential commercial The model of servantand leadership is drawn from application. In English they were studying the example of Jesus: humility, courage and play Blood and talkingset with love. the I can’t think of aBrothers more challenging of humour and excitement about superstitions; characteristics against which to measure in Year 7 RE they were dissecting our new ourselves, but I have every faith in our pupils mission statement and exploring the bringing these essential personal meaningsvalues withinto it. life. School is a busy, bustling, humming place.

I get to Maths to find all of Year 9 embroiled in a task that is so challenging and exciting that I want to stay and have a go myself. Having celebrated the older lettie? us turn to Outside it’s: “Sir, have you pupils, seen my the youngest, our arrivals. Year continue Can you open mynew bottle? What did 7you tothink settleofinlast well and make an What excellent night’s game? time is it, Sir?” and, on at least once a day, “Oh my impression the school. days!” It can be noisy at times and in a community this size we can’twas expect My first Hot Chocolate Friday with a group everyone to get on with each other all to thetell me of five Year 7s who were only too keen time. But it is our community, and a lively, all about their first impressions and offer me lovely, positive one at that. advice on what to buy my wife for her birthday (thanks Luke). Perhaps the single highlight of my week, if I had to pick, would be the conversation I had with Mrs. Fay who is leading the development of our new library. I am a library enthusiast and have been ever since I was little. The furthest reach of my memory is back to moments spent in our local library entranced by its colour and bright possibilities. On Twitter #RememberingMyLibrary reveals the hold that such an institution has: ‘A library card was a free pass to wonderment, words and the ability to roam the world’ observes one user, whilst another quotes the wrought iron gates of Stalybridge library, ‘Read, One of the reasons I make a point ofMark, spending Learn and Inwardly Digest.’ Others time with pupils in this way (along withtalk myof5-athe escape that a library represented or of day is so that sharing their theinterviews) refuge it offered fromthrough an unkind world. ideas and developing their voice and opinions, our pupils being leaders. There is Mrs. Fay grow spenttowards last Saturday peacefully nostacking reason the whyshelves they should wait until Year and we are inching 11, leadership at St. Ambrose Barlow me is open closer to opening. What thrilled was to herus all, each day. comment that several boys, some of whom affect a dislike of reading, were electrified by God Bless. of a library in their school: ‘You presence mean I can borrow this and, like, read it, Miss?’@BenDavis1972 was the breathless utterance of one Twitter: pupil. Our library is at the heart of the school: a space for being open to and sharing ideas and experiences. It is openplan and its shelves serve as a reminder that there should be no barrier to anyone using its volumes or seeking knowledge, solace, entertainment or information. I can’t wait to see it come to life in the weeks ahead thanks to Mrs. Fay and her band of helpers.

we expect our pupils to grow as servant leaders, leading not for glory or for themselves, but simply for the way in which their leadership can help and support others.

around the school this week Year 7 Wardley Hall Each year we take Year 7 pupils to Wardley Hall so that they can learn about their Catholic heritage and the life and history of St. Ambrose Barlow. A highlight is always seeing the skull of our Patron Saint, which is kept in the house. The rain did not dampen the spirits of the young people (or the staff) who were engaged and enthusiastic throughout the visit. Huge thanks from us to Bishop John and the staff who run the house and make the visit possible. Feast of St. Ambrose Barlow On Monday we held Masses and liturgies for the Feast of St. Ambrose Barlow. These were led by our chaplaincy team, co-ordinated by our Chaplain Miss Singleton and we were especially lucky that Father Gavin Landers from St. Charles Boromeo parish was able to join us to say Mass. John Pridmore visit Year 11 enjoyed some spiritual inspiration from guest speaker John Pridmore who shared the extraordinary story of his life and encouraged Year 11 to ‘be the beautiful thing God made you to be.’ Afterwards many Year 11s stayed for the Sacrament of Forgiveness. Former pupils’ success We also heard this week of the success of a number of former pupils. Megan Royle has just left 6th form and has secured a place at Oxford University to read Law - we congratulate her on this great achievement. Ex-student Brad Lees is currently in the final year of his Level 4 Civil Engineering Apprenticeship at Mott-MacDonald. He has been nominated and shortlisted for the prestigious Skills for Business Apprentice of the Year 2017. The awards ceremony takes place later this year. Former students Dan Bateson and Luke Steadman have both begun a cadet program with Laing O'Rourke after completing their A-Levels this summer. The cadet program involves sponsorship through a Civil Engineering degree at University of Liverpool starting later this month. Declan Massey (who left this summer after completing his GCSEs) is currently working for Civic Engineering in Manchester. Year 7 Year 7 have made a superb start to the year. When asked by Mr. Davis (HT) what they thought of their new school they were full of comments. Moving schools is never straightforward, especially from Y6 to Year 7. The primary schools in our Learning Community do such excellent work to nurture and develop young people that it is no surprise that the Year 6 Leavers find it hard to move on. Despite that, the new Year 7 pupils have shown great enthusiasm for their new school. Of a variety of their teachers they said: ‘He pushes you to do your best… she’s dead kind and helped me to settle in… she’s got a great sense of humour… I never used to like Maths but she has made it fun.’ New staff Meanwhile we have taken on a large number of new staff due to the success of our 6th form. We start this year as a school of nearly 1200 young people and over 150 staff. Amongst other things the new members of have taken the time to reflect on what it means to be part of St. Ambrose Barlow. One teacher said, ‘I already feel so welcome at the school… "Courageous curiosity" is the part of the mission statement that means the most to me because I think that encouraging and feeding pupils' curiosity will drive their enthusiasm, inspiration and interest in lessons.’ Year 10 Rugby Finally, we were delighted that the Year 10 boys’ rugby team took to the field again this year as Salford Champions. They remain undefeated after their first match and we look forward to them developing as players and as team this year.

January 9ththe at Siemens 8.40 am Rollercoaster Challenge; Top: at

Below: 6th formers at the Teenage Cancer4 Trust fundraiser

Above: Presenting our Year 11 pupil leadership team with their badges Below: The Year 10 rugby team