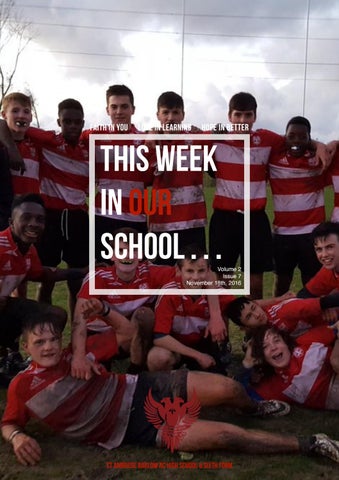 Mr. Davis, Headteacher, reflects on the Mr. Davis, week.Headteacher, reflects on the week. Since ItI last wrotethis thetime globe on itswith is about of has yearshifted that I meet axis. each It hasHead been of fascinating to listen to pupils Department to review the discussing the election of Donald Trump as the summer’s exam results. This involves next US President. delighted to plenty of usefulI am andalways thought-provoking see pupils and students engaged in current discussion, but it is usually talking about affairsnumbers and galvanised by politics, it saysdata much and letters. Behind this are about stories: their capacity for critical thought and how pupils did, how they felt, what reflection. This year has, they of course, offered they liked and what achieved. Werich pickings for anyone interested in politics. always focus on how things can be But that statement fact that wewhat all are improvedignores as well the as celebrating went affected by the outcome of these political well. As a Catholic school, exam results are decisions, whether weexpressing are interested or not. GodIt is just one way of the unique, all thegiven moretalents important, therefore, that our school and skills of each pupil. It is affordsimportant its youngtopeople the opportunity to I am look beyond the data so develop as citizens, future voters and future delighted that much more of my job involves leaders. being in classes, walking around the school and talking to pupils, students and staff. The last two weeks of the term have showcased several examples of our pupils’ engagement If ever you are feeling at all despondent or with citizenship and with the history and culture fatigued I reckon a quick tour of the school of Britain. For over a year now it has been an would quickly raise your spirits. Let me expectation that all schools promote ‘British show you what I mean. Today (Thursday, values’: democracy, the rule of law, individual September 29th) for instance, I dropped into liberty, mutual respect and tolerance for those of Year 10 GCSE Music. There, I was different faiths and beliefs. In our school, it is delighted to listen to performances of the values derived from our faith that come first Beethoven’s Ninth Symphony, Hold Back and inform our interpretation of these British theWe River When Saints Go do; Marching values. act and out of lovethe in all that we we In. I also got to sit with Daniel and Chester are nourished by our faith; we exercise hope in as they demonstrated prodigious all things. Consequently, ourtheir Catholic ethos DJing fits talents. during lunch, I supervised the well with BritishNext, values. canteen and made a point of watching the thattweeted take place daily. Pupils Earlierinteractions this week we an impressive filmand for one another, made staff by a holding group ofdoors Year open 10 pupils exploring the offering thanks, little moments of personal theme of British values. The film was created in appreciation and gratitude. Of course, partnership with Falinge High School and things don’t always goSchool, well in aboth school, but it Abraham Moss Community is lovely to witness a voluntary apology from schools that are very different to us. The a Year 9 to one of the lunch time staff, or process of developing the film took most of last seeitone pupil helpperfectly anotherthe who is unsure year and exemplifies high level of where to go for class. engagement that many of our pupils show when presented with challenging social, political and In ideas. Sixth Form, I enjoyed lengthy chat cultural In doing so theira education is with Aidan who explained both the theory richer, more demanding and more relevant.of differentiation and its potential commercial application. In English they were studying the play Blood Brothers and talking with humour and excitement about superstitions; in Year 7 RE they were dissecting our new mission statement and exploring the personal meanings within it. School is a busy, bustling, humming place.

I get to Maths to find all of Year 9 embroiled in a task that is so challenging and exciting that I want to stay and have a go myself. For all of the weeks we have dedicated Outside it’s:last “Sir,two have you seen my tie? time in assembly to commemorating the Can you open my bottle? What did youdead of the conflicts the past. There wastime a particular think of lastofnight’s game? What is it, emphasis this week on remembering the Battle Sir?” and, at least once a day, “Oh my ofdays!” the Somme. casualty statistics It can beThe noisy at times and in of a this three month-long engagement are so horrifying community this size we can’t expect they defy comprehension: 19,000 dead in one everyone to get on with each other all the day alone, 60,000 injured of which the youngest time. But it is our community, and a lively, was 12. positive one at that. lovely, It Perhaps would bethe easy for young people 2016 to single highlight of myinweek, if I feel so distanced from this event that it was had to pick, would be the conversation I had impossible to relate This week’s with Mrs. Fay who to. is leading the assemblies offered an alternative reality. Led Danielle development of our new library. by I am a and Eden (Year 10) each morning offered a library enthusiast and have been ever since potted history of the battle before reflecting on I was little. The furthest reach of my the personal cost of the conflict through three memory is back to moments spent in our stories. On entering the hall each pupil was local library entranced by its colour and given a card outlining the personal history of bright possibilities. On Twitter one of the casualties of the First World War. As #RememberingMyLibrary reveals the hold these were read out by the girls leading the that such an institution has: ‘A library card assembly the pupils with these cards stood up. was a free pass to wonderment, words and It was a simple and powerful device to connect the ability to roam the world’ observes one the teenagers of 2016 with the fallen of one user, whilst another quotes the wrought iron hundred years ago. More importantly, it was gates of Stalybridge library, ‘Read, Mark, another example of pupils leading and engaging Learn and Inwardly Digest.’ Others talk of with work on our shared British values and the escape that a library represented or of culture. the refuge it offered from an unkind world. God bless Mrs. Fay spent last Saturday peacefully stacking Ben Davis the shelves and we are inching closer to opening. What thrilled me was her Headteacher comment that several boys, some of whom affect a@BenDavis1972 dislike of reading, were electrified by Twitter: presence of a library in their school: ‘You mean I can borrow this and, like, read it, Miss?’ was the breathless utterance of one pupil. Our library is at the heart of the school: a space for being open to and sharing ideas and experiences. It is openplan and its shelves serve as a reminder that there should be no barrier to anyone using its volumes or seeking knowledge, solace, entertainment or information. I can’t wait to see it come to life in the weeks ahead thanks to Mrs. Fay and her band of helpers.

around the school this week This week we were visited by a Head of Religious Education from another school to undertake an assessment for the RE Quality Mark. This is a very prestigious award that indicates that a school is engaged in excellent work in this subject area. We are delighted to report that we received a very rare Gold award. The assessor said that it was one of the easiest and most enjoyable decisions that he had had to make and was full of praise for the pupils and staff with whom he had met. Congratulations must go to the whole RE department on their excellent work. You can find out more about the RE quality mark here http://www.reqm.org This Tuesday all pupils in Year 11 took part in mock interviews. These were organised by Mrs. Grindley, Head of Careers, and were supported by a willing team of volunteers from the business and industry communities. The pupils looked fantastic in their interview outfits and many reported how useful and challenging they had found the process. We were the focus of celebration in two publications this week. First our Oracy work, led by Mrs. Tulloch, featured in a research paper published by LMKCo and covered widely in the national media. You can read the full report here: http://media.wix.com/ugd/ 2c80ff_91a02276fdf645d2b70ad433049306a3.p df . Secondly, our similarly groundbreaking work on Design Engineer Construct was the subject of an article by the Construction Industry Training Board and can be read here: http:// www.citb.co.uk/news-events/blogs/ bim4education-starts-in-the-classroom/? utm_content=buffer26450&utm_medium=social &utm_source=twitter.com&utm_campaign=buffe r As alluded to in Mr. Davis’s introduction we have dedicated considerable time to Remembrance activities. These have included Remembrance assemblies led by Year 7 last week; short

services of Remembrance in the chapel for Years 12 and 13; assemblies this week led by Year 10 pupils; and a two minutes’ silence on November 11th. In sports news, we are delighted to report that the KS4 Girls team are Salford champions. The Year 9 Rugby team is through to the quarter finals of the Champion schools cup and face Swinton in the semis of the Salford cup. The junior girls football team beat All Hallows 10-1 while the netball team enjoyed an easy 4 - 1 victory over Bridgewater. The Year 7 team replicated this win taking the honours 3-2. Across the city, Year 10 beat Walkden at netball 9-5. In school 7J ran away with victory in the interhouse volleyball. Meanwhile the Year 11 boys rugby team pulled off an astonishing and characterful win over Wright Robinson Sports College. The Sixth form business studies group welcomed representatives from Beever Struthers this week to talk about the details, challenges and opportunities of business finance. The Sixth Form also benefited from a Careers Fair at which they explored a wide range of potential careers. Year 10s were also learning more about the world and its complexities as they spent a day learning about unions with representatives from Unite. This week in form time pupils focused on AntiBullying week with all pupils signing a pledge to support one another and stamp out bullying. Our final total for the Year 7 Cafod fundraising fast is a whopping £635.54. Congratulations to Lewis Barker (Year 9) who achieved his ambition of securing a place as a Fire Service Cadet this week. Well done Lewis we’re all proud of you.

Year 11 at their Mock Interviews and Year 12 learning all about business.

ATTENDANCE We aim for 100% attendance for all of our students and have set 96% as satisfactory attendance for this year. Attendance is monitored period-by-period and statistics are published each week. Excellent attendance guarantees excellent learning. Best Attendance by form (w/b November 7th):