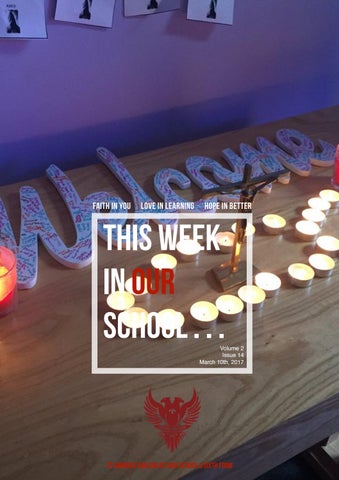 Mr. Davis, Headteacher, reflects on the Mr. Davis, Headteacher, reflects on the week. week. This week in assemblies havethat been It is about this time we of year I meet with celebrating Women’s History Month and the each Head of Department to review specifically on Wednesday, International summer’s exam results. This involves Women’s Day. It has been a treat to consider plenty of useful and thought-provoking the all-too-often downplayed discussion,unsung but it isand usually talking about contribution to billions of inspiring to the numbers and letters. Behindwomen this data are stories: of how did,We howhave theyreflected felt, what development ourpupils society. they liked and what they achieved. on women who have invented, competed, We always focus on how things be innovated and changed the world. can As the improved as well as celebrating what assemblies have recognised no sphere of went As a Catholic school, exam results humanwell. endeavour is without the influence of are just one way of expressing the unique, Godwomen. given talents and skills of each pupil. It is important to look beyond the data so I am On Thursday the PE department led the delighted that much more of my job involves assembly and as well as focusing on female being in classes, walking around the school inventors throughout the ages (an interesting and talking to pupils, students and staff. and telling collection of innovations from the ironingIf board to Kevlar and beyond) the Year 10 ever you are feeling at all despondent or audience was gripped a short filmofabout a fatigued I reckonby a quick tour the school youngwould femalequickly American player. Let Quite raisesoccer your spirits. me show you what I mean. Today (Thursday, apart from the disparity in pay that she September 29th) for instance, I dropped highlighted the differences between males andinto Year 10 GCSE Music. There, I was females in the world of football were examined delighted listen tothese performances with stark clarity.to Despite her sheerof Beethoven’s Ninth Symphony, Hold Back determination, resilience and commitment in the the River and When the Saints Go Marching face of all that attempted to hold her back was In. I also got to sit with Daniel and Chester extraordinary. This film was partnered with as they demonstrated their prodigious DJing another on Malala Yousafzai, the Pakistani girl the talents. Next, during lunch, I supervised shot by the Taliban for advocating canteen and made a point ofthe watching the importance of education for place girls. daily. The contrast interactions that take Pupils and between her experience and that of the girls in staff holding doors open for one another, Y10 isoffering very powerful. It will have given many of thanks, little moments of personal our pupils pause forand thought, supported as they appreciation gratitude. Of course, always go well a school, but it are bythings a verydon’t well-resourced, free,ineducation. is lovely to witness a voluntary apology from a Yearto 9 speak to one to of the the whole lunch time I felt moved year staff, groupor see one pupil help another who is after the presentation by pupils. I began unsure by to go for class. telling where the story of my late grandmother, an inspiring and unassuming woman who served In Sixth Form, I enjoyed a lengthy chat with as a Fire Warden in the City of London during Aidan who explained both the theory of World differentiation War 2. She worked raids and and itsthrough potentialaircommercial walkedapplication. home through the devastation of In English they were studying German raids. Each and evening she put thebombing play Blood Brothers talking with humour and excitement about superstitions; in Year 7 RE they were dissecting our new mission statement and exploring the personal meanings within it. School is a busy, bustling, humming place.

I get to Maths to find all of Year 9 embroiled in a task that is so challenging and exciting that I want to stay and have a go myself. her life in danger protect Bank Outside it’s: “Sir,tohave youthe seen my Of tie?England inCan the centre of the City, while her fiancee you open my bottle? What did you served overseas. In game? her old age she dismissed think of last night’s What time is it, her experiences as nothing special, Sir?” and, at least once a day, “Oh ‘they my left no days!” canshe be noisy at say, timesmainly and intoairritate mark on Itme’, liked to community thisifsize can’t expect my father. Even her we nonchalant attitude was a everyone to get on with each other the true reflection of her views on her waralltime time. But it is our community, and a lively, service, she left a mark on me. lovely, positive one at that. She taught me the importance of perseverance, Perhaps the single highlight of my week, if I of resilience, of humour in dark moments and of had to pick, would be the conversation I had honesty. of quoting with Mrs.She Faywas whofond is leading the Shakespeare, ‘To thine own self be true and then development of our new library. I thou am acanst to nolibrary man be false’ and had many sayings, some enthusiast and have been ever since ofI which would have her grandchildren was little. The furthest reach of my rolling their eyes is in back mocktofrustration favourite memory moments(a spent in ourwas, ‘patience is a entranced virtue, possess if you and can, local library by itsitcolour bright possibilities. On never Twitterin a man’). She seldom in a woman and #RememberingMyLibrary theand hold kept to her o’clock whiskey reveals all her life faced that such an institution has: ‘A library card old age and mortality without apparent fear. I waslucky a free pass to words and was enough towonderment, see my daughters the ability to roam the world’ observes establish a relationship with their great one user, whilst another grandmother or ‘GG’. quotes the wrought iron gates of Stalybridge library, ‘Read, Mark, Learn and Inwardly Digest.’ Others talk of So it was that today, the assembly led by pupils the escape that a library represented or of encouraged to make a an linkunkind between GG, my the refuge itme offered from world. own children and the girls who attend St. Ambrose Let’s celebrate the women Mrs. FayBarlow. spent last Saturday peacefully and girls inthe ourshelves lives and think particularly stacking and we are inching of the future to offer our thrilled young. me was her closerwe towish opening. What comment that several boys, some of whom affect a dislike of reading, were electrified by presence God Bless. of a library in their school: ‘You mean I can borrow this and, like, read it, Miss?’ was the breathless utterance of one Ben Davis pupil. Our Headteacherlibrary is at the heart of the school: a space for being open to and sharing@BenDavis1972 ideas and experiences. It is openTwitter: plan and its shelves serve as a reminder that there should be no barrier to anyone using its volumes or seeking knowledge, solace, entertainment or information. I can’t wait to see it come to life in the weeks ahead thanks to Mrs. Fay and her band of helpers.

around the school this week Since we returned from half term we have had a busy couple of weeks. Lent has begun and we celebrated this with services on Ash Wednesday to distribute ashes to pupils. These services took place in the chapel and were led by pupils and Monsignor Smith from St. Charles’ parish. The half term holiday was punctuated by the return of the Year 10 and year 12 trip to New York. Pupils and students had spent a whirlwind five days in the Big Apple experiencing all that the city that never sleeps has to offer from Broadway to MOMA. Assemblies have been led across the two weeks by pupils and students. Sixth formers took charge of the Lenten assemblies for all year groups and the PE department were responsible for Women’s History Month. We welcomed parents and carers from Years 8 and 9 into school last Thursday evening for the Curriculum Information evening. The new curriculum we are offering was discussed and the curriculum choices that pupils have were made clear. We are now in the process of collating responses and building the timetable for next year. Thank you to all parents and carers who attended. The Science department brought their subject even more to life with a collaboration with the army who came in to look at the use of materials in a military context. The development of the science garden continues with beds built and trees ready to plant. Inside the building the Library has taken a step closer to completion with the procurement of management software to manage stock and track reading achievements. We are seeking parent and carer volunteers to assist with the process of entering the book data into the system. Our sixth form students have also been learning more about life beyond school with CV surgeries and sessions on jobs in the creative industries and university applications. Our Bookworms team took part in the World Book Day quiz and our young journalists have been out and about in Manchester for BBC school report covering topics ranging from skills shortage and Brexit to burnt toast! We also learnt this week of our success in raising money for charity: over £525 was raised on Valentines’ Day through the jumper wearing and the photo booth. Year 8 have enjoyed a fabulous Have A Go Day experiencing careers from all walks of life including bricklaying, media make-up, hospitality, tiling and first aid. The walking wounded around school were very impressive.

ATTENDANCE We aim for 100% attendance for all of our students and have set 96% as satisfactory attendance for this year. Attendance is monitored period-by-period and statistics are published each week. Excellent attendance guarantees excellent learning. Best Attendance by year (w/b February 27th):

The BBC school report crew out and about getting stories!