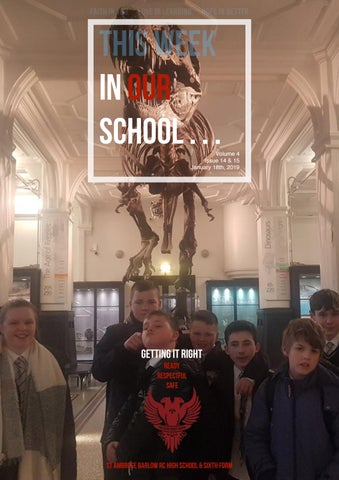 getting it right ready respectful safe

Already a fortnight past.of The of It is about thisistime yearcelebrations that I meet with New Year are long gone and we are settled into each Head of Department to review the the new year andexam the new term.This While the summer’s results. involves country convulses itself over Brexit, the serious plenty of useful and thought-provoking business of education and the development of discussion, but it is usually talking about youngnumbers people continues apace at St. Ambrose and letters. Behind this data are Barlow.

stories: how pupils did, how they felt, what they liked and what they achieved. We Our term began by on welcoming three always focus how things cannew be staﬀ to the improved school. Miss Marsh joined us as Teacher as well as celebrating what went of Health and Social Care, Mrs Gould joined usare well. As a Catholic school, exam results in the just RE department and Miss Jackson began one way of expressing the unique, Godher tenure Head and of Music. pupils have givenas talents skills ofThe each pupil. It is settledimportant in very well in the first two weeks of to look beyond the data so Iterm am and, as usual, itthat is the interactions withjob them delighted much more of my involves that are the highlights any working being in classes,ofwalking aroundweek.

the school and talking to pupils, students and staff. Last year we trained thirty anti-bullying ambassadors andare this term are taking this If ever you feeling at all despondent or furtherfatigued by working with a team of twelve I reckon a quick tour of theYear school 10s onwould solutions-focused coaching In quickly raise your spirits.(SFC). Let me July one of the leading exponents of SFC, Dr. show you what I mean. Today (Thursday, Geoﬀ September James, trained a for group of staﬀI in the into 29th) instance, dropped practice and we have been using it to support Year 10 GCSE Music. There, I was vulnerable pupils to to reduce the needof for delighted toand listen performances exclusion, with some success. Geoﬀ came Beethoven’s Ninth Symphony, Hold Back back to train the Year 10s.

theschool River this and week Whentothe Saints Go Marching In. I also got to sit with Daniel and Chester The sessions place in atheir circle, something as they took demonstrated prodigious DJing that the pupils initially found intimidating, not the talents. Next, during lunch, I supervised least because a set-up is uncommon canteen such and made a point of watchinginthe most classrooms. Undeterred Geoﬀ ledPupils them and interactions that take place daily. through the same training programme that the staff holding doors open for one another, adultsoffering had experienced, nothing was dumbedthanks, little moments of personal down appreciation or condensed. explored andThey gratitude. Of and course, discussed the same theories, the same things don’t always go well in a school, but it research from Sarah-Jayne Blakemore on thefrom is lovely to witness a voluntary apology teenage brain (note to parents and carers: a Year 9 to one of the lunch time staff,read or it and see prepare have your eyes opened) and one to pupil help another who is unsure they engaged where toingothe forsame class.discussions that the staﬀ had done.

In Sixth Form, I enjoyed a lengthy chat with I popped in occasionally (driven by atheory of Aidan who explained both the combination of nosiness or as I callcommercial it, differentiation and its potential curiosity and fascination) only to be drawn into application. In English they were studying the circle and questioned on everything from the play Blood Brothers and talking with the best bits ofand theexcitement my job to my favourite icehumour about superstitions; cream.in That may sound trivial, but it was part Year 7 RE they were dissecting our new of an exploration of typesand of questioning mission statement exploring theand powerpersonal relationships anyway ice-cream is is a meanings within it. School important.

busy, bustling, humming place. By the end of the day the group that had begun unsure, tentative and overawed was confident

I get to Maths to find all of Year 9 embroiled in a task that is so challenging and exciting that I want to stay and have a go myself. and driven, “we need to start this work as soon Outside it’s: “Sir, have you seen my tie? as possible with other pupils,” was the assertive

Can you open my bottle? What did you consensus. And they are right. At it is heart think of last night’s game? What time is it, Solutions-Focused Coaching is a simple, Sir?” and, at least once a day, “Oh my powerful tool that assumes (rightly in my view) days!” It can be noisy at times and in a that individual’s have the solutions to the community this size we can’t expect challenges they within themselves. With everyone to getface on with each other all the coaching founded on the principle that we time. But it is our community, and a lively,are resourceful, successful and hopeful (or wish to lovely, positive one at that. be) the solutions can be elicited and people can take responsibility forhighlight their personal growth. Perhaps the single of my week, if I It ishad an approach that echoes completely our to pick, would be the conversation I had fundamental Catholic with Mrs. Fay who is beliefs leadingabout the the dignity and capacity of each one of us it was development of our new library.and I am a moving to see pupils now taking the lead with it.

library enthusiast and have been ever since I was little. The furthest reach of my memory is back to moments spent in our local library entranced by its colour and bright possibilities. On Twitter #RememberingMyLibrary reveals the hold that such an institution has: ‘A library card was a free pass to wonderment, words and the ability to roam the world’ observes one user, whilst another quotes the wrought iron gates of Stalybridge library, ‘Read, Mark, Learn and Inwardly Digest.’ Others talk of Inthe a school wellaover 1000 pupils there are escapeofthat library represented or of going to be a fair few eccentrics and characters the refuge it offered from an unkind world. one of whom shared with me my favourite moment ofspent the week. Standingpeacefully in the sleet on Mrs. Fay last Saturday lunch duty, all of us wishing the bell would just stacking the shelves and we are inching ring, a lovely, chatty Year 9 came up meher as if closer to opening. What thrilled meto was hecomment wanted to share a secret of great import. that several boys, some of whom “Sir,” heawhispered, “is it ever tooelectrified early or too affect dislike of reading, were by late for a mince pie? Cos they’re giving them presence of a library in their school: ‘You out in PE andborrow I’ve just had two.” mean I can this and, like,Confident read it, that heMiss?’ had imparted a deep universal truth was the breathless utterance ofhe one toddled oﬀ Period pupil. Ourtolibrary is 5.

at the heart of the school: a space for being open to and What a week. a great job. Remember, sharing ideasWhat and experiences. It is openeveryone is resourceful, hopeful successful plan and its shelves serve as a and reminder - that perhaps those represent us at Westminster there should be no barrier to anyone should heed oforyoung people like our Year using take its volumes seeking knowledge, 10s.

Our wonderful choir performing in Walkden Shopping Centre this week.

Top: at the Siemens Rollercoaster Challenge; Below: 6th formers at the Teenage Cancer4 Trust fundraiser

Our pupils taking part in the FACT Hackathon this week at Manchester Museum, exploring the solutions to the cityâ&#x20AC;&#x2122;s challenges. Pupil leaders in action.

Top: at the Siemens Rollercoaster Challenge; Below: 6th formers at the Teenage Cancer5 Trust fundraiser

Our forms are so important to us and the school’s ethos. This week we have completed our New Year assemblies with every member of our school community setting new year resolutions. We also celebrated Martin Luther King Day as these pictures of one of our forms shows. You’ll more of this soon, but we had a visit from Hannah Jepson, of The Proud Trust, who undertook an initial overview of the school’s work to support LGBT+ pupils. As a result of her visit we have convened an Inclusion and Development Council. Standby for updates in the near future on this important issue. Top: at the Siemens Rollercoaster Challenge; Below: 6th formers at the Teenage Cancer6 Trust fundraiser

One of our most popular courses in Sixth Form is Psychology. It has a very healthy uptake and the pupils thrive on the exciting work undertaken in the classes. Here you can see pupils learning about attachment theory by making families of eggs - it made sense to them! Left: Mr. McDonagh in Dubai promoting the brilliant work of DEC in schools.

Top: at the Siemens Rollercoaster Challenge; Below: 6th formers at the Teenage Cancer7 Trust fundraiser