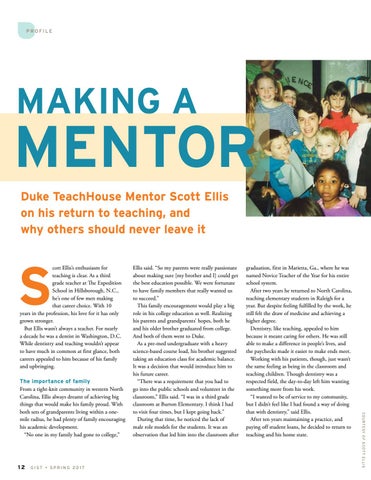 MENTOR Duke TeachHouse Mentor Scott Ellis on his return to teaching, and why others should never leave it

cott Ellis’s enthusiasm for teaching is clear. As a third grade teacher at The Expedition School in Hillsborough, N.C., he’s one of few men making that career choice. With 10 years in the profession, his love for it has only grown stronger. But Ellis wasn’t always a teacher. For nearly a decade he was a dentist in Washington, D.C. While dentistry and teaching wouldn’t appear to have much in common at first glance, both careers appealed to him because of his family and upbringing.

graduation, first in Marietta, Ga., where he was named Novice Teacher of the Year for his entire school system. After two years he returned to North Carolina, teaching elementary students in Raleigh for a year. But despite feeling fulfilled by the work, he still felt the draw of medicine and achieving a higher degree. Dentistry, like teaching, appealed to him because it meant caring for others. He was still able to make a difference in people’s lives, and the paychecks made it easier to make ends meet. Working with his patients, though, just wasn’t the same feeling as being in the classroom and teaching children. Though dentistry was a respected field, the day-to-day left him wanting something more from his work. “I wanted to be of service to my community, but I didn’t feel like I had found a way of doing that with dentistry,” said Ellis. After ten years maintaining a practice, and paying off student loans, he decided to return to teaching and his home state.

The importance of family From a tight-knit community in western North Carolina, Ellis always dreamt of achieving big things that would make his family proud. With both sets of grandparents living within a onemile radius, he had plenty of family encouraging his academic development. “No one in my family had gone to college,”

Ellis said. “So my parents were really passionate about making sure [my brother and I] could get the best education possible. We were fortunate to have family members that really wanted us to succeed.” This family encouragement would play a big role in his college education as well. Realizing his parents and grandparents’ hopes, both he and his older brother graduated from college. And both of them went to Duke. As a pre-med undergraduate with a heavy science-based course load, his brother suggested taking an education class for academic balance. It was a decision that would introduce him to his future career. “There was a requirement that you had to go into the public schools and volunteer in the classroom,” Ellis said. “I was in a third grade classroom at Burton Elementary. I think I had to visit four times, but I kept going back.” During that time, he noticed the lack of male role models for the students. It was an observation that led him into the classroom after 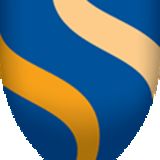 A special 10th anniversary issue featuring the new MIDS degree program, social science on the radio, and a Q&A with Jana Schaich Borg.

A special 10th anniversary issue featuring the new MIDS degree program, social science on the radio, and a Q&A with Jana Schaich Borg.