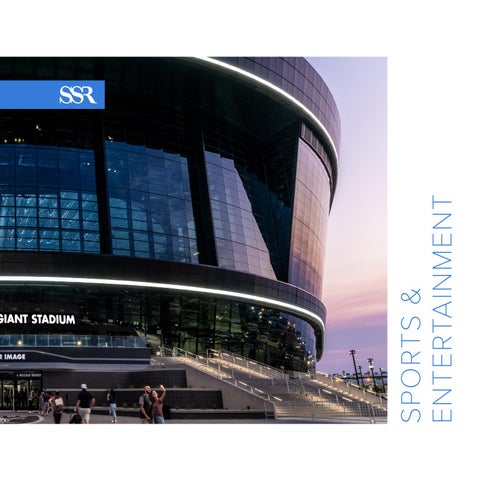 GET TO KNOW US Smith Seckman Reid, Inc. (SSR) has been providing consulting engineering services for over 50 years. We have a staff of over 425 in 12 offices and are currently ranked 12th among consulting engineers by Building Design and Construction magazine. For the past 25 years, SSR has had a dedicated team specializing in the areas of mechanical, electrical, plumbing, environmental, structural, and technology engineering design

for sports and entertainment facilities. Our expertise also includes commissioning and energy management. As a matter of principled design for every major project, we integrate energy modeling into the design from the beginning, using the models to guide the design, applying life cycle costs, maintenance factors, and architectural considerations to all decisions.

AS A MATTER OF PRINCIPLED DESIGN FOR EVERY MAJOR PROJECT, WE INTEGRATE ENERGY MODELING INTO THE DESIGN FROM THE BEGINNING, USING THE MODELS TO GUIDE THE DESIGN, APPLYING LIFE CYCLE COSTS, MAINTENANCE FACTORS, AND ARCHITECTURAL CONSIDERATIONS TO ALL DECISIONS.

We have a long history of designing sustainable sports facilities, including the LEED Platinum® UCLA Health Training Center, Little Caesar’s Arena, the new Golden State Warriors Chase Center, the new Las Vegas Raiders stadium, and the University of North Texas’ Apogee Stadium (the first LEED Platinum® college stadium in the country). We also are proud to work as direct consultants to the NBA and the NHL, with extensive experience with ice floor design.

Continuous Commissioning®, CC® and PCC® are registered trademarks of the Texas A&M Engineering Experiment Station, a member of the Texas A&M University System, an agency of the State of Texas.

ALLEGIANT STADIUM LAS VEGAS, NV SSR provided engineering services for the Allegiant Stadium in Las Vegas, Nevada. The Stadium operates as a state-of-the-art independent venue for sporting events, concerts, trade shows or other large events. The Stadium is home to an NFL football team (Las Vegas Raiders) and an NCAA Football Team (UNLV Rebels) and has a permanent seat capacity of 65,000. Specifically designed to be ideally suited to hosting world class sporting events such as Super Bowls and the FIFA World Cup Finals, the seat capacity is able to be temporarily expanded up to 72,000 seats. The Stadium has a fixed roof over the field of play which allows the facility to be used for indoor events.

The 750,000 SF, 40-suite Amway Arena is home to the Orlando Magic and is a fullservice entertainment facility. The project had a construction cost of $295 million and opened in the fall of 2010.

The new Dickies Arena is a state-of-the-art multi-purpose facility designed for concerts, sporting events, rodeo, and the monthlong Fort Worth Stock Show. Dickies Arena will seat 14,000 for concerts and 9,300 for equestrian and rodeo events. The facility also features 91,315 SF of space for indoor stock booths or pens, suitable for 400 spaces. SSR is providing mechanical, electrical, plumbing, fire protection, and technology design services for the facility.

The Amway Arena was designed with energy conservation in mind and received LEED Gold® certification from the U.S. Green Building Council (USGBC).

The building also serves as the headquarters for ownership, staff and front office basketball operations. It is the first NBA facility to introduce features for the surrounding community such as publicly accessible food and beverage and fitness retail areas. The building is on course to receive LEED certification thanks in part to the many mechanical, electrical and plumbing energy performance and saving features include in this design.

The KFC Yum! Center is a 22,000-seat, multi-use arena for the City of Louisville and home to the basketball programs of the University of Louisville Cardinals, a member of the Atlantic Coast Conference. The arena is approximately 717,000 SF and is equipped with an ice floor. Additionally, it was designed to accommodate a wide variety of other events including NCAA championships such as wrestling, swimming, and volleyball as well as concerts, circus, boxing, and ice shows.

UCLA HEALTH TRAINING CENTER LOS ANGELES, CA After decades of bouncing from practice space to space, the Los Angeles Lakers finally have a permanent home. Opened in the spring of 2017, the new LA Lakers headquarters and training facility was designed to encourage integration across all aspects of team operations, while keeping basketball at the center of the design and focus. The two-story facility is designed out from a double basketball court and includes two half-courts, a training area, team area, atrium, and corporate headquarters. The state-of-the-art facility was designed with many sustainable elements and achieved LEED Platinum® certification.

LITTLE CAESARS ARENA DETROIT, MI The new Little Caesars Arena serves as home to the Detroit Red Wings, Detroit Pistons, and numerous other sports, entertainment, and community events. The Arena is the cornerstone of a new 45-block redevelopment in downtown Detroit called The District Detroit. During the design of the 700,000 SF arena, there were many challenges by ownership, including changing architects and the project delivery method. The decision was made to go to a design assist delivery method after issuing final construction documents, creating immediate coordination challenges between the design team and the construction team. By working closely together with the contractor trades, the team was able to develop trust to keep the project on schedule toward the completion date. SSR provided mechanical, electrical, plumbing, and fire protection design, along with energy consulting for the arena.

VTB Stadium & Arena serves as the home to the 2018 HC Dynamo and Moscow Dynamo football club in Moscow. The facility is two very large structures under one roof. The centerpiece structure is 1,550,500 SF and houses a dual concourse, 45,461-seat stadium and a 16,500-seat hockey arena, as well as two levels of retail and two levels of parking. The other structure is a 205,000 SF practice facility with full size practice areas. SSR provided mechanical, electrical, plumbing, and fire protection design. The project was completed in 2016 at a construction cost of $780 million.

In early 2016 the Brooklyn Nets moved into their new, 70,000 SF training center, bringing all team operations into Brooklyn. Work on the facility included raising the current ceiling from 12 feet to 34 feet to accommodate arching jump shots. The design team elected to build the new, high ceiling, above the existing roof. Infrastructure like lighting, HVAC and retractable baskets were installed.

Dick’s Sporting Goods Park is an 18,000seat stadium that serves as the home of the Colorado Rapids, a Major League Soccer team. The facility features a unique concourse that allows for unobstructed views of the playing field. It also includes 20 loge-level suites and five locker rooms as well as a state of the art heating and drainage system for the field. The facility can also be used for concerts and festivals at which seating can be expanded to hold 26,000 patrons. The stadium opened in April of 2007.

FIRST TENNESSEE PARK NASHVILLE, TN First Tennessee Park is the new home of the minor league base ball team the Nashville Sounds. The stadium sits between Third and Fifth Avenue on the east and west, and between Jackson Street and Harrison Street on the north and south. The ballpark has 8,500 fixed seats, a huge parking lot, and a pedestrian greenway, among other things. SSR provided mechanical, electrical, plumbing, and technology servivces, as well as LEED® MEP credit coordination and energy modeling services for the facility. The ballpark opened for the 2015 season. Systems include structured cable system design support for all ball park technology requirements.

CHASE CENTER SAN FRANSISCO, CA SSR was selected to provide MEP design and LEED facilitation services for Chase Center, the new home of the Golden State Warriors. This state-of-the-art 18,000-seat arena sits on the Bay just to the south of the Bay Bridge. It is was completed in time for the 2019 season. The arena also hosts concerts, family shows, conferences, and various other events. Also located on the site are two mixed-use office buildings and a large public plaza. Our scope of work also included LEED Consulting and energy modeling for the three buildings on site, each being designed to achieve a LEED Gold certification.

BRIDGESTONE ARENA NASHVILLE, TN Bridgestone Arena is a 750,000 SF complex designed to meet NBA/NHL standards/capacities of 20,000 for concerts, 18,500 for basketball, and 17,500 for hockey. The facility includes 72 luxury boxes and serves as the home of the Nashville Predators of the National Hockey League. The project was completed in 1996 at a construction cost of $144 million. More recently, SSR provided engineering design for $6.26 million upgrades. The project included lighting improvements and a newly designed HVAC equipment to improve dew point and ice conditions of the playing surface.

BB&T PARK CHARLOTTE, NC SSR provided mechanical, electrical, plumbing, and fire protection design services for this new, minor league ball park in uptown Charlotte. The 10,000-seat stadium is home to the Charlotte Knights. The stadium features a two-level club with skyline views as well as a VIP, climate-controlled club with full service bar. In total, there are 975 club seats and 22 luxury suites at the ballpark. The project was completed in time for the 2014 season. In addition to MEP services, SSRCx provided LEED® MEP Credit Coordination and LEED Energy Modeling. The project achieved LEED Certified® certification in June of 2014.

AMON G. CARTER STADIUM FORT WORTH, TX SSR provided services for a multi-phase expansion and renovation to the existing Amon G. Carter Stadium on the campus for Texas Christian University. The project included the addition of a new press tower with club suites, athletic offices, and press level suites. A new concourse, concessions, and restrooms were also included. The project was completed in 2012 at a cost of $165 million. SSR was responsible for mechanical, electrical, plumbing, and fire protection design. The project achieved LEED Silver® certification. In 2017, SSR was asked to provide engineering design services for a $100 million premium seating expansion of Amon G. Carter Stadium. Completion is expected in time for the 2019 season on a project that will feature two new levels of luxury seating above the current upper deck on the east side of the stadium. 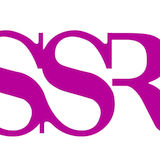