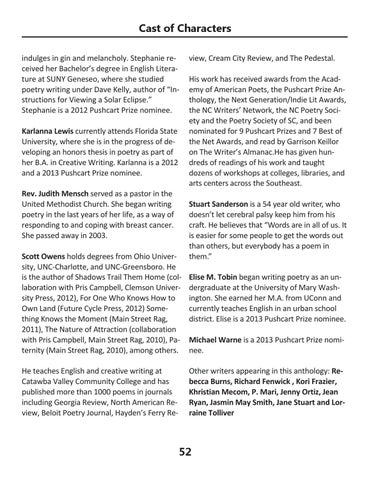 Cast of Characters indulges in gin and melancholy. Stephanie received her Bachelor’s degree in English Literature at SUNY Geneseo, where she studied poetry writing under Dave Kelly, author of “Instructions for Viewing a Solar Eclipse.” Stephanie is a 2012 Pushcart Prize nominee. Karlanna Lewis currently attends Florida State University, where she is in the progress of developing an honors thesis in poetry as part of her B.A. in Creative Writing. Karlanna is a 2012 and a 2013 Pushcart Prize nominee. Rev. Judith Mensch served as a pastor in the United Methodist Church. She began writing poetry in the last years of her life, as a way of responding to and coping with breast cancer. She passed away in 2003.

view, Cream City Review, and The Pedestal. His work has received awards from the Academy of American Poets, the Pushcart Prize Anthology, the Next Generation/Indie Lit Awards, the NC Writers’ Network, the NC Poetry Society and the Poetry Society of SC, and been nominated for 9 Pushcart Prizes and 7 Best of the Net Awards, and read by Garrison Keillor on The Writer’s Almanac.He has given hundreds of readings of his work and taught dozens of workshops at colleges, libraries, and arts centers across the Southeast. Stuart Sanderson is a 54 year old writer, who doesn’t let cerebral palsy keep him from his craft. He believes that “Words are in all of us. It is easier for some people to get the words out than others, but everybody has a poem in them.”

Elise M. Tobin began writing poetry as an undergraduate at the University of Mary Washington. She earned her M.A. from UConn and currently teaches English in an urban school district. Elise is a 2013 Pushcart Prize nominee. The best writing from the Stepping Stones Magazine website as voted by our readers. This is the first in an annual series, so we cover the y...

The best writing from the Stepping Stones Magazine website as voted by our readers. This is the first in an annual series, so we cover the y...