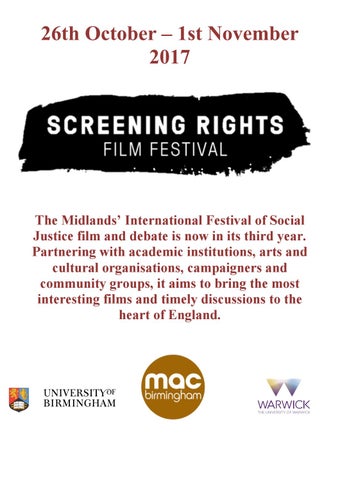 The Midlandsâ&amp;#x20AC;&amp;#x2122; International Festival of Social Justice film and debate is now in its third year. Partnering with academic institutions, arts and cultural organisations, campaigners and community groups, it aims to bring the most interesting films and timely discussions to the heart of England.

Tramontane is a Lebanese drama in which Rabih, a young blind man, travels across the country in search of his true identity after discovering that his identification card is a forgery. He meets people on the far fringes of society who tell their own stories and open further questions about his origins. Descending into a void at the heart of his existence, Rabih encounters a nation incapable of telling his or its own narrative. “This echt-Lebanese drama intriguingly delves into the innumerable layers of deceit and willful amnesia that originated in the civil war but continue to straightjacket the nation&#39;s psyche” – Jay Weissberg, Variety. “interesting and distinctive” – Peter Bradshaw, The Guardian *Winner of the Grand Golden Rail at the 2016 Cannes International Film Festival*

+ short film ‘Live like a Porcupine ‘ by University students in Ramallah, Palestine + Post-screening Q&amp;A tbc In order to confront the ghosts that haunt him, Palestinian director Raed Andoni assembles an eclectic group of ex-prisoners to build a replica of Al-Moskobiya, Israel’s main interrogation centre, where he was himself jailed at age 18. From fragmentary memory, day after day, they give shape to the interrogation centre they all experienced, and re-enact its stories. As the walls of the cells rise, the tongues and the emotions loosen. “A boldly original take on the phantom menace of post-traumatic stress” – Stephen Dalton, The Hollywood Reporter “A riveting, terrifying recreation of past trauma” – East End Film Festival

*Winner of Best Documentary at the 2017 Berlin International Film Festival*

2017 | 90 mins | 12A Language: English + Post-screening Q&amp;A with Jennifer Brea, the film’s director + Pre-screening workshop on ‘VR, Alternative realities and Social Justice’ with experts from field at 12.30pm in Deloitte Room at mac. The VR experience of the film will be installed at mac throughout the festival.

Twenty-eight year-old Jennifer Brea is working on her PhD at Harvard and months away from marrying the love of her life when she gets a mysterious fever that leaves her bedridden and looking for answers. Determined to live, she turns her camera on herself and her community - a hidden world of millions confined to their homes and bedrooms by ME, commonly called Chronic Fatigue Syndrome. “riveting....equal parts medical mystery, science lesson, political advocacy primer and even a love story” – The San Francisco Chronicle “powerfully insists on giving a voice to victims whose greatest challenge, apart from their symptoms, is surmounting a world of indifference” – The New York Times *Winner at Sundance, Nashville, RiverRun and Sheffield Docs Film Festivals 2017*

2016 | 89 mins | 12 Language: English + Post-screening panel with Nick de Pencier, the film’s director, Stephen Gale, former GCHQ officer, Joe Westby from Amnesty International and Dr Marianne Wade from the Birmingham Law School. Chaired by historian Dr Steve Hewitt. Please join us for a reception after the film Black Code is a gripping account of how governments control and manipulate the internet in order to censor and monitor their citizens. With stories from exiled Tibetan monks circumventing China’s surveillance apparatus, Syrian citizens tortured for Facebook posts, Brazilian activists using social media to distribute alternative news, and Pakistani online violence against women, we see first hand the high-stakes consequences that our unprecedented level of digital communication can produce. As this battle for control of cyberspace is waged, our ideas of citizenship, privacy, and democracy will be challenged to the very core. “A cautionary documentary on the surveillance state” – Simon Houpt, The Globe and Mail

2017 | 85 mins | 12 Language: Arabic, English subtitles + Post-screening discussion with activist and star of the film, Mahmoud Hassino, Simon Ware from Amnesty’s LGBTI network, Syrian activist and journalist, Razan Ghazzawi and director, Ayşe Toprak (on skype). Chaired by Jose Arroyo from the University of Warwick. Mr. Gay Syria follows two gay Syrian refugees who are trying to rebuild their lives. Husein is a barber in Istanbul living a double life between his conservative family and his gay identity. Mahmoud is the founder of Syria’s LGBTI movement and is a refugee in Berlin. What brings them together is a dream: to participate in an international beauty contest as an escape from their trapped lives and an answer to their invisibility. Will the dream come true or will the refugee crisis and the harsh consequences of being gay in the Muslim world shatter it to pieces? “The pitfalls of staging a Mr. Gay Syria competition provide a revealing insight into the plight of individuals but also some much bigger issues” – Allan Hunter, Screen Daily. “What begins as a documentary about the dangers they face ends as a positive picture of their emotional resilience” – India Stoughton, 1843 Magazine (The Economist).

The film we’ll be preceded by a campaigning activity, led by Amnesty LGBTI network, for LGBTI refugees This will take place at mac at 7pm. Ask at the festival desk for more information

Sunday 29th 6pm The Other Side of Home

Dir: Patrick Farrelly and Kate O’Callaghan 2017 | 80 mins | Language: English A documentary about the life and activism of Jaha Dukureh, a Gambian anti-female genital mutilation campaigner who returns to her country of birth to confront the harmful tradition that she and 200 million women and girls have undergone globally. Jaha was named by Time magazine as one of the most influential leaders in the world in 2016.

“Jaha’s Promise is a model example of how to highlight unthinkable strife without exploiting the subjects.” – Annabel Iwegbue, The Knock Turnal “In America, Jaha Dukureh has advised Barack Obama on the fight against female genital mutilation. But can she convince her own father, at home in the Gambia?” – Alexandra Topping, The Guardian Weekend *Winner of IFI Documentary Festival Audience Award 2017*

2016 | 40 mins | 12| Language: English + Post-screening discussion with the director, Naré Mkrtchyan, leading Armenian historian, Ara Sarafian, and Sabby Sagall. author of the ground-breaking study of Genocide: Final Solutions. Chaired by Michele Aaron, festival director/University of Warwick. In 1915, an estimated 1.5 million Armenians were killed by the Ottoman Turks, in what historians call the first genocide of the 20th century. In 2015, a Turkish woman named Maya discovers that her great grandmother was a survivor of the Armenian Genocide. As Maya wrestles with this new reality, she comes to embody the conflict that remains unresolved between the two people. She has two conflicting identities: one that suffers and the other that denies the suffering and its causes. “A universal story of identity, denial, and how the experience of genocide creates a ripple effect for future generations on both sides” – Anonymous, ARPA International Film Festival.

2016 | 147 mins | 15 | Language: English + Post-screening discussion with the director, Sarah Cordery, Middle East scholar and one of the ‘stars’ of the film, Sara Roy. Chaired by Dr Trevor McCrisken from the University of Warwick.

Notes to Eternity is a meditation on the IsraelPalestine conflict centring on the lives and ideas of four renowned critics of Israel: Noam Chomsky, Sara Roy, Norman Finkelstein and Robert Fisk. All four have strong personal connections to the issue that traverse and transcend historical and cultural lines. Filmed over a number of years in the Middle East, the United States and the United Kingdom, the film becomes an exploration of the very act of representing injustice suffered by another, and a testament to the realities of dispossession that reverberate through all narratives of colonization and forced displacement. “an impressive and affecting film, an inspired and inspiring example of world-class film craft – Steve Garden, The Lumière Reader Sponsored by the Centre for American and Canadian Studies at the University of Birmingham

Dir: Susanne Meures 2016 | 99 mins | Language: Persian, German, English subtitles +Post-screening Q&amp;A tbc Anoosh and Arash are at the centre of Tehran’s underground techno scene. Tired of hiding from the police and of their stagnating careers, they organise one last manic techno rave under dangerous circumstances in the desert. Back in Tehran they try their luck selling their illegally printed album without permission. When Anoosh is arrested, there seems to be no hope left. But then they receive a phone call from the biggest techno festival in the world. Once landed in Switzerland, the haze of the instant euphoria evaporates quickly when the seriousness of the situation starts to dawn on them “A hypnotic film. An intense and moving journey. Close and Personal. Like a liberating exorcism” – Muriel Del Don, Cineuropa “A brave, bold documentary” – Greg Klymkiw, The Film Corner

How can film affect, or even effect, personal, social and political change? By informing? By provoking? By moving us? By bearing witness? By inspiring action? Or just by connecting us to the plight of others and the mutual concern or even outrage of those we sit beside in darkened auditoriums or watching other screens elsewhere in the world Screening Rights aims to explore and exploit the power of film to move us in response to human adversity. If you’re interested in supporting the work of the Festival or collaborating with it, especially as it seeks to become more Midlands-wide in the coming years, please get in touch with us at:

The festival is indebted to its sponsors and to the research and cultural engagement support staff at the University of Birmingham, especially Sheena Robertson and Laura Milner. Many thanks to this year’s student volunteers from the Universities of Birmingham and Warwick.