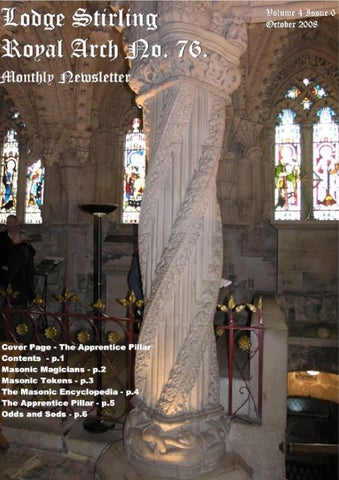 Welcome Brethren To the Lodge Stirling Royal Arch No.76 Newsletter

Brethren, welcome once again to the October edition of the Stirling Royal Arch No.76 newsletter. Thanks to everyone who e-mailed me about the new layout, I’m happy you like it. The newsletter is becoming very popular all over the world, it goes out to places as far apart as Australia, California, India, Canada, South Africa and even Rutherglen in Glasgow! We are now into the month of October, and the nights are starting to get darker earlier and colder and it will soon be getting to ‘Installation’ time here in Scotland., a busy time of the year. Anyway on to this month’s newsletter,

This Month’s contents…. In the main lectures and articles web site, we have another article by our old friend William Harvey, a very prolific Scottish Masonic writer and historian. The article this time is called, “The Altar of Freemasonry,” which has

been described as ‘A lecture on the first degree, Bro. Harvey emphasises the beauty of the Degree in a singularly attractive fashion. No mason should fail to secure a copy.’ An enjoyable read! [link] Page 2, there is an article about Bro. Harry Kellar, a Masonic magician, there have been many famous magicians who were masons including Harry Houdini, this is a nice wee article about one of them, Bro. Harry Kellar. Page 3, Scottish Masonic tokens, the last article about paper tokens was so well received that this follow-up is about ‘odd’ shaped Scottish tokens. Page 4, the Masonic Encyclopaedia, this month we look at the letter, ‘H’. Page 5, the Cover Story, the Apprentice Pillar, a short article describing the decorated pillar at Rosslyn Chapel, fact or fiction? Page 6, the ever popular ‘Odds and Sods’, this month we show another strange ‘Masonic’ handshake.

successor, Lance Burton. However, much of what we know of Kellar is learned from his friend Bro. Harry Houdini who was a frequent guest at Kellar&#39;s Los Angeles estate and interviewed the great magician to document the history of their craft: Long after Kellar had retired and just a few years before his death, Houdini cajoled his friend on stage for a mammoth show to benefit the families of the men who died when the troop transport Antilles was sunk by a German U-boat. Houdini arranged for Kellar to be carried off in triumph after his final public performance, as six thousand spectators sang Bro. Robert Burns poem &quot;Auld Lang Syne.&quot; An amusing anecdote related to Bro. Kellar&#39;s Masonic membership was when he was shipwrecked in the Bay of Biscay and his Blue Lodge diploma went to the bottom of the sea. It was later recovered by divers who brought up baggage from the sunken steamer. Bro. Kellar later remarked it had been viewed by Grand Master Neptune and returned.

Masonic Bro. Harry Kellar (1849-1922) was the founder of what has been described as the Royal Dynasty of American Magicians. Kellar began the tradition of passing the mantle of &quot;Greatest American Magician&quot; to a successor, his Masonic Brother, Howard Thurston. The lineage of the Kellar dynasty has over the years passed from Bro. Thurston to Masonic Bro. Dante (Harry Jansen, 1883-1955), to Lee Grable (1919 - present, especially famous for floating and revolving his wife in mid-air as she plays the piano - a variation of Levitation made famous by Bro. Kellar), and to the current

The next time we return to Masonic Magicians, we will look at the life and the Masonic career of Bro. Harry Houdini.

This diamond shaped Mark token is from Lodge Rossyln St. Clair No.606, notice The Apprentice Pillar!

This Mark token is from ‘The Ancient Lodge of Dundee No.49, a seven-sided penny, called a ‘Heptagon.’ A heart shape, naturally from a Lodge call, ‘Heart of Midlothian’ No. 832.

Another ‘unusual’ shape is this oval Mark Token, from Lodge St. Michael, Dumfries No.63. The Mark token is the shape of a shield and hails from Lodge Friendship 1712. These are just a few of the different shapes of mark tokens used in Lodges all over Scotland.

over its eyes until ready to strike at its prey.

The Latin nonus referred to the ninth hour of the day, that is, nine hours after sunrise. In the Medieval church it referred to the middle hour between midday and sunset, that is, about three o’clock P.M. In the course ot time it came to refer to any part of the middle of the day, and finally to twelve o’clock. The origin of our “High Twelve” is uncertain, but it is probable that it goes back to a time before “noon&quot; was generally used for twelve o’clock; the “high” doubtless refers to the sun, which at that time was at its highest point in the sky.

The second round in the theological and Masonic ladder, and symbolic of a hope in immortality. It is appropriately placed there, for, having attained the first, or faith in God, we are led by a belief in His wisdom and goodness to the hope of immortality. This is but a reasonable expectation; without it, virtue would lose its necessary stimulus and vice its salutary fear; life would be devoid of joy, and the grave but a scene of desolation. The ancients represented Hope by a nymph or maiden holding in her hand a bouquet of opening flowers, indicative of the coming fruit; but in modern and Masonic iconology, the science of Craft illustrations and likenesses, it is represented by a virgin leaning on an anchor, the anchor itself being a symbol of hope .

Hiram Abif A Hebrew word, Abif signifies &quot;his father.&quot; The word ab, or father, was frequently used by the Antient Jews as a title of honour. It is thus used in 2nd Chronicles, chap. Iv., verse 16, where we are told, &quot;the pots also and the shovels, and the flesh hooks and all their instruments, did Huram his father make to King Solomon.&quot;

Hoodwink “Hood” goes back to old German and Anglo Saxon, in which it referred to head covering, as in hat, hood, helmet, etc.; “wink,” in the same languages, meant to close the eyes, “wench,” “wince,” etc., being similarly derived. A hoodwink was therefore a headdress designed to cover the eyes. The popular use of the word is believed to go back to the old sport of falconry, once so popular, in which the falcon had a hood

Hour Glass An emblem connected with the Third Degree, to remind us by the quick passage of its sands of the transitory nature of human life. As a Masonic symbol it is of comparatively modern date, but the use of the hourglass as an emblem of the passage of time is older than our oldest known rituals. “The Hour-Glass is an emblem of human life; behold! how swiftly the sands run, and how rapidly our lives are drawing to a close. We cannot, without astonishment, behold the little particles which are contained in this machine, how they pass away almost imperceptibly.

Next Month the Letter ‘I’. The Webmaster

The Cover Storyâ&amp;#x20AC;Ś. The Apprentice Pillar.

The base of the Apprentice Pillar depicts eight dragons, from whose mouths emerge the vine that winds itself around the pillar. In Christian mythology, this represents the Tree of Life, but it probably was inspired by Norse mythology (perhaps due to Rosslyn Chapel&#39;s founder&#39;s connection with Orkney). The Norse Tree of Knowledge, Yggdrasil, holds up the heavens from the earth and the dragons of time gnaw at the roots of the Tree. Rosslyn Chapel is the home of the famous Apprentice Pillar, a decorated pillar that gets its name from a legend involving the mason in charge of the stonework in the chapel and his young apprentice. According to the legend, the master mason felt he needed to see the original inspiration for the design, located in Rome, before he could perform the complicated task of carving the column. But upon his return, he found that his upstart apprentice had completed the column. In a fit of jealous rage, the mason struck the apprentice on the head and killed him. The head of the unlucky apprentice is depicted in a corner opposite the organ loft, complete with a scar on his left temple.

Near the Apprentice Pillar is a Latin inscription that reads, &quot;Wine is strong, a king is stronger, women are stronger still, but truth conquers all.&quot; The text comes from the apocryphal book of Esdras.

Brethren, Iâ&amp;#x20AC;&amp;#x2122;m always on the look-out for interesting articles such as this for the newsletter. If anyone has a story/article/lectures/photos or even an idea, please get in touch, I will be only too happy to include it. Iâ&amp;#x20AC;&amp;#x2122;m especially looking for Masonic artefacts that you might think the Brethren of this newsletter might like to share.

Odds and Sods This month Lodge 76 offers no apology for revealing the most secret handshake of the highest degree available in America!

Until next month, Keep the faith! 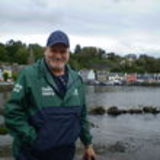