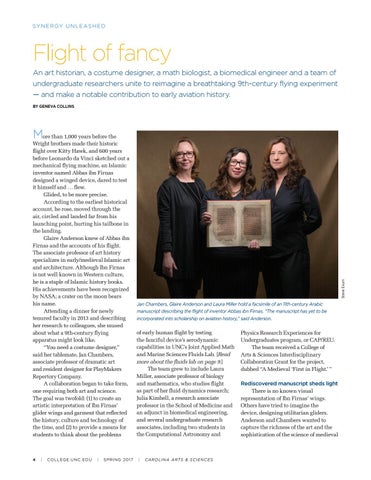 Flight of fancy An art historian, a costume designer, a math biologist, a biomedical engineer and a team of undergraduate researchers unite to reimagine a breathtaking 9th-century flying experiment — and make a notable contribution to early aviation history. BY GENEVA COLLINS

Wright brothers made their historic flight over Kitty Hawk, and 600 years before Leonardo da Vinci sketched out a mechanical flying machine, an Islamic inventor named Abbas ibn Firnas designed a winged device, dared to test it himself and … flew. Glided, to be more precise. According to the earliest historical account, he rose, moved through the air, circled and landed far from his launching point, hurting his tailbone in the landing. Glaire Anderson knew of Abbas ibn Firnas and the accounts of his flight. The associate professor of art history specializes in early/medieval Islamic art and architecture. Although Ibn Firnas is not well known in Western culture, he is a staple of Islamic history books. His achievements have been recognized by NASA; a crater on the moon bears his name. Attending a dinner for newly tenured faculty in 2013 and describing her research to colleagues, she mused about what a 9th-century flying apparatus might look like. “You need a costume designer,” said her tablemate, Jan Chambers, associate professor of dramatic art and resident designer for PlayMakers Repertory Company. A collaboration began to take form, one requiring both art and science. The goal was twofold: (1) to create an artistic interpretation of Ibn Firnas’ glider wings and garment that reflected the history, culture and technology of the time, and (2) to provide a means for students to think about the problems

Jan Chambers, Glaire Anderson and Laura Miller hold a facsimile of an 11th-century Arabic manuscript describing the flight of inventor Abbas ibn Firnas. “The manuscript has yet to be incorporated into scholarship on aviation history,” said Anderson.

of early human flight by testing the fanciful device’s aerodynamic capabilities in UNC’s Joint Applied Math and Marine Sciences Fluids Lab. [Read more about the fluids lab on page 9.] The team grew to include Laura Miller, associate professor of biology and mathematics, who studies flight as part of her fluid dynamics research; Julia Kimbell, a research associate professor in the School of Medicine and an adjunct in biomedical engineering, and several undergraduate research associates, including two students in the Computational Astronomy and

Physics Research Experiences for Undergraduates program, or CAP/REU. The team received a College of Arts &amp; Sciences Interdisciplinary Collaboration Grant for the project, dubbed “A Medieval ‘First in Flight.’ ” Rediscovered manuscript sheds light There is no known visual representation of Ibn Firnas’ wings. Others have tried to imagine the device, designing utilitarian gliders. Anderson and Chambers wanted to capture the richness of the art and the sophistication of the science of medieval UNC College of Arts and Sciences