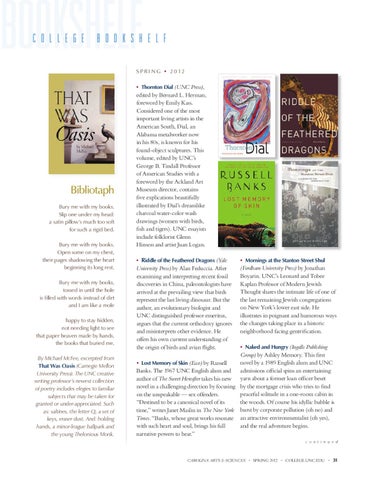 Bibliotaph Bury me with my books. Slip one under my head: a satin pillow’s much too soft for such a rigid bed. Bury me with my books. Open some on my chest, their pages shadowing the heart beginning its long rest. Bury me with my books, tossed in until the hole is filled with words instead of dirt and I am like a mole happy to stay hidden, not needing light to see that paper heaven made by hands, the books that buried me. By Michael McFee, excerpted from That Was Oasis (Carnegie Mellon University Press). The UNC creative writing professor’s newest collection of poetry includes elegies to familiar subjects that may be taken for granted or under-appreciated. Such as: saltines, the letter Q, a set of keys, eraser dust. And: holding hands, a minor-league ballpark and the young Thelonious Monk.

• Thornton Dial (UNC Press), edited by Bernard L. Herman, foreword by Emily Kass. Considered one of the most important living artists in the American South, Dial, an Alabama metalworker now in his 80s, is known for his found-object sculptures. This volume, edited by UNC’s George B. Tindall Professor of American Studies with a foreword by the Ackland Art Museum director, contains five explications beautifully illustrated by Dial’s dreamlike charcoal water-color wash drawings (women with birds, fish and tigers). UNC essayists include folklorist Glenn Hinson and artist Juan Logan. • Riddle of the Feathered Dragons (Yale University Press) by Alan Feduccia. After examining and interpreting recent fossil discoveries in China, paleontologists have arrived at the prevailing view that birds represent the last living dinosaur. But the author, an evolutionary biologist and UNC distinguished professor emeritus, argues that the current orthodoxy ignores and misinterprets other evidence. He offers his own current understanding of the origin of birds and avian flight.

• Mornings at the Stanton Street Shul (Fordham University Press) by Jonathan Boyarin. UNC’s Leonard and Tobee Kaplan Professor of Modern Jewish Thought shares the intimate life of one of the last remaining Jewish congregations on New York’s lower east side. He illustrates in poignant and humorous ways the changes taking place in a historic neighborhood facing gentrification.

• Naked and Hungry (Ingalls Publishing Group) by Ashley Memory. This first novel by a 1989 English alum and UNC • Lost Memory of Skin (Ecco) by Russell admissions official spins an entertaining Banks. The 1967 UNC English alum and author of The Sweet Hereafter takes his new yarn about a former loan officer beset novel in a challenging direction by focusing by the mortgage crisis who tries to find peaceful solitude in a one-room cabin in on the unspeakable — sex offenders. the woods. Of course his idyllic bubble is “Destined to be a canonical novel of its time,” writes Janet Maslin in The New York burst by corporate pollution (oh no) and Times. “Banks, whose great works resonate an attractive environmentalist (oh yes), and the real adventure begins. with such heart and soul, brings his full narrative powers to bear.” c o n t i n u e d

Alumni magazine of the College of Arts and Sciences at UNC-Chapel Hill. UNC College of Arts and Sciences

More from UNC College of Arts and Sciences