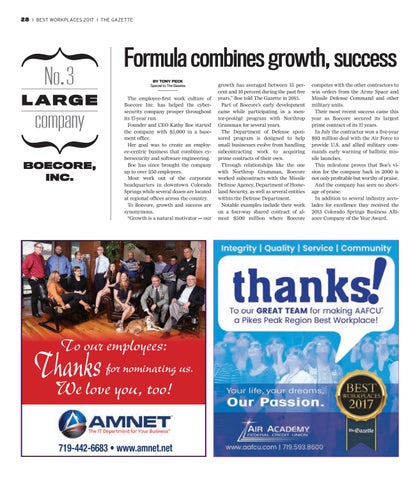 Special to The Gazette —

The employee-first work culture of Boecore Inc. has helped the cybersecurity company prosper throughout its 17-year run. Founder and CEO Kathy Boe started the company with $5,000 in a basement office. Her goal was to create an employee-centric business that combines cybersecurity and software engineering. Boe has since brought the company up to over 250 employees. Most work out of the corporate headquarters in downtown Colorado Springs while several dozen are located at regional offices across the country. To Boecore, growth and success are synonymous. “Growth is a natural motivator — our

Thanks We love you, too!

growth has averaged between 15 percent and 16 percent during the past five years,” Boe told The Gazette in 2015. Part of Boecore’s early development came while participating in a mentor-protégé program with Northrop Grumman for several years. The Department of Defense sponsored program is designed to help small businesses evolve from handling subcontracting work to acquiring prime contracts of their own. Through relationships like the one with Northrop Grumman, Boecore worked subcontracts with the Missile Defense Agency, Department of Homeland Security, as well as several entities within the Defense Department. Notable examples include their work on a four-way shared contract of almost $500 million where Boecore

competes with the other contractors to win orders from the Army Space and Missile Defense Command and other military units. Their most recent success came this year as Boecore secured its largest prime contract of its 17 years. In July the contractor won a five-year $93 million deal with the Air Force to provide U.S. and allied military commands early warning of ballistic missile launches. This milestone proves that Boe’s vision for the company back in 2000 is not only profitable but worthy of praise. And the company has seen no shortage of praise. In addition to several industry accolades for excellence they received the 2013 Colorado Springs Business Alliance Company of the Year Award. 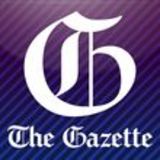