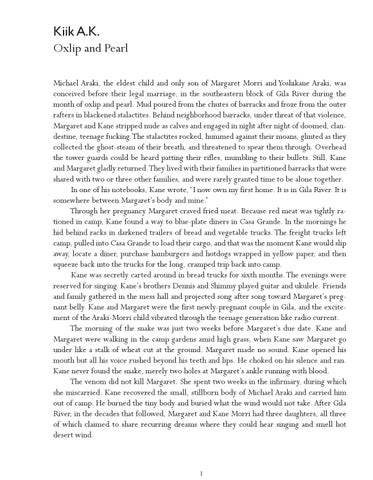 Kiik A.K. Oxlip and Pearl Michael Araki, the eldest child and only son of Margaret Morri and Yoshikane Araki, was conceived before their legal marriage, in the southeastern block of Gila River during the month of oxlip and pearl. Mud poured from the chutes of barracks and froze from the outer rafters in blackened stalactites. Behind neighborhood barracks, under threat of that violence, Margaret and Kane stripped nude as calves and engaged in night after night of doomed, clandestine, teenage fucking. The stalactites rocked, hummed against their moans, glinted as they collected the ghost-steam of their breath, and threatened to spear them through. Overhead the tower guards could be heard patting their rifles, mumbling to their bullets. Still, Kane and Margaret gladly returned.They lived with their families in partitioned barracks that were shared with two or three other families, and were rarely granted time to be alone together.    In one of his notebooks, Kane wrote, “I now own my first home. It is in Gila River. It is somewhere between Margaret’s body and mine.”    Through her pregnancy Margaret craved fried meat. Because red meat was tightly rationed in camp, Kane found a way to blue-plate diners in Casa Grande. In the mornings he hid behind racks in darkened trailers of bread and vegetable trucks. The freight trucks left camp, pulled into Casa Grande to load their cargo, and that was the moment Kane would slip away, locate a diner, purchase hamburgers and hotdogs wrapped in yellow paper, and then squeeze back into the trucks for the long, cramped trip back into camp.    Kane was secretly carted around in bread trucks for sixth months. The evenings were reserved for singing. Kane’s brothers Dennis and Shimmy played guitar and ukulele. Friends and family gathered in the mess hall and projected song after song toward Margaret’s pregnant belly. Kane and Margaret were the first newly-pregnant couple in Gila, and the excitement of the Araki-Morri child vibrated through the teenage generation like radio current.    The morning of the snake was just two weeks before Margaret’s due date. Kane and Margaret were walking in the camp gardens amid high grass, when Kane saw Margaret go under like a stalk of wheat cut at the ground. Margaret made no sound. Kane opened his mouth but all his voice rushed beyond his teeth and lips. He choked on his silence and ran. Kane never found the snake, merely two holes at Margaret’s ankle running with blood.    The venom did not kill Margaret. She spent two weeks in the infirmary, during which she miscarried. Kane recovered the small, stillborn body of Michael Araki and carried him out of camp. He burned the tiny body and buried what the wind would not take. After Gila River, in the decades that followed, Margaret and Kane Morri had three daughters, all three of which claimed to share recurring dreams where they could hear singing and smell hot desert wind.