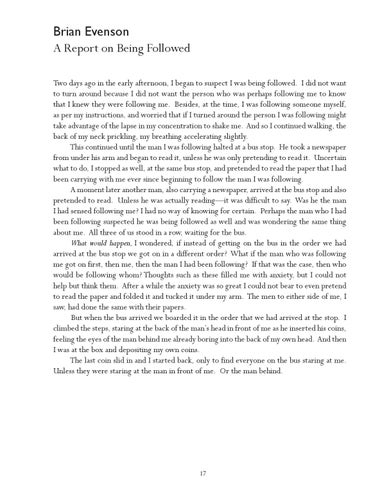 Brian Evenson A Report on Being Followed Two days ago in the early afternoon, I began to suspect I was being followed. I did not want to turn around because I did not want the person who was perhaps following me to know that I knew they were following me. Besides, at the time, I was following someone myself, as per my instructions, and worried that if I turned around the person I was following might take advantage of the lapse in my concentration to shake me. And so I continued walking, the back of my neck prickling, my breathing accelerating slightly.    This continued until the man I was following halted at a bus stop. He took a newspaper from under his arm and began to read it, unless he was only pretending to read it. Uncertain what to do, I stopped as well, at the same bus stop, and pretended to read the paper that I had been carrying with me ever since beginning to follow the man I was following.    A moment later another man, also carrying a newspaper, arrived at the bus stop and also pretended to read. Unless he was actually reading—it was difficult to say. Was he the man I had sensed following me? I had no way of knowing for certain. Perhaps the man who I had been following suspected he was being followed as well and was wondering the same thing about me. All three of us stood in a row, waiting for the bus.   What would happen, I wondered, if instead of getting on the bus in the order we had arrived at the bus stop we got on in a different order? What if the man who was following me got on first, then me, then the man I had been following? If that was the case, then who would be following whom? Thoughts such as these filled me with anxiety, but I could not help but think them. After a while the anxiety was so great I could not bear to even pretend to read the paper and folded it and tucked it under my arm. The men to either side of me, I saw, had done the same with their papers.    But when the bus arrived we boarded it in the order that we had arrived at the stop. I climbed the steps, staring at the back of the man’s head in front of me as he inserted his coins, feeling the eyes of the man behind me already boring into the back of my own head. And then I was at the box and depositing my own coins.    The last coin slid in and I started back, only to find everyone on the bus staring at me. Unless they were staring at the man in front of me. Or the man behind. 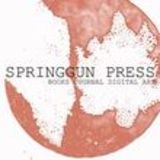