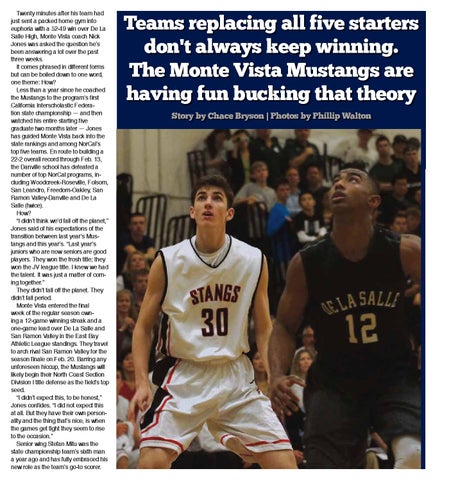 Twenty minutes after his team had just sent a packed home gym into euphoria with a 52-49 win over De La Salle High, Monte Vista coach Nick Jones was asked the question he’s been answering a lot over the past three weeks. It comes phrased in different forms but can be boiled down to one word, one theme: How? Less than a year since he coached the Mustangs to the program’s first California Interscholastic Federation state championship — and then watched his entire starting five graduate two months later — Jones has guided Monte Vista back into the state rankings and among NorCal’s top five teams. En route to building a 22-2 overall record through Feb. 13, the Danville school has defeated a number of top NorCal programs, including Woodcreek-Roseville, Folsom, San Leandro, Freedom-Oakley, San Ramon Valley-Danville and De La Salle (twice). How? “I didn’t think we’d fall off the planet,” Jones said of his expectations of the transition between last year’s Mustangs and this year’s. “Last year’s juniors who are now seniors are good players. They won the frosh title; they won the JV league title. I knew we had the talent. It was just a matter of coming together.” They didn’t fall off the planet. They didn’t fall period. Monte Vista entered the final week of the regular season owning a 12-game winning streak and a one-game lead over De La Salle and San Ramon Valley in the East Bay Athletic League standings. They travel to arch rival San Ramon Valley for the season finale on Feb. 20. Barring any unforeseen hiccup, the Mustangs will likely begin their North Coast Section Division I title defense as the field’s top seed. “I didn’t expect this, to be honest,” Jones confides. “I did not expect this at all. But they have their own personality and the thing that’s nice, is when the games get tight they seem to rise to the occasion.” Senior wing Stefan Mitu was the state championship team’s sixth man a year ago and has fully embraced his new role as the team’s go-to scorer. 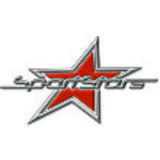