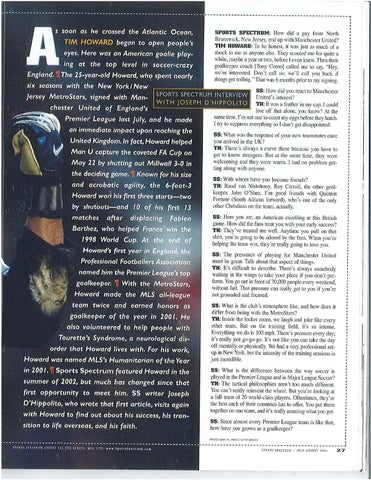 Brunswick, New Jersey, end up with Manchester United? TIM HOWARD: To be honest, it was just as much of a

shock to me as anyone else. They scouted me for quite a while, maybe a year or two, before I even knew. Then their goalkeeper coach [Tony Caton] called me to say, "Hey, we're interested. Don't call us; we' ll call you back if things get rolling." That was 6 months prior to my signing. SS: How did you react to Manchester

United's interest? TH: It was a feather in my cap. I could

live off that alone, you know? At the same time, I'mnot one to count my eggs before they hatch. I try to suppress evetything so I don't get disappointed. SS: What was the response of your new teammates once

you arrived in the UK? TH: There's always a curve there because you have to

get to know strangers. But at the same time, they were welcoming and they were warm. I had no problem getting along with anyone. SS: With whom have you become friends? TH: Ruud van Nistelrooy. Roy Carroll, the other goal-

keeper. John O'Shea. I'm good friends with Quinton F01tune (South African forward), who's one of the only other Christians on the team, actually. SS: Here you are, an American excelling at this British

game. How did the fans treat you with your early success? TH: They' ve treated me well. Anytime you pull on that

shitt, you're going to be adored by the fans. When you're helping the team win, they're really goi ng to love you. 55: The pressures of playing for Manchester United

must be great. Talk about that aspect of things. TH: It's difficult to describe. There's always somebody

waiting in the wings to take your place if you don't perform. You go out in front of 70,000 people evet)' weekend, without fail. That pressure can really get to you if you're not grounded and focused. 55: What is the club's atmosphere like, and how does it differ from being with the MetroStars? TH: Inside the locker room, we laugh and joke like every other team. But on the training field, it's so intense. Evetything we do is 100 mph. There's pressure every day; it's really just go-go-go. It's not like you can take the day off mentally or physically. We had a very professional setup in New York, but the intensity of the training sessions is just incredible. 55: What is the difference between the way soccer is

played in the Premier League and in Major League Soccer? TH: The tactical philosophies aren't too much different.

You can't really reinvent the wheel. But you're looking at a full team of 20 world-class players. Oftentimes, they're the best each of their countries has to offer. You put them together on one team, and it's really amazing what you get. 55: Since almost every Premier League team is like that, how have you grown as a goalkeeper? PHOTO: GA.AY M . PRIOR/ GEIT't' IMAGES 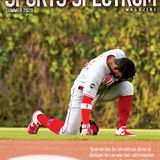