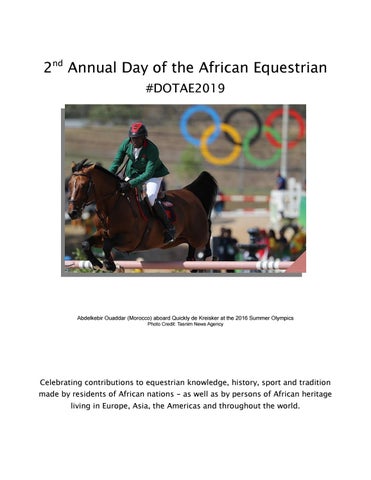 Celebrating contributions to equestrian knowledge, history, sport and tradition made by residents of African nations - as well as by persons of African heritage living in Europe, Asia, the Americas and throughout the world.

About Tom Bass: Tom Bass was born enslaved in Columbia, Missouri. He played a prominent role both in the establishment of the American Royal Horse Show in Kansas City and in the establishment of Mexico, Missouri as the ‘Saddle Horse Capital of the World’. Highlights of his extraordinary career include championships at two world’s fairs and more than 2,000 blue ribbons. The Tom Bass bit, developed to give the rider control without causing pain to the horse, is still in use today. During his lifetime, Bass performed before such luminaries as Queen Marie of Romania, William Jennings Bryan, P.T. Barnum and U.S. Presidents Grover Cleveland, William McKinley, Theodore Roosevelt, William Howard Taft and Calvin Coolidge. His more prominent clients included Mr. Roosevelt, Buffalo Bill Cody, AnheuserBusch executives Adolphus and August Busch and Will Rogers.

Panelists Julian Hyde Julian Hyde is one of Jamaica&#39;s most accomplished equestrians. He started riding at the age of 8 years old at Ponderosa Farm in Bog Walk and has since competed in numerous competitions both locally and internationally. His coach, Mrs. Betty Wates, has been instrumental in developing him as both a rider and horseman and still plays an important role in his journey. Julian has been successful at the FEI Children&#39;s Level winning both dressage and show jumping titles multiple times. He is one of the only riders from Jamaica to be successful in both the Children&#39;s FEI Showjumping and Dressage in the same year. At the FEI Adult Level, he has won in both Dressage and Showjumping. Hyde has also been successful competing in the CEA Showjumping competition winning in Jamaica, Bermuda, Trinidad and Tobago, the Cayman Islands, and Antigua. Carrying Jamaica’s flag, he has competed at the PSI World Dressage in Germany placing 8th, and has twice competed at the annual German Friendships. Julian has completed both his level 1 and 2 FEI Coaches course in Barbados and the Cayman Islands respectively and is one of the handful of certified level 2 coaches in the Caribbean. As a showjumper, he competed in the 2015 Longines’ China League competition in Beijing. In 2016, Hyde placed 4th in the farewell competition at the Finals of the FEI World Jumping Classics in Rabat, Morocco.

Most recently, Julian has focused on developing the sport in Jamaica. While managing and teaching at two different stables, he is developing young horses which can help to keep the sport moving forward locally. Currently Jamaicaâ&amp;#x20AC;&amp;#x2122;s national team coach, he has successfully taken teams to competitions throughout the Caribbean, Central and South America. Most recently, Hyde completed a Level 3 workshop in Quito, Ecuador. He continues to strive to improve his knowledge of our beloved horses and to contribute to the sport in Jamaica to the best of his ability. Stanford Moore Stanford E. Moore&#39;s love of horses began when he was a little boy growing up on a farm back in Ahoskie, North Carolina. His Grandfather had two horses that he immediately fell inl ove with. One a black stallion named &quot;Stubby&quot; because of his headstrong nature and a one-eyed grey mare named &quot;Snowball&quot;, which he loved dearly. The horses were a big part of his young life back then living on hundreds of acres. Early morning farm work before and after school was a way of life, but &quot;two horses can sure take the work out of it&quot;. Moore&#39;s grandfather Buster &quot;Bus&quot; Moore passed away when he was an early teen with all of the livestock sold by the family. Even so, the love of horses never left and Moore vowed that, when in position to, he would own horses of his own. After high school Moore joined the Army, where he served for nearly four years. He decided to depart after returning home from Desert Storm. He studied Aero Science in college and was always naturally gifted in Art. After college, Moore moved to Raleigh, North Carolina and furthered his education in pursuit of an electrical engineering career. He was later hired by two major corporations in the Research Triangle Park in engineering research and design. After meeting his wife Shekina in 1997, he was soon introduced to her uncle and his mentor, Pastor Dr. Arlee Griffin, Jr. He was a lover of horses and the owner of Arkofa Farms, a 200 acre Quarter Horse and Thoroughbred Breeding farm. Volunteering on the farm, Moore began learning true horsemanship from the staff of trainers. He purchased a 16.3 hand bay appendix bred quarter/thoroughbred fresh off of the track named &quot;Good Grief I&#39;m A Hero&quot; and he immediately fell in love with him. The rest is historyâ&amp;#x20AC;Ś Moore went on to walk away from Corporate America and partnered with an Inc. 500 telecom/energy company where he became one of it&#39;s Senior VPs. He is the visionary and Publisher of Black Reins Magazine with Literacy Moguls (TM) Publishing Company, spotlighting the black equestrians, horsemen, cowboys and farm/ranchers. Moore is raising awareness of a strong tradition rarely seen in the many novels, films and television.

Julian Seaman Julian Seaman has been Media Director of the Badminton Horse Trials since 2002 and was in charge of equestrian media at the 2012 Olympics. He has ridden at Badminton and Burghley many times and also completed the Grand National course at Aintree in a one circuit amateur race. He has published eight books on equestrian subjects. He is also an artist and designer. Hillary Tucker Hillary Tucker joined Alltech in 2012. She presently serves as an Equine Services Specialist and Account Manager for McCauley’s – An Alltech Company. McCauley’s was established in 1938 and is an equineonly feed and nutrition company. Hillary provides marketing, sales, and nutrition support to key farm and retail accounts. She works extensively with trainers and breeders, focusing on Saddlebreds, Rocky Mountain Horses, Quarter Horses, and Thoroughbreds. Hillary is a native Kentuckian, who grew up riding Saddlebreds, off-track Thoroughbreds, and Paso Finos. She attended the University of Kentucky, where she studied Agricultural Communications. While studying at UK, Hillary began working for sales consignors at Keeneland and Fasig-Tipton. She later went on to manage a small Thoroughbred breeding operation. Her connections in the Thoroughbred industry ultimately led her to the feed industry. Before joining Alltech, Hillary worked founding the retail and equine business for an Alltech partner company. Hillary and her family own and show Rocky Mountain Horses. As the chair of the Rocky Mountain Horse Foundation and the Rocky Mountain Horse Marketing Board, Hillary works to preserve the genetic integrity and oral history of this Kentucky heritage breed. Her passion for the Kentucky horse industry has led her to serve in Kentucky Women In Agriculture, The Kentucky Mountain Horse Association, The United Mountain Horse Association, and as a mentor and volunteer with the Rocky Mountain Horse Youth Association. Leslie Wylie Leslie Wylie is a journalist and editor of the website Eventing Nation, and founder of sister sites Horse Nation and Jumper Nation. She has written about diversity and equality in equestrian sport and beyond and is involved with social activism efforts in her community. Her work has appeared in equestrian publications such as Practical Horseman and The Chronicle of the Horse, as well as a number of alternative and mainstream media outlets including The Washington Post. She lives in Knoxville, TN, with her husband, pony, cat and 5-month-old son.

Special Thanks To: (in alphabetical order)

Held at the Tryon International Equestrian Center (site of the 2018 FEI World Equestrian Games), the 2019 Tom Bass Seminar examined issues related to diversity in the equestrian industry, as part of the 2nd Annual Day of the African Equestrian (#DOTAE2019). The 2019 DOTAE Gala was held at Harambee Farm, a private venue in the Green Creek Township of Polk County (NC). The program was coordinated by The AFRICAN CONNECTIONS Research and Education Fund, Inc. in association with SportsQuest International, LLC. 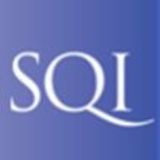