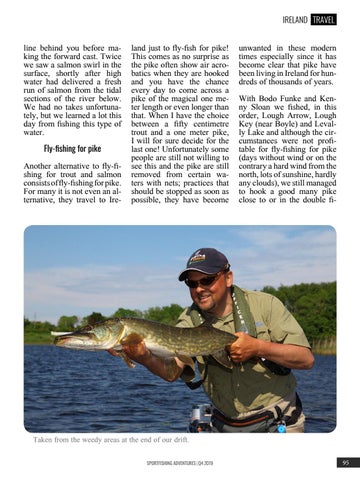 line behind you before making the forward cast. Twice we saw a salmon swirl in the surface, shortly after high water had delivered a fresh run of salmon from the tidal sections of the river below. We had no takes unfortunately, but we learned a lot this day from fishing this type of water. Fly-fishing for pike Another alternative to fly-fishing for trout and salmon consists of fly-fishing for pike. For many it is not even an alternative, they travel to Ire-

land just to fly-fish for pike! This comes as no surprise as the pike often show air acrobatics when they are hooked and you have the chance every day to come across a pike of the magical one meter length or even longer than that. When I have the choice between a fifty centimetre trout and a one meter pike, I will for sure decide for the last one! Unfortunately some people are still not willing to see this and the pike are still removed from certain waters with nets; practices that should be stopped as soon as possible, they have become

unwanted in these modern times especially since it has become clear that pike have been living in Ireland for hundreds of thousands of years. With Bodo Funke and Kenny Sloan we fished, in this order, Lough Arrow, Lough Key (near Boyle) and Levally Lake and although the circumstances were not profitable for fly-fishing for pike (days without wind or on the contrary a hard wind from the north, lots of sunshine, hardly any clouds), we still managed to hook a good many pike close to or in the double fi-

Taken from the weedy areas at the end of our drift. SPORTFISHING ADVENTURES | Q4 2019